For autism research, rats may be new top model 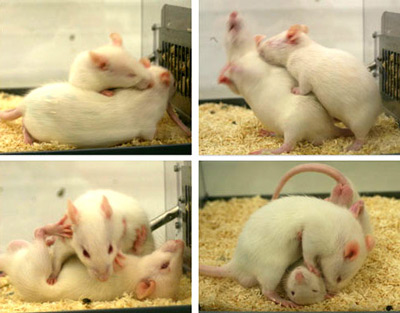 Two new rat models of autism don’t roughhouse like normal rats do, and show some compulsive behaviors, according to a study published in April in Behavioral Neuroscience1. The models underscore the advantage rats have over mice in modeling complex social behaviors.

Normal young rats are playfully aggressive creatures, wrestling, boxing and pinning their siblings down by the neck. The mutants tend to avoid these behaviors and ignore any requests to play. One of the models has a mutation that prevents the production of FMRP, the protein missing in fragile X syndrome, a single-gene disorder that resembles autism. The other rat lacks NLGN3, a gene mutated in many people with autism.

“As the first publication of behavioral phenotypes from the new knockout rat technology, [this] is a landmark paper,” says Jacqueline Crawley, professor of psychiatry at the University of California, Davis, who was not involved in the study.

The rats are two of eight autism models engineered by Sigma Life Science, a St. Louis-based research company. The others are missing the autism-linked genes MeCP2, NRXN1, PTEN, CNTNAP2, MET and mGluR5, respectively.

The rats debuted nearly three years ago at the 2011 Society for Neuroscience annual meeting in Washington, D.C. Since then, researchers have characterized them using multiple measures of their behavior.

Among autism researchers, there is universal excitement about rats’ potential as autism models.

“I was so pleased when I first heard that they were making these rats, because mice are not like humans,” says Valerie Bolivar, director of the Mouse Behavioral Phenotype Analysis Core at the New York State Department of Health in Albany, who was not involved in the study. Rats are not like humans either, “but if we have at least two mammals and can examine the same genes in those mammals, it’s going to be wonderful,” she says.

For example, if a mutation triggers similar autism-like features in both rats and mice, it would be a clear indication of that mutation’s significance for the disorder, she says.

In the new study, the researchers noted that female NLGN3 mutant rats, but not controls or FMR1 rats, chew compulsively through their water bottles. The researchers say they suspect that this behavior mirrors the repetitive behaviors seen in people with autism.

They then put wooden blocks in the rats’ cages. The FMR1 mutant rats chewed on these blocks much more than controls did, but the NLGN3 mutants ignored the blocks, continuing to chew on their bottles. This suggests that the NLGN3 mutants have trouble switching their focus, a common symptom in people with autism, the researchers say.

Turning this observation of chewing behavior into a new assay for repetitive behavior is “insightful,” says Crawley.

Researchers are still working out which behavioral tests to use in rats to best measure symptoms of autism, says Meera Modi, a postdoctoral fellow at the pharmaceutical company Pfizer in Cambridge, Massachusetts. Modi is studying autism-like behaviors in a rat that lacks the autism-linked SHANK2 gene.

Nearly every rat model of autism so far shares one striking feature, she says: The pups don’t play. This is also true of the new FMR1 and NLGN3 mutant rats — they spend far less time wrestling and boxing with their peers than controls do.

This consistency among rat models of autism is notable, as researchers have struggled to find similarly reliable patterns of social behavior in autism mouse models. For example, some mice with a mutation in the NLGN3 gene have social deficits, whereas others with the same mutation do not.

The behavior of the NLGN3 mutant rats supports the idea that the gene is important for social behavior, says lead researcher Richard Paylor, professor of medicine and human genetics at the Baylor College of Medicine in Houston, Texas. “The outlier may be the single mouse paper suggesting there are no social differences with mutations in NLGN3,” he says.

The variation seen among the mouse models is often ascribed to the mice’s different genetic backgrounds. But it may also relate to the limitations of studying social behavior in mice.

To test a mouse’s social interest, researchers place it in a cage that has two side chambers, one of which holds another mouse. Mice normally prefer to investigate the mouse rather than spend time in the empty space. Some of the autism mouse models spend as much or more time in the empty cage, which researchers take to be an indication of social deficits.

But this test relies on an artificial scenario, in which the new mouse is caged and cannot initiate social contact, says Paylor. Tellingly, the FMR1 and NLGN3 rat models both ignore social play, but act normally in the three-chamber test.

“Having a barrier between animals may completely alter the way animals normally interact, and certainly in young rats it prevents rough-and-tumble play behavior,” says Paylor.

This difference in social behavior is one reason that rats were the model of choice for many decades, particularly in neuroscience research.

Rats have bigger brains than mice do, which makes it easier for researchers to manipulate their neurons and record brain activity. There is also a long history of using rats to test drug dosage and toxicity.

Rats are also much easier to train, and better suited for sophisticated tests of cognitive ability than mice are, says Bolivar. “Rats are like dogs; mice are like cats,” she says. “You can almost believe that rats care what you think.”

Juvenile mice are difficult to study, and so ‘bouncy’ and hyperactive that researchers call them them ‘popcorn’ mice and avoid working with them. Because autism is a developmental disorder, it’s important to be able to work with young animals, she says.

But the ease with which researchers can switch genes on and off in mice has made them the mainstay of animal research since the early 1990s.

In recent years, however, the genetic tractability of rats has caught up with that of mice. Cutting-edge technology now allows researchers to snip out and insert chunks of the genome into rats, and even into primates. Even as rat models rise in popularity, however, mice are likely to remain popular models for autism research.

“We hold the mouse in one hand and the rat in the other,” says Bolivar. “The goal is to take advantage of the best of both worlds and combine them.”