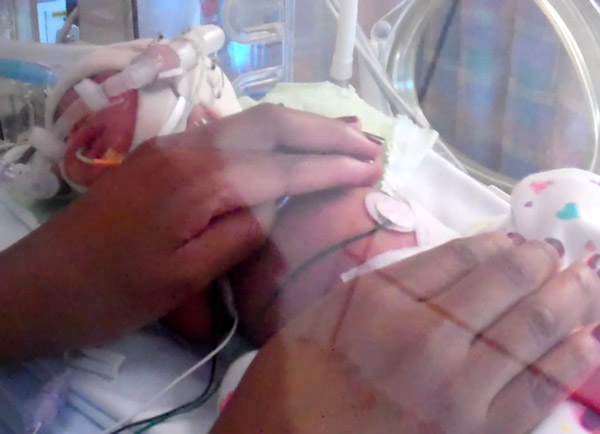 Comforting care: A therapy that includes gentle touch to build emotional bonds lowers the risk of autism in premature babies.

Loving touch and physical proximity to other people wire the social brain right from the earliest days after birth, and problems in the response to touch may play a fundamental role in autism. This picture emerges from unpublished results presented by several teams at the 2014 Society for Neuroscience annual meeting in Washington, D.C.

The findings have implications for how premature infants are treated. It suggests that a therapy that emphasizes touch to build emotional bonds could act as the brain equivalent of steroid shots given to protect the infants’ lungs. The studies also challenge how scientists understand autism.

Much of autism research tends to focus on complex features such as language and social behavior. But this complexity may stem from something basic and fundamental: Researchers are discovering that the sense of touch literally binds members of our species together.

One powerful example is an intervention for preterm infants that includes several components. Mothers of preterm infants place cloths that smell like their own skin in the baby’s incubator, and receive cloths that smell like their babies. If her baby is too fragile to hold in her arms, the mother can gently touch the baby’s palm with one hand to trigger the grasp reflex. She can also gently but firmly press both hands around her baby’s torso, which often calms babies. Also crucial, mothers speak in emotional tones while touching the baby in these ways.

All of this builds emotional connections between the mothers and their infants, setting the babies’ brains on a positive developmental path.

A number of studies have found that children born prematurely are at higher-than-average risk of autism, although the mechanisms underlying this finding are unclear. Preliminary data presented Sunday suggest that this approach lowers the babies’ risk of autism at 18 months.

Only 10 percent of children who were part of this program scored high on the Modified Checklist for Autism in Toddlers (M-CHAT), a common screening tool for the disorder, compared with 25 percent of the children who received standard care.

If touch strengthens social bonds, atypical responses to touch can disrupt them, a phenomenon that may play a role in autism.

Many individuals with autism dislike being touched, especially in gentle ways such as with a caress or a hug. “This is not just another example of a sensory abnormality in autism,” says Francis McGlone, professor of neuroscience at Liverpool John Moores University in the U.K. “This is the precursor to everything we see downstream.”

McGlone has spent the past 25 years working to establish the fundamental importance of a class of nerve fibers called c-tactile afferents in human social bonds. These nerve fibers are found in hairy skin, such as on the back and the forearm. And the best way to activate them is with a slow, gentle stroke of about 3 centimeters per second — or, to put it in everyday terms, a fond caress. (More broadly, any touch that activates c-tactile afferents is called emotional or affective touch.)

McGlone’s unpublished research, presented Monday at the conference, shows that adults who scored in the top third on the Autism Spectrum Quotient (AQ) — a 50-item questionnaire designed to measure autism-related traits in the general population — respond differently to touch than do those who scored in the bottom third.

Both groups find slow strokes on the arm more pleasant than faster strokes of about 30 centimeters per second. But the 25 people who scored high on the AQ have a less pronounced preference for the slow touch than the 52 people with low scores.

McGlone’s team also placed electrodes on the participants’ fingers to record their galvanic skin response, a general measure of the nervous system’s arousal, when being touched. They assessed the participants’ response to the slow and fast touches, as well as to a light touch on the shoulder. (The shoulder touch also activates c-tactile afferents, though less strongly than forearm stroking, McGlone says.)

This may be because their c-tactile fibers are themselves different or because something is awry in how their brain processes information from them.

Intriguingly, the degree to which a person finds slow forearm-stroking pleasant depends on a network of regions, including the superior temporal sulcus and the mirror neuron system, according to another unpublished study presented Monday. Both of these areas have been strongly implicated in autism.

“Now we have a hypothesis that dysfunction in this system may lie behind the altered touch perception in people with autism,” says Monika Davidovic, a graduate student working with Håkan Olausson at the University of Gothenburg in Sweden, who presented the work.

C-tactile fibers are at work within the first few weeks of life, according to another unpublished study presented Monday. Olausson and his colleagues used functional near infrared imaging (fNIRs) to show that the brains of infants who are 6 to 10 weeks old respond differently to different speeds of forearm stroking.

“The infant brain can distinguish between slow, social touch and fast, nonsocial touch,” says Olausson, who is McGlone’s longtime collaborator in the effort to understand c-tactile afferents.

No one has directly tested whether the nerve fibers also function in preterm infants. “That would be really interesting,” Olausson says.

But other results from the preterm intervention study suggest that even in these infants, social touch shapes the brain. In that study, the researchers used electroencephalography to record babies’ brain activity at about 35 weeks gestation and again at 40 weeks, or full term.

“They’re thought to wire up the different sensory areas that need infrastructure laid down before the baby comes out,” says developmental electrophysiologist Philip Grieve, a member of the research team.

Among infants who receive standard care, those who have less bursting activity at 35 weeks gestation go on to have lower cortical power at 40 weeks, the researchers found. Cortical power is a measure of brain function that is linked to children’s better cognitive function as toddlers. Infants who have lower bursting activity at 35 weeks also have higher M-CHAT scores, indicating greater risk for autism, when they are 18 months old.

Early bursting activity at 35 weeks gestation could therefore be used as a screen for autism risk in preterm infants, the researchers say.

More importantly, infants who receive the intervention don’t show the association between cortical bursting and autism risk. In that group, early bursting activity at 35 weeks predicts neither cortical power at 40 weeks nor M-CHAT scores at 18 months.

“With our intervention, even if you have low bursting, you still have high power,” says study leader Martha Welch, co-director of the Nurture Science Program at Columbia University Medical Center in New York and chief architect of the intervention.

Touch is not the only component of this therapy. The program is aimed more broadly at creating emotional engagement between mother and baby, which also comes from sight, sound and smell. And the exact mechanisms by which the therapy changes brain activity and lowers autism risk are unknown. “We’re going to try to tease out what the secret sauce is,” says Robert Ludwig, managing director of the Nurture Science Program.

The researchers don’t emphasize the kind of gentle stroking that best activates c-tactile fibers. Welch says that mothers of preterm infants often have trouble touching their babies in this way, perhaps because they are too anxious about the baby’s well-being. Instead, they tend to give the baby fast, feathery strokes, which the baby withdraws from, an experience that frustrates the mother and disrupts emotional bonding.

Welch says these observations led her to suggest that the mothers put their hands gently but firmly around the baby’s torso. “The ventrum is chockablock full with pressure receptors,” Welch says. In the absence of a fond caress, it’s no surprise they respond so strongly to a loving squeeze.