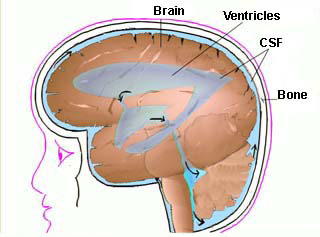 Vital vitamin: Folate travels from the peripheral blood supply into the cerebrospinal fluid by binding to receptors on brain ventricles.

Vital vitamin: Folate travels from the peripheral blood supply into the cerebrospinal fluid by binding to receptors on brain ventricles.

A small fraction of young children with autism have low levels of folate, a B vitamin, in their cerebrospinal fluid (CSF), according to unpublished research presented Tuesday at the 2011 Society for Neuroscience annual meeting in Washington, D.C.

No one knows the prevalence of cerebral folate deficiency in the general population, because analyzing CSF requires an invasive spinal tap. Children with the deficiency typically have severe and progressive neurological and motor problems, according to case reports1.

Researchers don’t yet know what to make of the new study, which reports about seven percent of children with autism as having this deficiency.

“It’s unclear at this point in time whether cerebral folate deficiency has an etiological relationship with autism, or if this could be a consequence of the very many different types of therapeutic approaches to autism,” says Aldeboran Rodriguez, a researcher in Susan Swedo‘s laboratory at the National Institute of Mental Health.

It’s also possible that the same level of folate deficiency exists in the non-autism population, but doesn’t cause major neurological problems and so never gets detected, the researchers say.

Folate is a B vitamin that is essential for a wide variety of processes in the body, including the synthesis of DNA, neurotransmitters such as serotonin and melatonin, and myelin, the fatty substance that covers neuronal connections.

When pregnant women don’t get enough folate, the neural tube of the fetus doesn’t form properly. A preliminary study suggests that women who take prenatal vitamins and folic acid, a related compound, during pregnancy lower their chances of having a child with autism.

In 2008, two studies of 25 and 7 children, respectively, reported a link between cerebral folate deficiency and autism.

In the new study, researchers analyzed folate in the CSF of 67 children aged 2 to 7 years who have autism, as determined by the Autism Diagnostic Interview-Revised, the Autism Diagnostic Observation Schedule and clinical observations. The children are all enrolled in a larger project, and were already getting spinal taps for medical reasons unrelated to the study.

A healthy level of cerebral folate is defined as 40 nanomoles per liter or higher. Folate levels in the new study’s participants ranged from 27 to 96. Five children had scores of less than 40, meeting criteria for folate deficiency.

The researchers found no differences in autism severity, diet, blood folate levels or seizures between children with and without folate deficiency.

“At this point in time, at least, the mechanism leading to the cerebral folate deficiency is unknown,” Rodriguez says.

Folate travels from the peripheral blood supply into the CSF by binding to receptors on the outside of the choroid plexus, the ventricle that holds CSF.

Folate deficiency in the CSF can be caused by low levels in the blood or by problems in this passageway. For instance, genetic glitches in the folate receptors could prevent it from getting from the blood to the CSF. Antibodies could also bind to the receptors and block folate transport, the researchers say.

The researchers plan to analyze children with autism for genetic variants in the folate receptor and for these antibodies.