Flow of water in the brain fingers autism 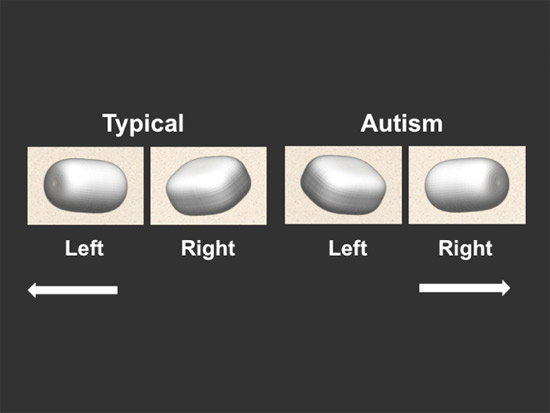 Mirror image: Brain scans of the left and right temporal lobe show one pattern in people with autism, and the opposite in controls.

An analysis of brain scans correctly distinguishes between people with autism and controls more than 90 percent of the time, according to a study published last week in Autism Research1.

This type of analysis is at least several years away from being used in the clinic, but the findings represent a solid step toward an objective test for autism, scientists say.

The study focuses on two brain regions implicated in autism: the superior temporal gyrus, which is involved in language, emotion and social behavior, and the temporal stem, one of the major conduits of information between the temporal lobe and other parts of the brain.

The researchers used a method called diffusion tensor imaging, or DTI, to explore the flow of water molecules through the brain. Applying several layers of analysis to this, they found that in one region, the water flow pattern in people with autism is a mirror image of the pattern in controls.

“About 90 percent of the time, just by looking at [these two areas,] you can tell who has autism,” says lead investigator Janet Lainhart, associate professor of psychiatry and pediatrics at the University of Utah. Because there are many brain regions involved in autism, the importance of just two regions “was very surprising to us,” she adds.

A few other groups are also exploring brain signatures for autism, and trying to develop predictive algorithms based on imaging patterns. In August, researchers at King’s College in London reported a combination of five anatomical markers in brain scans that could help identify autism2. But experts say those findings, like those of the current study, are too premature to constitute a diagnostic scan for autism.

The new study is an important step forward because, unlike other studies, it is looking at children and adolescents with autism, says Christine Ecker, lecturer in forensic and neurodevelopmental sciences at King’s College Institute of Psychiatry, and author of the August paper.

The researchers analyzed brain scans from 30 controls and 30 males with autism between the ages of 8 and 26. The technique they used, DTI, measures the movement of water molecules through the brain. Because water — a component of every body cell — generally flows along the length of nerve cells, DTI is a good method for assessing brain connectivity, and the health and maturity of nerve fibers. Previous studies have used other methods, including standard magnetic resonance imaging and magnetoencephalography.

“The DTI just seemed so much more sensitive in regard to probing what’s going on in the brain in autism,” Lainhart says.

The team used six different calculations to compare water flow in the participants’ brains. The crucial parameter, called ‘skewness,’ has never been applied in a study of autism before.

“In combination with five other measures that are typically studied, it boosted dramatically the ability of the scan to tell us whether the individual has autism or not,” says Lainhart’s collaborator Nicholas Lange, director of the Laboratory for Statistical Neuroimaging at Harvard’s McLean Hospital.

This means that old brain scans may contain more information than researchers have mined, Lange says. Using skewness and perhaps additional measures to analyze these scans could reveal patterns that are hallmarks of autism.

“In autism we found that the situation is entirely reversed,” Lange says, with water flow more organized on the right and less on the left. “They’re almost exact mirror images of each other.”

People with autism also have more movement of water in multiple directions in the temporal stem, compared with controls. The clinical implications of these differences aren’t yet clear.

An independent sample of 12 males with autism and 7 controls yielded the same results, making the team’s findings more robust.

The study’s results are good, but a diagnostic test has to perform even better, with close to 100 percent accuracy, says Martin Styner, assistant professor of computer science and psychiatry at the University of North Carolina at Chapel Hill.

“The [researchers] found something that’s very interesting,” Styner says, “but I would not say what they found is a diagnostic marker.”

Styner and Ecker both say the results need to be confirmed in a larger study, with a more diverse group of participants representing a clinical sample.

The researchers are already applying the DTI analysis to a larger group, including people with more severe autism, younger children and females. They expect their analysis to be complete within a year or two.