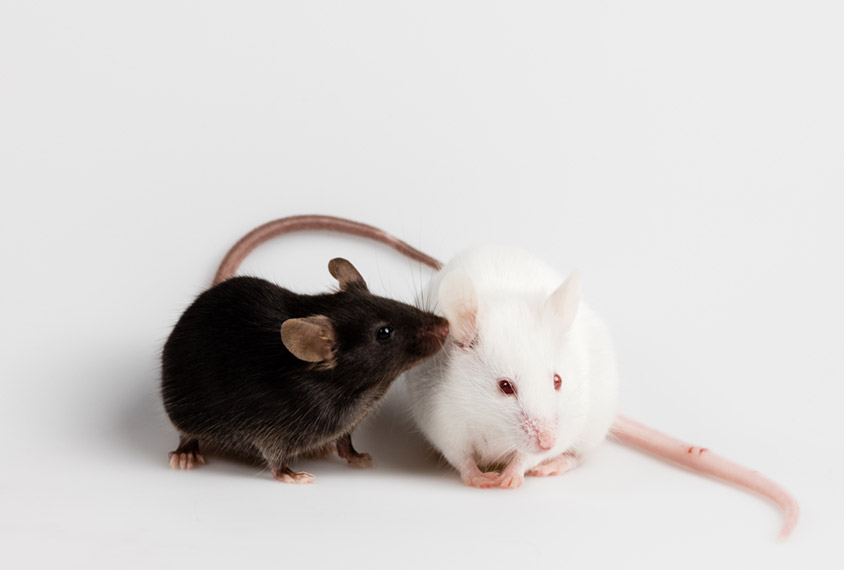 Social circuitry: Mice with an autism-linked mutation have better social memory after treatment that calms a related neural circuit.

Dampening overactive brain circuits alleviates social and spatial memory problems in a mouse model of 22q11.2 deletion syndrome, according to a new study1. The findings hint at the possibility of novel treatments for some difficulties associated with the syndrome.

Deletions of DNA in a chromosomal region known as 22q11.2 often cause intellectual disability or other cognitive difficulties, as well as psychiatric conditions such as schizophrenia. About 16 percent of people with the deletion also have autism2.

The type and severity of traits vary from person to person, in part because the deletion can span roughly 20 to 50 genes. That range makes it difficult to design targeted therapies. And many people with deletions in 22q11.2 are prone to drug-related side effects, such as seizures.

“Side effects with drug treatment is one of the hardest parts of dealing with mental illness,” says Julia Kahn, a postdoctoral researcher at the Children’s Hospital of Philadelphia in Pennsylvania, who worked on the study. “Being able to circumvent that in a very directed manner would be really life-changing for a lot of people.”

The study identifies the neural circuits responsible for select behaviors in model mice and shows that manipulating those circuits could offer a new treatment strategy.

“It suggests that therapies can be symptom specific,” says lead investigator Douglas Coulter, professor of pediatrics and neuroscience at the University of Pennsylvania in Philadelphia.

Coulter and his colleagues manipulated circuits in two regions of the hippocampus in 22q11.2 model mice: the ventral region, which governs social memory, and the dorsal region, involved in spatial memory. They focused on the hippocampus because it is important to social cognition in both mice and people, and previous studies have shown it is unusually small in people with 22q11.2 deletions3.

Before the manipulation, mice missing 22q11.2 perform worse than controls on tests of their social and spatial memory, the study shows. The mice do not distinguish between a new mouse and one they have already met, and they have trouble recognizing when an object in their cage has been moved. Brain imaging also showed that the model mice have overactive neurons in the hippocampus.

The team used a method known as ‘chemogenetics’ to dampen this overactivity. They gave the mice an injection that prompts some neurons in the hippocampus to produce ‘designer’ receptors. They then injected the animals with an experimental drug that binds only to those receptors, making the neurons less excitable.

Using the same technique, the researchers also gave control mice drug-sensitive receptors that either activate or quell the same circuits in the hippocampus. After both treatments, the controls showed the same social memory problems as the mice with 22q11.2 deletions. The results indicate that disrupting the circuits in either direction is enough to change behavior, even without any underlying genetic mutations. The findings were published in May in Biological Psychiatry.

Chemogenetics is a long way off from use in people, but drugs currently on the market may be able to achieve similar outcomes by nudging circuits into a more balanced state, says Peter Scambler, professor of molecular medicine at University College London in England, who was not involved in the work.

“It’s a proof of principle,” he says.

Manipulating circuits that govern specific behaviors “should be a goal of all current work at this point,” says Anthony LaMantia, professor of developmental disorders and genetics at Virginia Polytechnic Institute and State University in Blacksburg, who was not involved in the work. “This is much more targeted and precise. It should make everybody in the field think through how to design their experiments.”

Targeting circuits in the hippocampus could help people, because findings in the hippocampus in mice typically translate well to humans, says Rebecca Piskorowski, head of the synaptic plasticity and neuronal circuits team at the Institute of Psychiatry and Neuroscience of Paris in France, who was not involved in the work.

This kind of targeting might also help at any age. The method improved memory in adult mice, suggesting similar treatments could help older people with 22q11.2 deletions and not just children.

“This paper shows if you just adjust the activity in a tiny little place, you can somehow compensate for all those developmental problems,” Piskorowski says. “That is particularly exciting.”