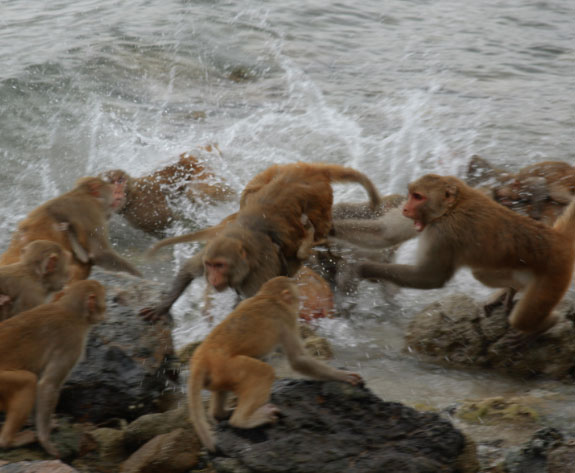 On an isolated island in the Caribbean, 4,000 rhesus macaques roam free, almost entirely undisturbed by people. This research colony of feral monkeys may be one way to study how genetics contributes to complex social behaviors in fragile X syndrome, according to unpublished research presented Monday at the 2012 Society for Neuroscience annual meeting in New Orleans.

“Mouse, fish and fly models of autism are great for genetics, but not so great to study behavior,” notes Heather Sherwin, a medical student in the laboratory of Michael Platt, director of the Duke Institute for Brain Sciences in Durham, North Carolina. “Human studies are great for behavior, but we don’t have complex inheritance pedigrees.”

To study the genetics of complex social behavior, the researchers are turning to these macaques, which live on the island of Cayo Santiago in Puerto Rico.

Researchers tag the monkeys once a year and collect DNA samples. They also follow individual monkeys for ten minutes at a time. Overall, they have about eight hours of observations for 108 monkeys and are continuing to accumulate more.

During the ten-minute sessions, the researchers document social and aggressive behaviors and activity levels. For example, they note whether the monkeys initiate or end a social or aggressive interaction, switch from one sexual partner to another, and whether that partner is of a higher rank.

They also measure the aggression ratio, which compares how much aggression a monkey initiates with how often it is attacked. This can be an indication of dominance, as a monkey with a high aggression ratio can attack other monkeys without being attacked in turn.

The researchers used a genetic linkage analysis and pedigrees to see whether any of these traits are inherited. They controlled for rank, social opportunity and social group, as these factors can influence how social or aggressive a monkey is.

A high aggression ratio and the tendency to switch sexual partners are both partially inherited characteristics, the study found. In contrast, other traits, such as initiating social contact, do not appear to have a strong inherited component and are mostly a function of the environment.

The researchers then looked for an association between these traits and 51 variants in genes that are linked to fragile X syndrome, including FMR1, HES1, GABRB3, NLGN4 and NLGN3. Fragile X syndrome is caused by the loss of the FMRP protein, which turns other genes on and off.

The researchers found a link between aggression and one variant in HES1, which turns many other genes on and off, and three in UNC13B-3, which functions at the junctions between neurons. They linked another variant in HES1, one in NLGN4 and two in TNF-alpha, an immune system gene, to sexual promiscuity.

The results are preliminary because of the small number of monkeys, but they suggest good behavioral measures for the inheritance of social traits in the animals, says Sherwin. They also suggest which of the numerous targets of FMRP may contribute to the social deficits seen in the disorder.