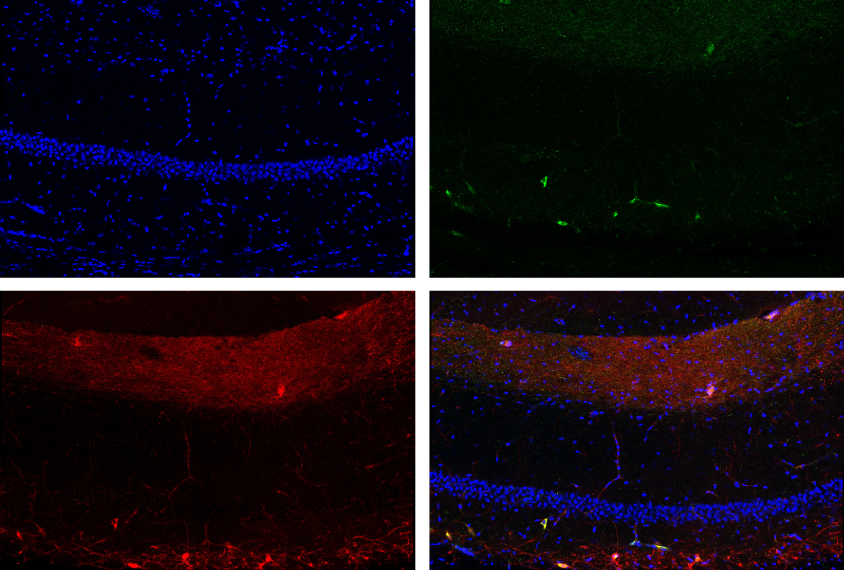 Memory circuit: Activating a type of inhibitory neuron (top right and bottom left) in the hippocampus of Rett mice enhances the animals’ ability to recall a fearful memory.

Deficits in specific inhibitory neurons in the hippocampus contribute to long-term memory problems in a mouse model of Rett syndrome, according to new research. Activating these inhibitory cells can improve the animals’ memory, the study also shows.

The findings reveal the neuronal circuits underlying some difficulties related to Rett syndrome, which is caused by mutations in the autism-linked gene MECP2. The condition predominantly affects girls and is characterized by motor problems, seizures, intellectual disability and, often, autism traits.

The study also provides additional evidence that an imbalance between inhibitory and excitatory signals in the brain contributes to memory difficulties in children with the condition.

Restoring memory in mice doesn’t mean that it will be possible to do the same in people, says co-lead investigator Matthew Caudill, assistant professor of neuroscience at the Baylor College of Medicine in Houston, Texas. “But it is a first step towards tracking down the circuits, and there’s hope that we can find similar circuits in humans.”

Previous research has focused mostly on the molecular function of MECP2, says Jacque Pak Kan Ip, assistant professor of biomedical sciences at the Chinese University of Hong Kong, who was not involved in the work. “No one tried to dissect the circuits involved in long-term memory in the context of Rett syndrome.”

Electrically stimulating a nerve bundle deep in the brain of female Rett mice — which lack MECP2 in about half of their cells — improved the animals’ memory, some members of the same team reported in 2015. The bundle connects to the hippocampus, a brain region needed to recall previous events and the context in which they occurred.

In the new study, the researchers monitored neurons in the hippocampus as the model mice recalled a fearful experience — a mild electrical shock to the foot — in order to identify the circuits involved.

Both Rett mice and controls froze in fear when put back into the same cage where they had been shocked twice, a sign that they had learned to associate the cage with the shocks and formed a short-term memory. When returned to the cage a day later, however, Rett mice froze for 57 percent less time than controls did, suggesting an impairment in long-term memory.

Compared with control mice, Rett mice also had a greater number of pyramidal neurons that were active at the same time during the long-term recall of the fearful memory, the team found via a small microscope implanted into the animals’ skulls.

“This [observation] suggests a lack of inhibition, because too many cells are active at one time,” Caudill says.

And in fact, OLM cells — a type of somatostatin neuron — that dampens the activity of other neurons — were under-activated in Rett mice, recordings from slices of the animals’ hippocampus revealed. OLM neurons lacking MECP2 received fewer excitatory signals from pyramidal cells than did OLM neurons containing MECP2, the researchers found.

OLM neurons are typically activated by and, in turn, inhibit hippocampal pyramidal neurons in a feedback loop, Caudill says. “In Rett mice, OLM cells that are missing the MECP2 gene are being poorly recruited by pyramidal neurons, so they’re not able to provide enough inhibition back onto the pyramidal cells.” The reduced inhibition may also be related to the development of seizures in children with Rett syndrome, he adds.

Activating somatostatin neurons in the hippocampus of Rett mice restored the animals’ memory to levels comparable to those of control mice, the researchers found. The findings were published 14 March in Neuron.

Showing that memory can be restored by activating somatostatin neurons is “very elegant,” says Michela Fagiolini, associate professor of neurology at Harvard University, who was not involved in the work. The study suggests that, after activating OLM neurons, even a fully developed brain that is already miswired can perform to the level of that of a control mouse, she says. “That is quite powerful.”

Future work should assess how much the findings can be generalized to other brain regions and whether the treatment may improve other Rett-related traits, Ip says.

Many children with Rett syndrome develop typically until 2 years of age and then suddenly lose the ability to speak or walk, Fagiolini adds. For this reason, it would be important to track the trajectory of inhibitory neurons in the hippocampus as the brain develops.

“Do OLM neurons lacking MECP2 never receive excitatory inputs?” she says. “Maybe the inputs are there at the beginning, and they become weak with time.”

The ultimate goal, Caudill says, “is to find another brain structure that would project onto [OLM] cells, so that we could activate them just by activating that other region.” Previous research suggests that such a region exists. Neurons in the medial septum, an area along the brain’s midline, project to OLM cells, and electrically stimulating the medial septum in rats can arrest a type of seizure common in children with Rett syndrome.

In the future, electrical stimulation of the medial septum may thus be a promising approach for alleviating memory problems and seizures in Rett syndrome, Caudill says. “Enhancing contextual memories may have pretty dramatic impacts on the phenotypes of Rett in humans.”