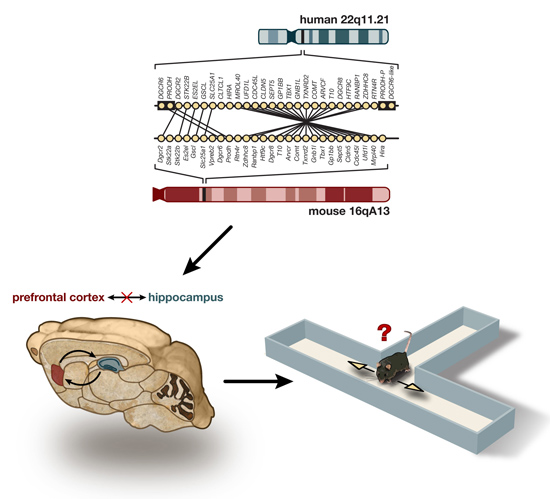 Communication breakdown: Mice that lack lack a segment of human chromosome 22, called 22q11.2, show much less synchrony between the prefrontal cortex and the hippocampus compared with controls.

Mice engineered to carry a well-known risk factor for schizophrenia show disruptions in the connections between two brain regions that coordinate memory and learning. And these disruptions directly cause problems with working memory — the ability to actively hold information and to recall that information to make a decision, according to a study published in Nature1.

Several studies have suggested that connectivity between the frontal lobe of the brain, where the prefrontal cortex is found, and the temporal lobe, where the hippocampus is located, may be altered in people with schizophrenia2,3,4. But those studies stopped short of elucidating whether this is a cause or symptom of schizophrenia.

“Our animal model study shows for the first time that dysconnectivity is not just an epiphenomenon, but is intimately related to the pathogenesis of schizophrenia,” says lead author Joseph Gogos, associate professor of physiology and neuroscience at Columbia University. “It also offers a model to develop ways to restore connectivity deficits.”

Scientists first reported in 1995 that people who lack a particular segment of human chromosome 22, called 22q11.2, are 30 times more likely to develop schizophrenia compared with the general population5.

Over the past decade, Gogos and his colleague, Maria Karayiorgou, have created mouse models to help understand how the deletion, which includes 27 genes, affects brain development and function6.

“This is a nice example of the future of basic neuroscience work, the goal of which is to understand the etiology and pathophysiology of major mental illness,” says Robert Malenka, professor of psychiatry and behavioral science at Stanford University, who was not involved with the study. The use of genetic mouse models can help elucidate the neural circuit malfunctions that underlie schizophrenia and similar diseases like autism, Malenka says. 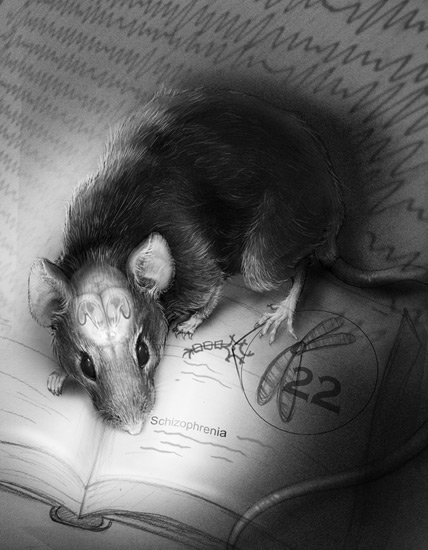 Studies in rats have shown that the activity of single neurons in the prefrontal cortex is precisely matched to the firing rhythm of hundreds of neurons in the hippocampus. Based on this synchrony, the researchers infer that the two regions are communicating with each other.

In the new study, published in April, Gogos and his colleagues tested this phenomenon in a mouse model with the entire 22q11.2 deletion by placing electrodes in the prefrontal cortex and hippocampus. The team simultaneously recorded neural activity in the two brain structures during each stage of a working memory task called the T-maze.

In this widely-used test, mice learn to navigate a T-shaped maze over a period of several days for a food reward, whose location varies between trials. The mice must rely on their working memory to remember which direction they took previously, and which direction might lead to the reward.

“We were interested to see right before the decision is made which way the mouse will turn, at what rate the neurons fire and how well synchronized they are,” says Karayiorgou, professor of psychiatry at Columbia University.

“[The lack of synchrony] seems to account greatly for the working memory cognitive disturbance,” says Karayiorgou. “This may underlie the higher susceptibility that these people have to schizophrenia.”

The strength of synchrony between the areas also predicts how long it takes the mice to learn the task. Animals with more synchronized activity learn the task faster than those with weaker synchrony.

“It’s strong evidence that the animals can’t do the task because they can’t synchronize those two areas,” says Joshua Gordon, assistant professor of psychiatry at Columbia University.

“One of the possible explanations for the inability of these two areas to talk with each other is that the wiring, the connections between the two areas, might actually be broken in the mouse,” says Gordon.

In a related study published in 2008, researchers analyzed neural activity in rats performing a T-maze task during the formation of habitual memory, used in humans for tasks such as driving a car7. The team studied how brain waves called ‘theta oscillations’ in the rat hippocampus communicate with gamma waves in the rat striatum — a region involved in forming habitual memory.

In this trial, the rat is instructed to turn left or right at the junction of the maze in response to a sound — akin to a traffic signal — that indicates which of the two arms contains a chocolate reward. Instead of having to recall which way they turned previously, which requires working memory, these rats must make a decision based on the direction of the sound.

Scientists have debated for years whether brain waves have any functional role in cognitive processes, notes Adriano Tort, lead investigator of that study and associate professor of neuroscience at the Federal University of Rio Grande do Norte in Brazil.

“Both of these studies suggest that this is the case,” Tort says. “It may well be that the brain uses multiple languages to convey different messages simultaneously.”

Studies that reveal the neural underpinnings of schizophrenia and related disorders such as autism suggest promising avenues for treatment, researchers say.

For example, understanding why the hippocampus and the prefrontal cortex do not communicate effectively might help scientists engineer drugs that repair the wiring.

Available therapies for schizophrenia primarily target imbalances in neurotransmitters such as dopamine and seratonin. Such neurochemical approaches, which “view the brain as a soup,” have dominated the thinking and hypotheses about the pathophysiology of major mental illnesses for decades, says Malenka.

For instance, too much dopamine was at one time believed to cause schizophrenia, whereas too little serotonin or norepinephrine were thought to cause depression, Malenka says. “These simple neurochemical models are just grossly inadequate.”

Drugs that target neurochemical imbalances are often effective at treating psychotic symptoms like hallucinations and delusions, but they don’t improve cognitive symptoms.

“If we can learn more specifically about what leads to cognitive dysfunction in patients with schizophrenia,” Gordon says, “then we could potentially develop novel treatments that really affect an aspect of the disease that current medicines do not.”