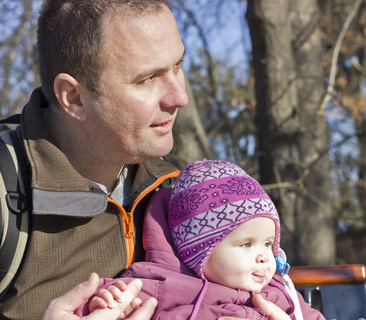 With every passing year, men are increasingly likely to transmit new mutations to their children, according to the largest study yet of the so-called paternal age effect, published yesterday in Nature1. The findings could help explain why older men are more likely to have a child with autism or schizophrenia than are younger men, the researchers say.

On average, a 20-year-old father passes down about 25 de novo mutations — which arise spontaneously in sperm cells — to his child, the study found. With each year of paternal age, the number of transmitted mutations increases by two. Mothers, in contrast, pass on about 14 de novo mutations through their eggs regardless of their age.

“When we looked at the variation in the de novo mutation rate, 97 percent of it is explained by age of the father,” says lead investigator Kári Stefánsson, chief executive of deCODE Genetics, a private company in Reykjavik, Iceland. “That, in and of itself, is striking.”

The new figures are the most direct estimate to date of the relationship between parental age and de novo mutations. The researchers calculated the figures based on whole-genome sequences from 78 trios of two parents and child. These familiescomprise a dataset that dwarfs those of previous studies, which relied on a handful of families2.

Several epidemiological studies in the past decade have shown that fathers older than 30 have an increased risk of having a child with autism or schizophrenia.

Four papers published in April suggested that de novo mutations in protein-coding genes occur more frequently in individuals with autism than in controls3, 4, 5, 6. These studies also showed an effect of paternal age on the number of damaging de novo mutations but did not look at whole genomes.

Researchers have long speculated that the two lines of research are linked. Women are born with all of the eggs they’ll ever use, but men continuously generate sperm from dividing precursor cells throughout life. Every cell division carries the possibility of introducing errors, or mutations, in the genome. The more mutations, the more likely that one will hit a gene that is involved in autism.

“[The study] is not for sure a slam dunk, but it’s a pretty good indicator of what the contribution is for advanced paternal age in autism,” says Evan Eichler, professor of genome sciences at the University of Washington in Seattle, who was not involved in the new work.

Eichler and others point out that the influence of paternal age ultimately hinges on what proportion of autism can be explained by de novo mutations. Estimates range from 5 to 20 percent, but even these cases are likely to be affected by other genetic, epigenetic and environmental factors.

In the new study, the deCODE researchers sequenced the genomes of the 78 trios. For five of the trios, they also had sequence data from at least one grandchild.

To identify the source of a given de novo mutation, the researchers looked at common inherited variants in the genome that are located near the mutation. Because of their proximity, variants serve as genomic markers, identifying the parental origin of the mutation.

Because most of the participants have a neurodevelopmental disorder, the researchers can’t be certain that the mutation rates reported are valid in the general population, notes Stephan Sanders, a postdoctoral fellow in Matthew State’s laboratory at the Yale Child Study Center.

“They cannot know that you can extrapolate this into non-autistic and non-schizophrenic individuals,” Sanders says, “but it seems likely that you probably can.”

Perhaps the most thought-provoking question the new study raises is whether increasing paternal age can partially explain the dramatic rise in autism prevalence over the past few decades.

Stefánsson’s team scanned demographic records in Iceland for the average paternal age starting in 1650. From 1900 to 1980, as the Icelandic population transitioned from agricultural to industrial living, the average paternal age dropped from 34.9 to 27.9 years. In the subsequent 30 years, however, thanks to better education and higher contraception use, the average age has gone back up, to 33 years in 2011.

Based on the rate of de novo mutation they calculated, the researchers estimate that individuals born in 1980 carry 59.7 mutations on average, whereas those born in 2011 carry 69.9.

Whether this increase contributes to the rise in autism prevalence is unclear, but the data are provocative, experts say.

“This doesn’t prove the case, but the data has implications for it,” says Aravinda Chakravarti, director of theCenter for Complex Disease Genomics at the Johns Hopkins University School of Medicine. “As paternal age goes up and down, this kind of demographic change is going to change the genetic features of the next generation.”

Still, many of the people with autism in the study had fathers in their 20s, Chakravarti notes. And conversely, some individuals carry many de novo mutations and don’t develop any disorders.

“There’s no data that suggests that a single de novo mutation, even in an older father, is necessary and sufficient to lead to autism,” Chakravarti says. “We need much more serious work before we’re going to sort this out.”