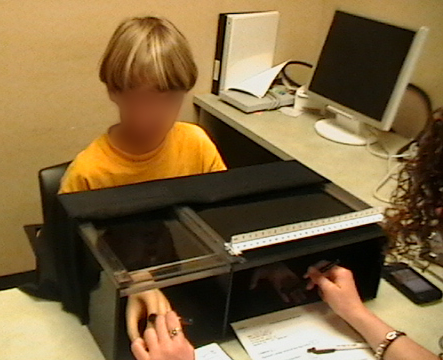 Funny feeling: A rubber hand starts to feel like a person’s real hand, but more slowly to children with autism than to controls.

Children with autism are less susceptible to an illusion involving sight and touch, according to unpublished research presented Monday at the Society for Neuroscience annual meeting in New Orleans.

Several studies have shown that people with autism are less susceptible to illusions  involving sight and sound. These findings are thought to reflect problems in integrating information from multiple senses.

“We know that multisensory integration is different in [individuals with autism], but it hadn’t been looked at in visual-tactile information before,” says Carissa Cascio, assistant professor of psychiatry at Vanderbilt University, who presented the work.

Cascio and her colleagues tested the ‘rubber hand illusion’ in 21 children with autism and 28 controls. The participants sat with their hands on a table in front of them, but with one hand hidden under a box. The researchers placed a rubber hand next to the box, then simultaneously brushed both the rubber hand and the hidden hand with a small paintbrush.

When controls undergo this procedure, “they experience the perception that what they’re seeing is causing what they’re feeling,” says Cascio. That is, they begin to feel as if the rubber hand were their own hand.

Children — particularly those with autism — might have trouble describing this experience. So to assess the experiment objectively, the researchers asked the children to close their eyes and point to a spot on a ruler atop the box corresponding to where they thought their hidden hand was.

The controls say they their hidden hand is closer to the rubber hand after the brushing than they do at the start of the experiment, suggesting that their minds are fusing the real hand and the rubber hand into a single entity.

Among children with autism, this ‘drift’ towards the rubber hand doesn’t occur as rapidly, the researchers found.

However, if the experimenter brushes the rubber hand and the hidden hand half a second apart, children with autism are more likely to experience the illusion than are controls.

Another study presented Monday suggests an explanation for this curious result.

The interval over which people perceive asynchronous sounds as happening simultaneously is longer for people with autism than it is for controls, the researchers found. In scientific terms, those with autism have a wider temporal binding window.

Cascio suggests that this may also apply to their perception of sight and touch. “It could be that [half a second] wasn’t long enough for those asynchronous inputs to be perceived as asynchronous,” she says.

“Social cognition involves the ability to map one’s own body [perceptions] to an external location,” Cascio says — that is, the ability to put oneself in another’s place. In fact, the researchers found that children with greater impairments in empathy are also less susceptible to the rubber hand illusion than others.

Integration of sight and touch may be just as important early in life as the more frequently studied pairing of sight and sound, Cascio says. “Touch is a sensory system that before we learn to talk is very critical to our communication and social interactions,” she says.