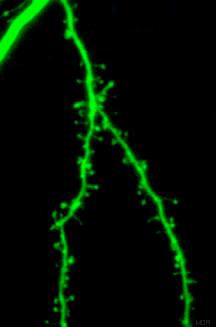 The SHANK family of proteins, some of which are strong autism candidates, work together to facilitate brain signaling, according to unpublished results presented yesterday at the 2014 Society for Neuroscience annual meeting in Washington, D.C.

The proteins also seem to compensate for each other: Researchers must delete at least two of them to trigger signaling defects in the hippocampus.

One family member, called SHANK3, is a top autism candidate, but two other members, SHANK2 and SHANK1, are also linked to autism. SHANK3 is also implicated in Phelan-McDermid syndrome, a disorder characterized by motor deficits, intellectual disability and, often, autism.

The predominant family member in the striatum, a brain region that coordinates movement, is SHANK3. Mice lacking SHANK3 are known to have deficits in signaling in this region.

By contrast, SHANK3 may take a back seat to the others in the hippocampus, a brain region that regulates learning and memory.

The researchers injected 7-day-old rats with pieces of RNA that block expression of SHANK1, SHANK2 or SHANK3. Because the RNA is attached to a fluorescent molecule, they could distinguish neurons with and without this molecule. They then injected three electrodes into the rats’ brains, stimulating both sets of neurons through a third, projecting neuron and simultaneously measuring their response.

They found that hippocampal neurons lacking SHANK2 or SHANK1 have fewer synapses, or neuronal junctions, leading to sluggish brain signals. This effect is stronger when the neurons lack both proteins. The researchers didn’t see an effect when they blocked SHANK3 alone.

At first glance, the SHANK3 findings seemed to be at odds with results from mouse models. “In the beginning I was a little worried,” says Weifeng Xu, assistant professor of neuroscience at the Massachusetts Institute of Technology, who presented the results. But on scrutinizing the literature, she found that mice lacking SHANK3 show defects in the hippocampus only after 6 weeks of age.

The team has some evidence that SHANK3 levels in the hippocampus rise above those of the other SHANKs as the rats age. This may explain why some symptoms in Phelan-McDermid syndrome, such as problems with learning, worsen with age, says Xu. Motor deficits, in contrast, begin at a young age.

In another poster presented yesterday, Harold MacGillavry, a postodoctoral associate in Tom Blanpied‘s laboratory at Utrecht University in the Netherlands, showed the effects of deleting all three SHANK proteins at once in cultured hippocampal rat neurons.

The mutant neurons have fewer dendritic spines — mushroom-like protrusions that receive signals from other neurons — than controls do. The spines also have low levels of actin, a molecule that makes up the cell’s structural skeleton. Real-time imaging shows that the spines have a particularly bulbous head and are less dynamic than control spines.

The results suggest that SHANK3 helps tether components of the cell’s skeleton to the edges of dendritic spines, perhaps helping them shift in anticipation of incoming chemical messages, says MacGillavry.