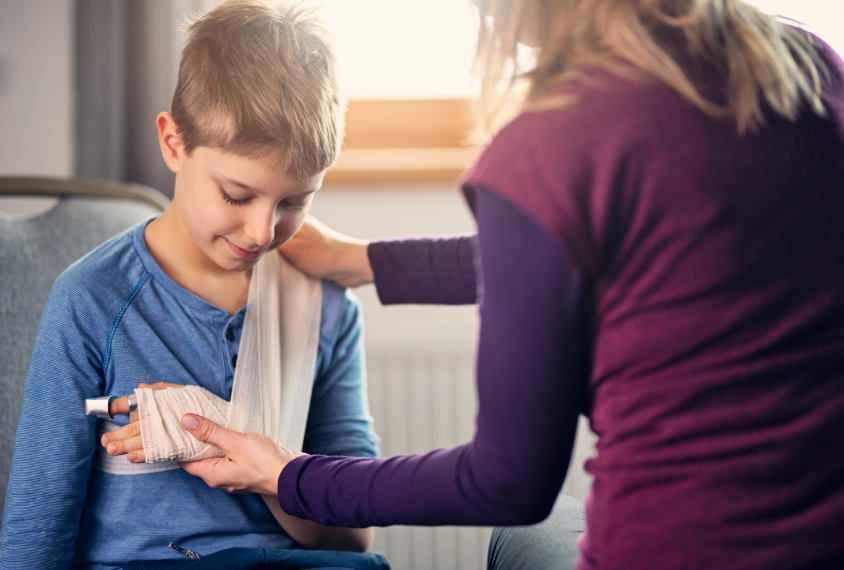 Too tough: Most children with mutations in a gene called SYNGAP1 are unusually tolerant of pain.

In a home video, 9-year-old Beckett giggles with delight as his family’s puppy, Coco, nips at his fingers. The dog chomps down again and again, eventually drawing blood, but Beckett does not stop smiling. Monica Weldon, Beckett’s mother, can be heard from behind the camera, crying out in disbelief, “How is that funny? That hurts!”

Beckett, now 11, has been unusually tolerant of pain for most of his life. He never cried after accidental burns or falls, his mother says. When he was 4, he broke his pinky finger while playing catch with his twin sister, Pyper, and his parents didn’t even realize he was hurt until his finger turned blue — four days later.

That same year, doctors discovered by coincidence that Beckett has a mutation in a gene called SYNGAP1, which is crucial for neurons to communicate. This was in 2012, and mutations in the gene had only just been linked to autism, intellectual disability and epilepsy — all of which Beckett has. Today, SYNGAP1 is near the top of the list of genes associated with these conditions.

Over the past five years, several studies have contributed to a better understanding of traits linked to mutations in the gene, along with promising leads for treatments. Some of this research has been driven by families with the mutations, who have raised funding and helped scientists recruit participants for their studies.

Bridge the Gap, a group Weldon founded, created a registry in 2016 that has enrolled more than 200 such people. Another family-run group, called the SynGAP Research Fund, has awarded more than $700,000 for research in the past year.

Family groups such as these “are playing a leading role in the history of that gene,” says Stephan Sanders, assistant professor of psychiatry at the University of California, San Francisco.

Some studies published in the past few months confirm what parents like Weldon have long suspected: Pain insensitivity like Beckett’s is one effect of mutations in the gene. This finding comes from a January study of 57 people with a mutation in the gene — the largest study of its type1.

The researchers also found that nearly everyone with a mutation has intellectual disability, developmental delay and seizures, and more than half have autism; most are also picky eaters and have a high pain threshold, as well as behavioral problems, sleep difficulties, low muscle tone and an unsteady gait.

A second study, published in December, revealed why these individuals may tolerate pain: The mutations tamp down the activity of neurons that process touch2.

Researchers first found a harmful SYNGAP1 mutation in 2009, in three people with intellectual disability, and in someone with autism two years after that3,4. In 2014, an analysis of thousands of sequences linked the gene to autism with 99 percent certainty.

Its ties to autism have only grown stronger since. A 2015 analysis of sequences from more than 20,000 people ranked the gene fifth on a list of ‘high-confidence’ autism genes. Unpublished results presented at a conference last year bumped it up to third.

“There’s really no doubt about its link to autism,” says Sanders, who led the 2015 study and the unpublished work.

SYNGAP1 encodes a protein of the same name that is highly expressed in the brain. The protein is found at neuronal junctions, or synapses, that use a chemical messenger called glutamate to excite neuronal activity5,6. And it is known to interact with other synapse proteins, such as SHANK3, that are also implicated in autism.

The SYNGAP1 protein is crucial for synaptic plasticity — the ability of synapses to change in strength in response to experience. It does this by dampening the activity of the RAS pathway, a molecular pathway implicated in autism that controls the number of glutamate receptors.

Mice missing a copy of the SYNGAP1 gene show hyperactivation of the RAS pathway. The mice have learning and memory problems, social deficits, repetitive behaviors and seizures7.

“It turns out [these mice] are a pretty good model for the kids with SYNGAP1 mutations,” says Rick Huganir, director of neuroscience at Johns Hopkins University in Baltimore, Maryland.

Several teams are using the mutant mice to test treatments for people with the mutations. One of these treatments, the cholesterol drug lovastatin, which counteracts hyperactive RAS, seemed to ease repetitive behaviors and improve social communication in a man with a mutation in the gene, according to a case report published in May8. (Lovastatin is also being tested for fragile X syndrome, a condition related to autism.)

A study published in April found that restoring SYNGAP1 expression can alleviate memory problems and seizures in adult mutant mice9. Researchers are exploring strategies to reinstate the protein’s expression in people.

For instance, Huganir and his colleagues are investigating a drug made up of small pieces of RNA called antisense molecules that increase production of the SYNGAP1 protein. (A similar antisense drug is approved for children with spinal muscular atrophy.) The same team is also working on a gene therapy approach, using a virus to deliver a working copy of the gene to neurons that lack a copy. And Rumbaugh’s group is screening thousands of small molecules to find ones that boost the gene’s expression.

Before these treatments can be tested in people, however, researchers must better understand — and be able to measure — traits associated with the mutations, says Constance Smith-Hicks, child neurologist and research scientist at the Kennedy Krieger Institute in Baltimore, Maryland. That way, she says, “when the time comes for us to consider clinical trials, we’ll have tools to monitor disease progression, changes and drug response.”

Smith-Hicks and her colleagues are using questionnaires to measure sensory sensitivities, sleep problems and cognitive difficulties in people with the mutations. Another team is assessing their gait.

“I often see that [children with the mutations] have an unsteady gait, but this has not been investigated in a rigorous, detailed way,” says lead investigator Jimmy Lloyd Holder Jr., assistant professor of pediatrics, neurology and developmental neuroscience at Baylor College of Medicine in Houston, Texas.

At the first-ever meeting for SYNGAP1 families in the United Kingdom, held 22 June in Edinburgh, a team of researchers invited attendees to participate in an evaluation that includes a physical exam, tests of cognitive function and questionnaires to measure autism traits. The researchers hope to use some of these measures to assess the efficacy of lovastatin in a clinical trial, says lead investigator Andy Stanfield, senior clinical research fellow at the University of Edinburgh’s Centre for Clinical Brain Sciences in Scotland.

Interactions between scientists and families at meetings such as this are a critical driver of research, Huganir says. “It has really got my lab extremely motivated.”

Rumbaugh says he first learned about the unusual pain tolerance in people with the mutations by speaking with families at a similar meeting in the United States in 2016, motivating him to study it further.

Researchers also can apply to access data in the registries. After Monica Weldon presented Bridge the Gap’s registry at a meeting in May, a researcher told her that she had accomplished in 5 years what some people have been trying to do for 50, Weldon recalls. She replied: “I hope what we’re doing is working, because we don’t have 50 years.”