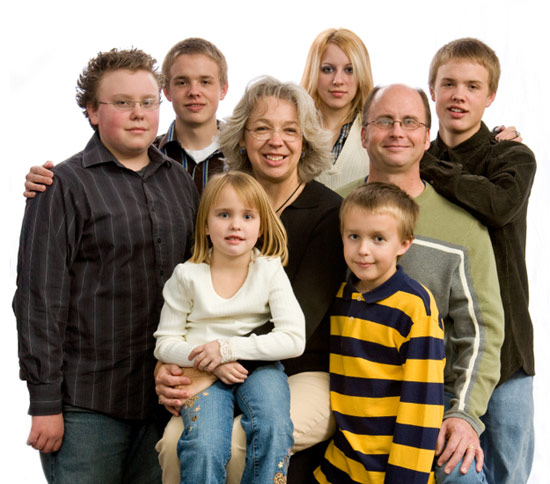 Family ties: Even when carried by members of the same family, the 16p variant can lead to an array of different conditions ranging from autism to obesity.

Two new studies of families carrying glitches on a region of chromosome 16, which has been strongly associated with autism, reveal the wide range of effects caused by the variant and narrow the list of possible culprit genes.

In 2008, scientists reported that the chromosomal region 16p11.2 is deleted or duplicated in about one percent of individuals with autism.

A family study published on 11 January, and first reported at the 2009 World Congress of Psychiatric Genetics in San Diego, suggests that disrupting only a small piece of that region can sometimes cause autism. The researchers describe a three-generation Belgian family in which six members — four with autism or autistic traits — are missing a piece of 16p11.2 that spans only five genes1.

Another study, published in December, reports a Chinese family in which full 16p deletions sometimes cause autism and mental retardation, but at other times lead to relatively mild language delay2.

“The features that are present in these families might have real importance to understanding what it is that this interval is doing and how it’s actually doing it,” notes Brett Abrahams, assistant professor of genetics and neuroscience at Albert Einstein College of Medicine in New York, who was not involved in the new work.

For example, the wide range of traits associated with 16p11.2 may indicate that there are multiple regions of the genome affected simultaneously. “It’s likely that genes elsewhere in the genome might be involved in modulating the effects of 16p11.2 event, and that those interactions are really important,” Abrahams says.

Although the 16p segment is one of the strongest genetic risk factors for autism, the association is complicated. It spans nearly 30 genes, none of which are strong candidates for autism.

Duplications of the region are strongly linked to schizophrenia. Some individuals who carry 16p11.2 glitches have facial deformities or obesity, while others have no noticeable problems.

Researchers discovered the Belgian family when screening 363 children with autism for variations in SEZ6L2, which is located inside the 600-kilobase 16p11.2 region. The team, led by Hilde Peeters and Koenraad Devriendt from University Hospital Leuven in Belgium, found one boy who is missing only a 118-kilobase segment of the region, and delved into the genomes of seven of his relatives.

The family, it turned out, shows an intriguing inheritance pattern for this microdeletion. The boy’s sister, maternal aunt and maternal grandmother all carry the deletion and have autism. His mother and maternal uncle carry it and do not have autism, although his uncle has problems with impulse control and emotion regulation. The boy’s brother has autism and his father has some traits of the disorder, but neither carries the deletion.

“The findings in the present family underscore the presence of strong phenotypic heterogeneity of 16p11.2 deletions, since only four out of six carriers had [autism spectrum disorder] or broader traits, and the severity was very variable,” notes An Crepel, who was a graduate student in Peeters and Devriendt’s lab, and is first author of the study.

The microdeletion encompasses five genes — ASPHD1, CDIPT1, KCTD13, MVP and SEZ6L2 — all of which are expressed in the brain. After analyzing the genes’ potential biological significance with a ranking algorithm called Endeavour, the researchers found that two — MVP and SEZ6L2 — are particularly promising candidates for autism.

Rare variants in SEZ6L2 cropped up in a 2009 study of individuals with autism, but did not show up in a replication sample3. MVP, which encodes the major vault protein, interacts in neurons with PTEN, a protein that is involved in cancer and some cases of autism4.

“Thirty genes is really unwieldy for most kinds of functional studies, so the prospect of having five or even two genes to look at in gory detail is very exciting,” Abrahams says. “This paper really leapfrogs ahead of much work that might have been needed.”

Still, researchers know little about why variations in these genes sometimes lead to autism and other times do not. To understand more about the genetic and environmental factors at play, they’re probing the characteristics of families that pass on the 16p deletion.

After the first 16p findings came out, Bai-Lin Wu‘s team at Children’s Hospital Boston began a collaboration with the Capital Institute of Pediatrics in Beijing to screen children with autism for variations in the region.

So far they have analyzed about 200 children, 2 of whom carry the 16p11.2 deletion, according to Wu. Last month, the researchers published a full description of one of these boys and his extended family5.

The boy’s father and younger brother also carry the 16p11.2 deletion. All three have broad nasal bridges and large jaws. The boy has severe autism, mental retardation, short stature and a curved spine. His father has mild autism traits — communicating rarely, even with his wife — is overweight and an alcoholic. The boy’s younger brother did not speak until he was 4, but does not have autism.

What could account for this wide spectrum of characteristics, even within the same family? Because the brothers were raised in the same living environment, it’s probably not an environmental factor, says Wu, director of the Genetics Diagnostic Lab at Children’s. “What’s more likely is [that there are] genetic differences between the two brothers.”

For instance, Wu found that although the brothers both carry the same 16p11.2 deletion from their father, they inherited different 16p11.2 regions from their mother, who is healthy. “In the younger brother, that could be a protective factor,” Wu says. “But at the moment, that is just speculation.” Another possibility is that variations in other chromosomes are interacting with the glitch on 16p.

Wu’s team is doing a fine-grained sequencing of genes — both within and outside of 16p — in this family. In a similar vein, the Simons Variation in Individuals Project (run by sfari.org’s parent organization) aims to collect gene sequencing, behavioral and brain imaging data from at least 200 families carrying 16p11.2 variants. The project enrolled its first participant earlier this month.

“These papers that have come out with family descriptions have given us inklings and hints as to what questions we want to ask in much bigger and more complex studies,” says Ellen Hanson, director of the Neurodevelopmental Disorders Phenotyping Program at Children’s Hospital Boston and one of the leaders of the project. For instance, based on earlier reports, the project will look specifically for signs of obesity and dysmorphic features in participants. “They really paved the way,” she says.