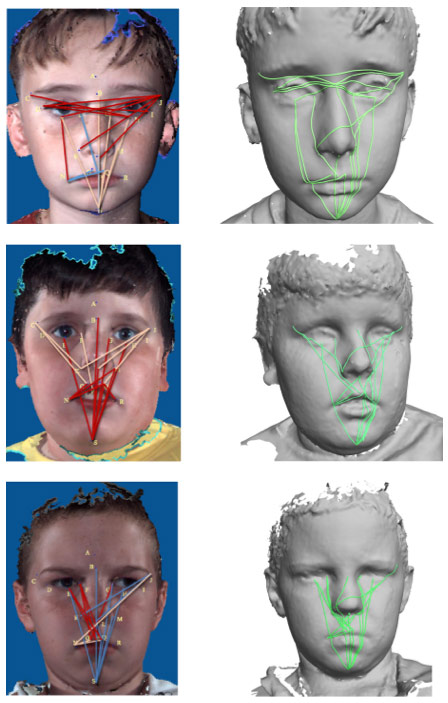 Genetic disorders are often written in the face. People with Down syndrome, caused by an extra copy of chromosome 21, tend to have flattened noses, eyes that slant upward and small ears. People with the rare Marfan syndrome often have long, thin faces with deep-set eyes and small lower jaws.

Even some children with autism — a heterogeneous disorder with myriad susceptibility genes — have unusual facial features, or dysmorphology. In fact, in his original description of autism in 1943, Leo Kanner noted that some boys with the disorder have distinctive, “beautiful” faces.

These subtle features may hold clues about the origins of autism. But quantifying them using traditional tools, such as tape measures and calipers, is both labor-intensive and error-prone — particularly when studying children. Many scientists are uncomfortable with or downright skeptical of the practice, given its similarity to the notorious pseudoscience of phrenology, which attempts to predict a person’s character from the shape of his or her skull.

Now a group of dysmorphologists, armed with faster, more accurate and less invasive measurement systems, is reviving this once-tedious trade. In a study published 29 October in the Journal of Autism and Developmental Disorders, they identified three distinct patterns of facial structures among 62 boys with autism1. One of these patterns tracks with low intelligence and language impairment.

“The face and the brain actually develop in very close association,” says Kristina Aldridge, assistant professor of pathology and anatomical sciences at the University of Missouri, who teamed up with veteran dysmorphologist Judith Miles for the study.

“We clearly know there is something different about the development of the brain in these kids,” Aldridge says. “Our hypothesis is that because of the changes that are happening early with the brain, it’s affecting the face at the same time.”

Miles, professor emerita of child health and genetics at the University of Missouri, became interested in facial dysmorphology more than a decade ago while working as a clinical geneticist. She took pictures of hundreds of children that came to her clinic. And as her photo collection grew, she realized that she could often pick out the children with autism just by looking at their faces.

In 2008, she showed her photo collection to Aldridge and asked her to try.

“I was a little uncomfortable with the idea,” Aldridge says. But to her surprise, she too was able to identify the children with autism.

The subtle differences were hard to pinpoint. So in 2011, Miles and Aldridge captured three-dimensional (3D) pictures of 64 boys with autism and 40 controls between the ages of 8 and 12, and used imaging software to look for the patterns2. They found that, compared with controls, boys with autism tend to have more wide-set eyes, broader faces and mouths, and flatter noses.

What’s more, the boys with autism who have the most distinctive facial profiles cluster in two groups based on their facial features. The boys in one group turned out to have more severe symptoms, including language impairment and intellectual disability, whereas those in the other group have milder manifestations.

In the new study, Miles and Aldridge tweaked their technique. Instead of using straight lines to measure the distances between pairs of facial landmarks, such as one corner of the mouth and the center of the brow, they used curved lines that follow the contours of the face.

This time, they identified three subgroups among the boys with autism. Those with the most pronounced facial differences relative to controls tend to have the most severe autism symptoms and the greatest level of cognitive impairment. More than half of these boys, or 57 percent, lost language skills before the age of 3.

The team plans to analyze the genomes of the boys in each cluster to see whether they share any genetic irregularities. “I’d be interested in seeing whether that would let you narrow down the huge number of autism genes to a smaller number,” Miles says.

Curtis Deutsch, associate professor of psychiatry at the University of Massachusetts in Worcester and another seasoned dysmorphologist, is also taking advantage of new technology. His team has used 3D imaging software to analyze the faces of 144 people with autism from the Simons Simplex Collection. (This project is funded by the Simons Foundation, SFARI.org’s parent organization.)

Deutsch and his colleagues have identified four subgroups based on facial features. Now they’re looking for autism-linked DNA deletions or duplications, called copy number variations, within these subgroups.

“If you were to have a combination [of facial features] that related to a particular copy number variant, or better yet, a gene, then it would give you a way to draw a line between the etiologic factor and mechanism,” Deutsch says. “So it can potentially tell us something about the underlying biology.”

Dysmorphologists are the first to admit that their techniques are imperfect, and certainly not diagnostic. Rather, they say faces are but one more window into autism’s molecular origins.

“Decades of gene sequencing and analysis hasn’t solved this problem alone,” Aldridge says. “It’s going to be the combination of studies like these with gene sequencing and with evaluation of environmental factors and family background factors that are going to ultimately determine what’s going on in autism.”

Still, many researchers remain skeptical that facial features will point to autism-linked genes. Evan Eichler, professor of genome sciences at the University of Washington in Seattle, is using the opposite approach: starting with genes and then looking for common facial features.

“I think the most agnostic and least biased way to group patients is genetically,” says Eichler, who in July published a study that found people with mutations in the autism-linked gene CHD8 tend to have wide-set eyes, broad foreheads and large heads, or macrocephaly.

Based on this finding, Eichler and his team analyzed CHD8’s sequence in 156 people with autism, some of whom have macrocephaly, and identified an individual with a CHD8 mutation — a genetic rarity known to exist in fewer than 30 people worldwide. “That told us that this approach would make sense,” Eichler says.

A separate study, published in September, found that people with mutations in another autism candidate gene, ADNP, often have high hairlines, protruding foreheads and thin upper lips. Other researchers are currently focusing on individuals with mutations in the autism-linked gene PTEN, which frequently result in macrocephaly.

Christian Schaaf, assistant professor of molecular and human genetics at Baylor College of Medicine in Houston, Texas, who identifies as both a geneticist and a dysmorphologist, sees advantages to both approaches.

“I do think there could be value in combining genomic technology along with this kind of dysmorphology technology to see if there are clusters and genes and pathways that cause certain facial features,” Schaaf says. This could help guide the search for autism-linked mutations and help researchers understand autism’s heterogeneity, Schaaf says. “Ultimately, autism is a developmental disorder that’s defined not by dysmorphic features, but by clinical and behavioral features.”