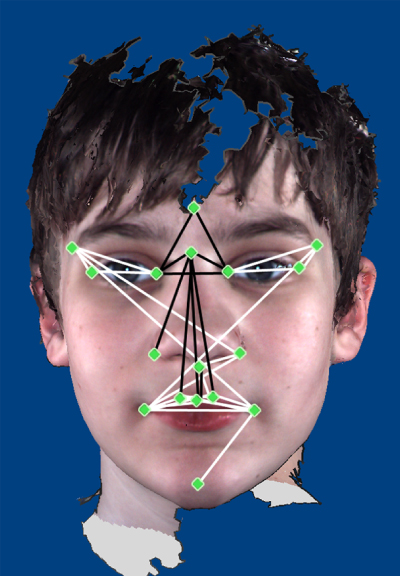 Face map: Boys with autism have broader faces and mouths, flatter noses and narrower cheeks than controls do.

Boys with autism have a distinct facial structure that differs from that of typically developing controls, according to a study published 14 October in Molecular Autism1. Specifically, boys with autism have broader faces and mouths, flatter noses, narrower cheeks and a shorter philtrum — the cleft between the lips and nose — compared with controls, according to the three-dimensional facial imaging system used in the study. These distinctive features suggest that certain embryonic processes that give rise to facial features are perturbed during development, the researchers say.

The participants in the study were all 8 to 12 years old, an age range during which the face is relatively mature, but not yet affected by the hormonal changes of puberty.

The researchers used the imaging system, dubbed 3DMD, to plot 17 ‘landmarks’ or coordinates on the face of 64 boys with autism and 40 typical controls. They then measured the distance between several of these coordinates.

Boys with autism who have the most distinctive facial features cluster into two groups with very different sets of autism symptoms, the researchers found.

Boys in one group tend to have wide mouths, combined with a short distance between the top of the mouth and the bottom of the eyes. They also show severe symptoms of autism, including language impairment, intellectual disability and seizures.

By contrast, those in the second group have broad upper faces and a short philtrum. They are more likely to be diagnosed with Asperger syndrome, and to have fewer cognitive impairments and language difficulties compared with the first group.

“As a clinical geneticist, I have always been impressed by a certain facial phenotype in children with autism,” says lead investigator Judith Miles. But it wasn’t until she turned to 3DMD, developed for use by plastic surgeons, that clear quantitative differences emerged between boys with autism and controls, she says.

Those differences almost certainly reflect underlying neurodevelopmental processes, she says. “The reason to look at the face is that it reflects differences in the brain.”

Studies have found that children with autism are more likely than controls to have dysmorphology, or unusual physical features, of the head and skull.

Earlier this month, researchers at the University of South Alabama reported that among children referred for genetic testing for suspected autism, those who have a copy number variation (CNV), a deletion or duplication of a genetic region, are more likely to have unusual facial features than those who carry no CNVs2.

“There is remarkable etiologic heterogeneity in autism, and the use of dysmorphology phenotyping may help us come to grips with some of this complexity,” says Curtis Deutsch, associate professor of psychiatry at the University of Massachusetts Medical School, who was not involved with either new study.

Studies of facial dysmorphology in autism have generally relied on observation or tools such as calipers to pinpoint specific facial features.

3DMD instead uses multiple digital cameras to capture a 360-degree image of the head. Algorithms integrate the images to produce a single 3D image that is analyzed using special software.

This generates results that are more fine-grained than manual measurements, says Kristina Aldridge, assistant professor of pathology and anatomical sciences at the University of Missouri.

“We’re not talking about kids you would pick out on the street as looking different. These are subtle differences that are systematic, [in the range of] 2 to 5 millimeters,” Aldridge says. “It is extraordinarily precise.” She has used 3DMD to assess facial dysmorphology in children with birth defects3.

Deutsch has used the same technology in his own research. Still, he cautions that the sample size in the study may not be large enough to generate reliable results.

“It is also important to guard against performing a multitude of statistical tests without appropriate corrections,” he adds. “Otherwise differences that are reported as significant can result from chance alone.”

This sort of analysis can produce results that are difficult to interpret, Miles says. “It will always give you something, but we had to look at whether clinical differences correlated with the subgroups identified by the cluster analysis.”

Using autism diagnostic characteristics, intelligence quotients (IQ), medical symptoms and other measures, she says, “what we found is that those two subgroups really do appear to be discrete clinically.”

The findings resonate with researchers who have studied dysmorphology in autism using less sophisticated measures than 3DMD.

For example, a team at Baylor College of Medicine in Houston, Texas, reported at the 2011 International Meeting for Autism Research in San Diego that severe autism symptoms predict the presence of dysmorphic features — albeit those not discernible to the naked eye. “The vast majority of cases [in that study] show very subtle facial differences,” says Robin Kochel, assistant professor of psychology at the Baylor College of Medicine.

The results of the new study jibe with what she sees everyday in the Autism Center at Texas Children’s Hospital, Kochel says. “Those who have more dysmorphology tend to have more problems and be more severely affected.”