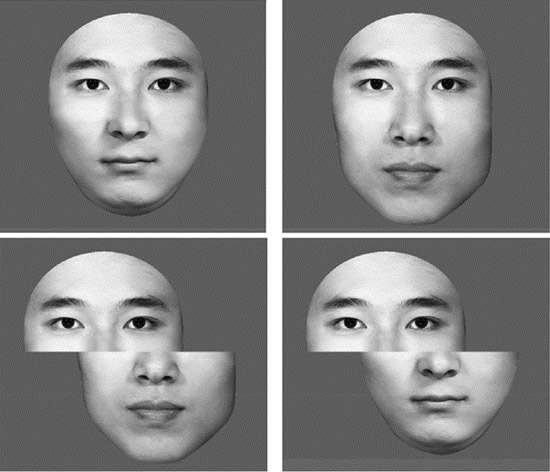 About face: Identical twins score more similarly on standard tests of facial recognition &mdash; such as determining whether a face is misaligned &mdash; than do fraternal twins.

The ability to recognize faces and interpret facial expressions is programmed partly by genes and inherited separately from other traits, according to three independent studies published this year.

The findings suggest that the ability to recognize faces is separate from general intelligence1 and, along with the ability to interpret emotional expressions, may be hardwired into genes2. They might also help explain why an individual with autism retains some cognitive skills — such as reading maps or solving puzzles — and loses others, and why individuals with autism can have remarkably different behaviors.

“If cognitive skills like face recognition are inherited separately, our study results may very indirectly explain why there is such a wide spectrum of symptoms and severity in autism,” says Nancy Kanwisher, professor of cognitive neuroscience at Massachusetts Institute of Technology and lead investigator of one of the new studies.

The results may also spur a broader investigation of whether other cognitive abilities — such as spatial navigation and language — are independently heritable, researchers say.

In the most recent study, published online 21 February in Proceedings of the National Academy of Sciences3, researchers assessed how well identical and fraternal same-sex adult twins score on the Cambridge Face Memory Test. This test measures an individual’s ability to learn faces and then recognize them at different angles and in different lightings.

Identical twins — who share 100 percent of their genes — are more than twice as similar to each other in their ability to recognize faces than are fraternal twins, who share about half their genes, the researchers found. This suggests that there is a strong genetic component to face recognition.

To confirm that the results are specific to face recognition and not a more general aspect of memory, the researchers compared the ability to recognize faces with that of remembering word-pairings and images of abstract art.

Twin and non-twin participants memorized 25 word pairs and 50 abstract art images and were then tested on their ability to recall them. For all participants, the researchers found that an individual’s scores on face recognition and word or art recognition do not correlate, suggesting that face recognition is genetically independent from these other cognitive abilities.

Kanwisher’s team reported similar results in children in the 26 January issue of Current Biology. She and her collaborators in China gave three classic tests of face recognition to 51 pairs of identical twins and 35 pairs of fraternal twins, all healthy and aged 7 to 19.

In the first task, participants saw black-and-white images on a computer screen for one second each, and were asked whether each picture was a face or a house. In the other two tests, participants determined whether a face was upright or upside-down, and whether it was one complete face or a mash-up of the top of one face and the bottom of another.

In all three tests, the researchers found that identical twins have more similar accuracy scores than do fraternal twins4.

By comparing the performance of the identical and fraternal twins, the researchers calculated precisely how much influence genes have in determining an individual’s accuracy score.

They found that genes account for 25 to 39 percent of the variation in face recognition ability between identical and fraternal twins; the remainder is a result of either environmental influences or errors in measurement.

For instance, extroverts may be better at recognizing faces than introverts because extroverts see more faces in their daily life, says investigator Jia Liu, a professor of cognitive neuroscience at Beijing Normal University in China.

There were no differences between the range of scores in identical twins and fraternal twins in other cognitive abilities, such as sharpness of vision, object recognition and memory.

“Our data show at least one cognitive ability — face recognition ability — is independently heritable,” says Liu. “We don’t know whether the 25 to 39 percent is low or high, but from our statistical estimates, it seems reasonably high.”

Genes might also predict specific patterns of brain activity during face processing, according to an independent study published online 3 February in Behavioral Genetics.

Andrey Anokhin and colleagues at Washington University School of Medicine examined how 47 pairs of identical twins and 51 pairs of fraternal twins, all 12 years of age, responded to images of happy, fearful or neutral facial expressions.

About once every second, the researchers replaced each photo with a new one of the same person sporting a different facial expression. Participants wore electrodes on their scalp that measured their changing brain waves during the task.

Anokhin’s team found that identical twins have more similar brain-wave patterns than do fraternal twins. They estimate that 36 to 64 percent of the individual differences in processing emotional expressions is a result of the difference in genes.

“To my knowledge, this is one of the first studies to show that processing of emotional expressions [is] largely determined by genetic factors,” says Anokhin.

The new studies are consistent with previous research implicating a genetic component in facial recognition, notes Michael Tarr, co-director of the Center for the Neural Basis of Cognition at Carnegie Mellon University, who was not involved in the new studies.

For instance, individuals with an inherited condition known as congenital prosopagnosia, or ‘face blindness’, cannot recognize faces, even though they retain the ability to identify many other classes of objects5.

Although the genetic influence is substantial, the studies highlight the fact that environmental factors and epigenetic changes — those that turn genes on or off without changing the underlying DNA code — also contribute to facial recognition.

“This is consistent with what we know from studies on autism as well,” says Mustafa Sahin, professor of neuroscience at Harvard University, who was not involved in either study.

Genes play a greater role in the risk of autism than in any other common neurodevelopmental disorder, with a reported heritability of about 90 percent6. Still, this means that environmental and epigenetic factors probably play a role in at least 10 percent of cases, he says.

To find out whether specific genetic factors cause the face-processing deficits seen in autism, researchers would need to repeat the studies in infants with and without the disorder, Sahin says. “Studies in young children could allow early detection of abnormalities in visual processing.”