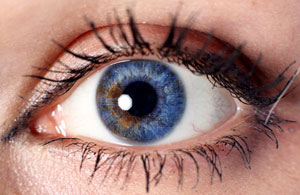 Shifting focus: People with autism struggle to accurately shift their gaze, a problem that may contribute to social deficits characteristic of the disorder.

Problems with eye movements in people with autism are part of their motor difficulties and may contribute to the social deficits characteristic of the disorder, according to unpublished research presented last week at the Salk Institute, Fondation IPSEN and Nature Symposium on Biological Complexity in La Jolla, California.

Some studies have found that people with autism have difficulty with saccades, the rapid eye movements that occur when a person shifts his or her gaze from one point to another.

In the new study, researchers measured saccades in 20 children with autism and 20 controls, all between the ages of 8 and 15 years.

They found that children with autism have less accurate saccades, winding up farther from the target than controls do. They also require more saccades to shift their focus and take longer to initiate these eye movements.

The participants also completed a battery of 30 tests measuring their ability to plan and carry out various body movements, such as brushing their hair, touching their thumbs to each finger in sequence, and puffing out their cheeks or making other facial gestures.

People with autism do worse on many of these tests than controls do, a condition that is collectively referred to as apraxia. Among children in the autism group, those who do worse on one group of apraxia tests have poor saccade control, as well as poor social skills, the study found.

A 2011 study found that people who have autism have more trouble with eye movements than those who have Asperger syndrome, a disorder on the milder end of the autism spectrum.

However, the new study found no differences between people with autism and controls on the ability to carry out common sequences of actions or imitate gestures, such as waving goodbye.

That’s unexpected, because people who have autism often struggle with these behaviors in real life and previous research has pointed to difficulties with imitating gestures.

The tests in the new study probably weren’t difficult enough to pick up this type of difference between the groups, says Michael Miller, a medical student who worked on the project in Doris Trauner’s lab at the University of California, San Diego. “There’s no standardized testing available for apraxia, so each lab has to invent their own battery,” Miller says.

The findings highlight the challenge of studying apraxia, an area of growing interest in autism research.