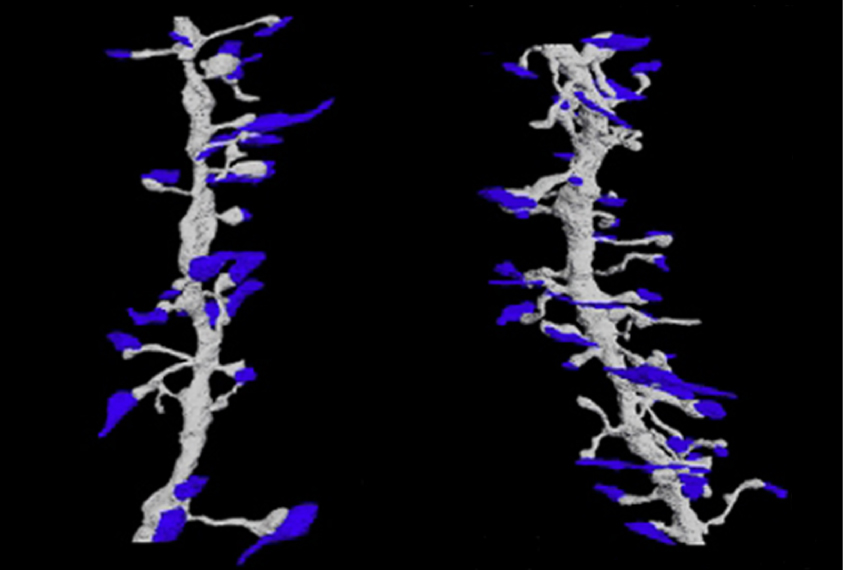 Surplus protein: Male mice that overproduce proteins in microglia have enlarged microglia and more synapses (right) than controls do (left).

The overproduction of proteins in brain cells called microglia causes social impairments, cognitive deficits and repetitive behavior in male mice, a new study has found.1 These behavioral differences are not present in female mice, or in mice that produce excess protein in other brain cells, including neurons or star-shaped support cells known as astrocytes.

Microglia help eliminate excess synapses — connections between brain cells — that form early in life; this pruning process is crucial to healthy brain development. But male mice that have been engineered to overproduce proteins in these cells have enlarged microglia. That, in turn, lowers the cells’ mobility and may prevent them from migrating to synapses that need eliminating.

In support of that idea, the mice have too many synapses, the researchers found — a result that mirrors evidence that certain brain regions may be overconnected in people with autism.

“Increased protein synthesis in microglia is sufficient to cause autism phenotypes in mice,” says lead investigator Baoji Xu, professor of neuroscience at the Scripps Research Institute in Jupiter, Florida. “Problems in microglia could be an important pathological mechanism for autism.”

The researchers studied mice that produce excess levels of EIF4E, a protein that facilitates the synthesis of other proteins. Mutations in several genes linked to autism — including TSC1, TSC2, PTEN and FMR1 — are associated with elevated levels of an active form of EIF4E and, as a result, many other proteins in the brain. Mice that overproduce EIF4E also display autism-like behavior, researchers have previously found.

These findings have led researchers to theorize that increased protein production in the brain may underlie autism and several related disorders. But the precise link has remained unclear — at least until the new work.

“By looking at different cells within the mouse brain, they were able to demonstrate the mechanism,” says Zosia Miedzybrodzka, professor of medical genetics at the University of Aberdeen in Scotland, who was not involved in the research. “Understanding if these same mechanisms are at work in humans is key.”

Xu’s team engineered mice that overproduce EIF4E in specific brain cells: microglia, astrocytes and neurons. Then they put the mice through a battery of behavioral tests. They found that male mice that make extra ElF4E in their microglia are less social, have problems with learning and memory, and overgroom — traits considered analogous to those seen in autistic people.

Although female mice also produced excess protein in their microglia, they did not display the same behavioral changes. Nor did mice that overproduced EIF4E in astrocytes or in neurons, although the latter displayed signs of anxiety. The study was published in April in Nature Communications.

Male mice with excess microglial EIF4E have more and larger microglia than control mice do, but their cells are less mobile, and the animals have more synapses.

“Although the microglia are bigger, they aren’t able to migrate,” Xu says.

Together, the findings suggest that in male mice, protein overproduction impairs the ability of microglia to travel to synapses that need pruning, altering the animals’ brain circuitry and behavior in ways that resemble autism in people.

The research provides convincing evidence that the overproduction of proteins in microglia can cause autism-like features, says Eric Klann, director of the Center for Neural Science at New York University, who was not involved in the research.

But Klann says he is not ready to rule out the possibility that elevated protein levels in neurons may play a role, too; ramping up protein production in all of the brain’s neurons may have masked an effect in certain sub-populations of the cells.

“It would be interesting if they had done this manipulation looking at specific subtypes of neurons,” Klann says.

It is also not yet clear why none of the microglial abnormalities appeared in female mice, Xu says, but the finding is especially intriguing given that autism is more common in boys than girls.

“You have a mechanism that points to why there might be a sex bias in autistic spectrum disorder, which has thus far been elusive,” Miedzybrodzka says. Drugs that target microglia might be developed to treat autism and related conditions, she says.

Xu and his colleagues are trying to figure out why female mice seem to be protected from the consequences of protein overproduction in microglia, and to identify specific proteins that might cause the abnormalities in the cells.