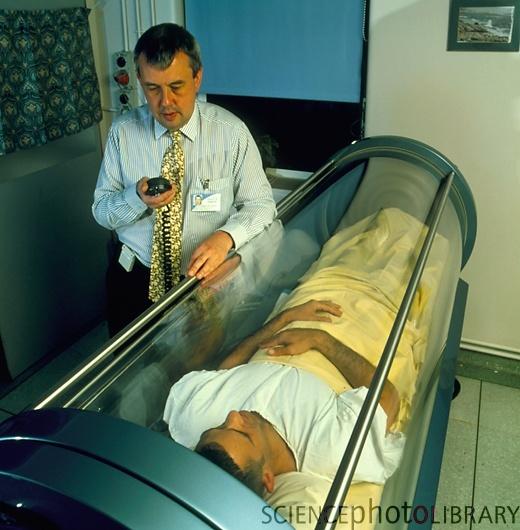 A much-publicized study reporting social and cognitive improvements in children with autism who breathed pure oxygen in a high-pressure chamber has met with skepticism from other autism researchers.

Although the report is the first attempt to rigorously evaluate the potential of the therapy for individuals with autism, experts say the study’s method and conclusions are questionable.

The fact that the study was funded by an organization that promotes hyperbaric therapy also questions the integrity of the work, they note.

“I just think that the methodological flaws in this study precludes one’s being too excited about this,” says Paul Offit, chief of infectious diseases at the Children’s Hospital of Philadelphia and the author of the book Autism’s False Prophets. “It would be nice to see this study repeated properly at an academic institution.”

During hyperbaric treatment, patients inhale pure oxygen in a sealed chamber that is usually pressurized at more than 1.5 times the normal atmospheric pressure. The therapy is known to be a lifesaving remedy for conditions such as carbon monoxide poisoning and decompression sickness, but its potential for helping individuals with autism has been scientifically dubious.

That dearth of rigorous data is what motivated the first randomized, double-blind, controlled investigation of the therapy on children with autism, says lead author Daniel Rossignol, a physician and researcher at the International Child Development Resource Center in Melbourne, Florida.

In the month-long study, researchers exposed 30 children at eight centers to 40 one-hour treatments in a hyperbaric chamber containing 24 percent oxygen at 1.3 atmospheres of pressure. The control group of 26 children meanwhile received 21 percent oxygen, a normal level, in a room slightly pressurized at 1.03 atmospheres.

At the end of the month, the researchers found that 30 percent of those in the treatment group were “very much improved,” compared with only 8 percent in the control group. Behavioral improvements included reductions in irritability, hyperactivity and repetitive behaviors.

“Obviously we understand that [hyperbaric therapy] is not going to cure anybody with autism, but it could be used as one more tool that might benefit a child,” says Rossignol.

The $180,000 study was funded by the International Hyperbarics Association, an organization that has an obvious vested interest in favorable findings about hyperbaric therapy. Rossignol and his coauthors openly declare this conflict of interest, but observers note it is still imperative for outside researchers to repeat the work.

Offitt and others also point out a number of methodological problems that need to be ironed out in future work.

The biggest problem with the study is observer bias, says Offit. Because parents were sometimes present in the hyperbaric chamber with their children, he says, they may have been able to perceive whether their children were receiving oxygen under increased pressure, which in turn may have affected their assessments of the children’s progress.

Offit also notes that the researchers did not control for variations in atmospheric elevations at the different study sites.

Children with autism often struggle with other medical issues, including neurological problems such as epilepsy, sleep disturbances, and sensory and motor deficits, so it is difficult to discern exactly which condition hyperbaric therapy might benefit, notes Richard Mills, research director of the UK-based nonprofit Research Autism.

In future studies, adds Anthony Bailey, a professor of psychiatry and head of the Autism Research Group at Oxford University, it will also be important to use more powerful diagnostic instruments that are designed to measure even the smallest changes in behavior, rather than using generic diagnostic tests that look at overall functioning.

Researchers must also assess the therapy over a longer period, Bailey says. “When you think about autism as a lifelong disorder, a month’s timeframe is very short.”

Side effects of hyperbaric therapy include bruised eardrums and claustrophobia. Breathing high-pressure oxygen for too long can also cause oxygen toxicity.

These side effects are relatively minor in comparison to the serious problems associated with some pharmacological medications, says Mills, but it’s still important for families stay realistic about the potential of oxygen therapy.

“Hyperbaric therapy isn’t science fiction, as some interventions for autism are,” says Mills. “This is certainly a step in the right direction for some forms of autism, but it’s not the universal answer.”