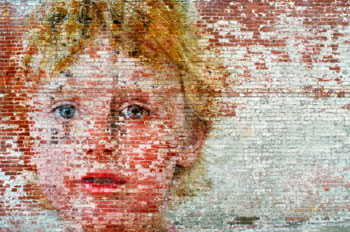 Defining ‘autism’, a single word encompassing a wide spectrum of behaviours, is no easy task.

It has become clear over the past few years that the biology underlying autism is similarly multifarious, with hundreds of potential genetic, developmental and environmental causes.

Still, researchers are on the hunt for a biological signature of autism, one they say is the unmistakable core — a distinctive mix of social disinterest and repetitive behaviours — that marks every individual with the disorder.

“That’s the big mystery,” says David Amaral, a neuroscientist at the MIND Institute at the University of California, Davis. “How could so many different aetiologies, so many different genetic risks, lead to a behavioural syndrome that a clinician could say, ‘Well, that person has autism’?”

Since Leo Kanner defined autism in 1943, its symptomatic profile has widened dramatically. It now includes not only social impairments and repetitive behaviours, but many associated ones, such as motor problems, hyperactivity, seizures and distinctive facial features.
Autism’s prevalence has also grown. As recently as the mid-1990s it was thought to be rare, occurring in 1 in every 2,500 people. Estimates published in 2012 by the US Centers for Disease Control and Prevention put it at 1 in 88.

Many theories attempt to explain this spike, although no single theory accounts for all of it.

A substantial component of the risk is demonstrably genetic. When one identical twin has autism, for example, there is a roughly 70% chance that the other will also have the disorder.

Many research teams have searched for genes that may be involved. They haven’t turned up any prime candidates yet, only dozens, even hundreds, of bit players. “I truthfully believed that sporadic autism, like Kanner had described it, might be caused by a handful of genes with maybe one predominant gene,” says Huda Zoghbi, a geneticist at Baylor College of Medicine in Houston, Texas, who in 1999 first identified the gene that causes an autism-related condition called Rett syndrome. “Little did we know.”

To complicate matters, many of the genetic blips associated with autism are found in the general population, too. Still, some themes are emerging. For example, many of the genes function at the synapse, the junction between neurons, which has led many pharmaceutical companies to begin early investigations of drugs that target this part of the cell. But the genetic findings are hardly simple. Other implicated genes are related to an array of cell functions, from the immune system, to gastrointestinal repair, and even the production of cellular energy.

Part of the increase must be due to greater awareness. As more people learn about autism, it is likely that more people will spot early signs and seek help. This happens more quickly in some regions than others, depending on cultural and socioeconomic factors. A mix of demographic differences could help explain why, for example, there is a four-fold difference in autism prevalence between Utah, the US state with the highest rate, and Alabama, which has the lowest. 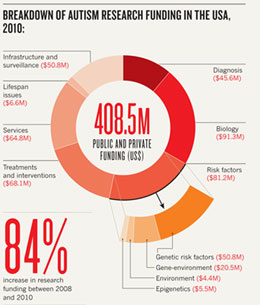 The rise of autism: Once thought of a rare disease, autism’s prevalence, funding and research have risen dramatically over the past twenty years. Click to enlarge image »

Autism is also diagnosed differently these days. The widening criteria for diagnosis means that many high-functioning people with autism might have gone undiagnosed in the past. Conversely, some of those who have severe cognitive problems might have been diagnosed with mental retardation.

The rapidly rising prevalence has also led scientists to look at environmental causes.

A small part of the increase in autism seems to result from ageing fathers, for example. As men age, their sperm acquires harmful mutations that can be transmitted to the child.

There are any number of other theories, some more plausible than others: the distribution of gut bacteria, autoimmune conditions in the mother, fetal exposure to drugs such as antidepressants, or even living near main roads.

“There have been so many changes in lifestyles,” Zoghbi says. “Everything is game.”

Despite this seemingly endless list of causes and consequences, researchers are looking for commonalities at every biological level, whether in the genome, a brain circuit or even a style of thinking.

For example, in the 1980s, Uta Frith and colleagues proposed that people with autism lack ‘theory of mind’, the ability to grasp what others think or believe. Researchers have since localized this ability to a part of the brain called the temporoparietal junction.

Pairing these kinds of cognitive studies with molecular ones will be crucial to understanding the disorder, says Frith, a developmental psychologist at the Institute of Cognitive Neuroscience at University College London. “You must look at the right level to pull all of the strings together and to talk about this unity of experience that I would call autism.”