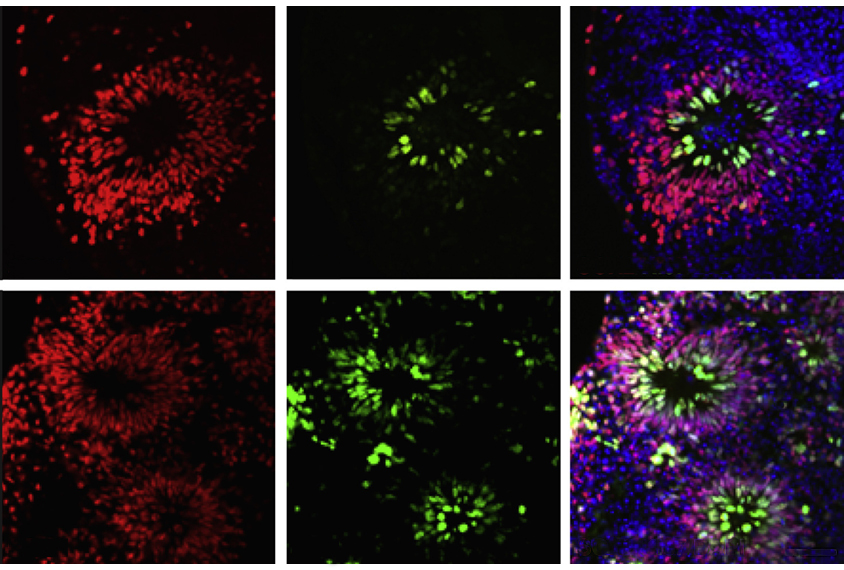 Investigational drugs that inhibit enzymes involved in protein production partially normalize the maturation of brain cells derived from boys and men with fragile X syndrome, according to a new study.

The drugs could one day help treat problems linked with the syndrome, says Randi Hagerman, professor of pediatrics at the University of California, Davis, who did not take part in this research. “Clinical studies need to see how safe and effective they might be, but they are exciting potential treatments.”

Fragile X syndrome is the most common inherited form of intellectual disability and a leading genetic cause of autism. Most cases stem from mutations that silence the gene that codes for FMRP, which helps control protein synthesis. According to a leading theory, loss of FMRP leads to excess protein production at synapses, causing them to malfunction and giving rise to the syndrome’s characteristic traits.

In the new study, published in April in Cell Reports, Bassell and his colleagues explored how FMRP loss affects immature brain cells.

They used human induced pluripotent stem cells, which can develop into virtually any cell type, derived from the skin cells of seven boys and men with fragile X syndrome, aged 8 to 30, and five without.

The researchers coaxed those stem cells into becoming neural progenitor cells, which in turn gave rise to neurons and then brain organoids, tiny balls of cells that in some ways imitate the structure and function of the human brain.

Throughout the process, they analyzed how the cells grew, divided and matured into different types, and monitored what proteins they synthesized.

Just like mature fragile X neurons, the developing cells show an unusually high rate of protein synthesis, the researchers found, including elevated production of a cell-growth enzyme called phosphoinositide 3-kinase, or PI3K. These anomalies were especially marked during early stages of the progenitor cells’ maturation, when the cells are proliferating.

Because of these molecular abnormalities, the cells kept growing and dividing instead of maturing into neurons and other types of brain cells, the team discovered.

Treating the cultures with two different investigational drugs that inhibit the PI3K pathway tamped down excess protein synthesis and normalized the maturation of the fragile X cells, but only for some early cell types. A better understanding of the pathways behind neural development may be needed to rescue the fates of all cell types in fragile X syndrome, says lead investigator Nisha Raj, a postdoctoral fellow in Bassell’s lab.

The fragile X drugs that failed in clinical trials often targeted cell surface receptors, such as mGluR5, to keep protein synthesis in check. By contrast, one of the new investigational drugs blocks a specific component on PI3K. Directly inhibiting the enzyme in this way may prove more successful than previous methods, Bassell says.

An important next step will be to find the optimal times for treatment in people, “which may differ from mouse models,” says Christina Gross, associate professor of neurology at Cincinnati Children’s Hospital in Ohio, who was not involved in this study. “This is particularly important in light of recent large clinical drug trials in fragile X syndrome that did not detect clear treatment effects despite positive findings in mouse models.”

Because the study examined only cells from boys and men with fragile X syndrome, it remains unclear whether or how the findings will apply to girls and women with the condition, Raj says. But how fragile X syndrome unfolds in girls is understudied, she says, “and this is something I am interested in studying in my future work.”

Analyzing the development of immature brain cells derived from people with neuropsychiatric conditions could help scientists pinpoint a range of possible new therapies, Raj adds. “A future goal is personalized medicine, whereby ‘disease in a dish’ approaches can be used to test efficacy and compare multiple potential treatment options.”