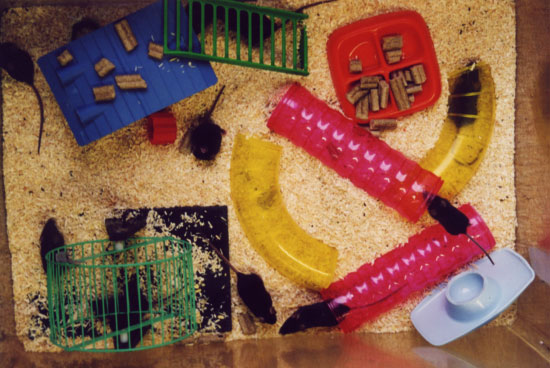 Giving mouse models of Rett syndrome access to toys, wheels and contact with other mice rescues motor skill and other deficits characteristic of the disorder, according to results presented in a poster session Wednesday at the Society for Neuroscience meeting in Chicago.

Rett syndrome, which occurs mostly in girls, is marked by an apparently normal infancy, followed by a progressive deterioration of motor, social and intellectual skills beginning in early childhood. Children with Rett syndrome often show autism-like behaviors in the syndrome’s early stages.

A decade ago, researchers discovered that mutations in the MeCP2 gene lead to Rett syndrome and, in 2002, scientists created the first mouse model of the disorder.

Exposing Rett mouse models to an enriched environment has, in previous studies, produced mixed results. For example, in a study published last year, researchers gave mice access to toys, wheels and other mice starting at 4 weeks of age, shortly after being weaned from their mothers. The researchers found that the enriched setting improves motor skills in female mice, but not in males1.

Levels of brain-derived neurotrophic factor, or BDNF — a gene target of MeCP2 that’s thought to be important for learning and memory — does not increase in the male mutant mice but does in the females.

To investigate the benefits of an even earlier intervention, scientists gave Rett mice access to tubes and wheels, and to other mice, including their mothers, beginning at 10 days after birth.

At 30 days, mutant mice in the enriched environment have better motor skills than those kept in standard cages, and they learn tasks as easily as normal mice do. The intervention also ups BDNF levels, but not quite to the level of control mice in the enriched setting, the researchers found.

“In our hands, it worked. Starting early is key,” says lead investigator Maurizio Giustetto, a professor of anatomy at the University of Torino in Italy. His group collaborated with Tommaso Pizzorusso of the Consiglio Nazionale delle Ricerche in Italy.

Using high-resolution microscopy, the group looked closely at synapses, the connections between neurons, to asses the proportion of excitatory synapses to inhibitory ones. An imbalance between the two kinds is thought to underlie Rett syndrome and autism.

Mutants given enriched settings have higher numbers of excitatory synapses compared with untreated mutants, the team found; the number of inhibitory synapses does not change. Analyzing the electrical activity of neurons, the group also found that enrichment improves the strength of the connections between neurons, a process important for learning and memory.

The group has thus far analyzed brain slices in a dish, but they plan to develop methods to examine the cells and circuits in whole animals.