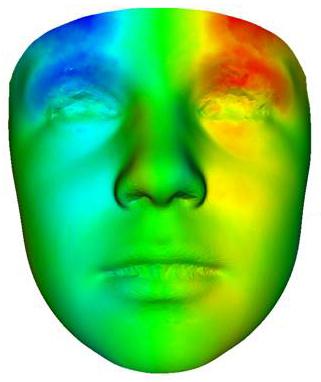 Right side up: Boys with autism have more prominent features on the right side of their face, based on three-dimensional dense surface models.

Boys with autism have asymmetrical faces: their forehead and brow is larger and more prominent on the right side of the face than on the left.

That’s the observation from three-dimensional surface models of face shape that detect differences undetectable to the naked eye.

How such a notoriously heterogeneous disorder is also one of the most highly heritable remains a mystery. So far, the handful of genes associated with the syndrome individually account for no more than 1-2 percent of autism cases2.

With genetics yielding slow clues into dozens of genes and pathways, some researchers say the disorder should be dissected into quantifiable autism-specific behaviors, cognitive abilities or biological traits ― such as facial asymmetry or age at first word ― that can be traced back to specific genes.

Dubbed endophenotypes, these are stable, characteristic traits that are governed by fewer genes ― thereby reducing the complexity of autism into discrete measures.

“It’s open season on endophenotypes,” says John Constantino, professor of psychiatry at Washington University School of Medicine in St. Louis. “Things we never imagined may turn out to be important in the neurobiological pathway to autism.”

Establishing an endophenotype is no simple task. The term is sometimes used to simply denote a symptom associated with autism.

But to be useful for finding genes associated with it, an endophenotype must be an autism-specific trait ― preferably quantifiable ― with proven heritability.

“Quantitative traits provide more power than the categorical traits used to clinically define a disorder, which are arbitrary by nature because you have to put the cutoff somewhere,” says Daniel Geschwind, professor of neurology and psychiatry at the University of California at Los Angeles.

Few endophenotypes meet these criteria. One that does, chromosomal position linked to language delay, has pinpointed specific genes linked to autism.

For his first attempt to link an autism-specific trait to a gene, Geschwind chose to use specific traits of language delay ― such as the age at which a child speaks his or her first word or phrase3― because evidence that this characteristic is inherited already existed4.

Using genetic linkage and gene expression studies, Geschwind and his colleagues in January linked the gene CNTNAP2 as a language-specific gene expressed during development to autism5. Two other papers earlier this year also reported CNTNAP2 as a common genetic variant in familial risk of autism6,7.

Because the brain’s structures are known to be more heritable than behavior, imaging also offers ripe possibilities for quantifiable endophenotypes. A collection of imaged brain structures, although expensive, would yield enough data to keep geneticists busy for years to come, Geschwind says.

For example, fMRI studies have identified an unusual signal in the cingulate cortex8 that suggests that individuals with autism are unable to see their own role in social situations.

Researchers asked young boys with autism to first watch others do certain things such as kick a ball or dance, then imagine themselves doing the same thing. This allowed researchers to establish ‘other’ versus ‘self’ brain signals in the cingulate cortex, a region of the brain involved in decision-making.

The researchers then asked the boys to participate in an economic exchange game designed to evaluate ‘self’ and ‘other’ responses during social interactions. The imaging revealed that boys with autism have reduced cingulate activity while playing the interactive game, and the degree of this reduction correlates with the severity of the disorder.

By quantifying behavioral characteristics using such brain images, researchers may eventually be able to identify genes associated with those behaviors. Measuring these signals could also eventually lead to a diagnostic tool to assess the severity of autism.

“I wasn’t going after an endophenotype, and I don’t think it’s one yet,” says Read Montague, director of the Human Neuroimaging Lab at Baylor College of Medicine in Houston. “We need to repeat it in more autistic kids as well as family members.”

When there are no easily quantifiable data, however, defining endophenotypes is more difficult.

Constantino has spent the past 10 ten years trying to prove that social responsiveness can be a useful endophenotype for autism. He developed a social responsiveness scale using 65 questions that measure how socially aware a child with autism is and how well the child engages in a reciprocal interaction.

These are subjective questions, however, and hard to quantify.

“Historically, behavior has been a difficult thing to hang your hat on,” Constantino notes. But his social responsiveness scale scores have been proven heritable, stable over time and reliable whether parents or teachers assess the child with autism9,10.

Scanning the genomes of parents and children from more than 100 families with two or more children with autism, Constantino identified two areas, located on chromosomes 11 and 17, that relate to social responsiveness11.

Some researchers prefer to rely strictly on physiological or biological endophenotypes in the hopes that these traits are more indicative of the genes responsible.

No one knows what causes any of these traits, but studying them might still reveal something about the disorder’s origins, says Anthony Persico, a molecular psychiatrist at the University Campus Bio-Medico in Rome.

“I couldn’t care less that we didn’t know what these traits yet mean,” Persico says. “I think that finding an explanation for why patients have too much serotonin or peptide in their urine will better help us determine why they are autistic.”

Earlier this year, using a family-based association study, Persico reported that a specific genetic variant of the protein kinase C family ― which includes enzymes important for regulating gene expression and signal transduction ― is significantly associated with autism. Individuals with this variant also secrete large amounts of proteins in their urine12, suggesting a way to perhaps trace the underlying physiological causes of autism.

In a study last year, Persico found an association between larger head sizes and a history of allergic or immune disorders both in the individuals with autism and in their first-degree relatives13.

“I never would have predicted that head size would have any correlation with immunity in first-degree relatives,” Persico says.

Unrelated work in 1996 by another group showed that mice lacking the protein kinase C gene are immunosuppressed, meaning that their immune systems have trouble marshaling defenses against foreign invaders14. There is mounting evidence to suggest that the genetic underpinnings of autism might be mediated by the immune system, Persico says.

The shape of the head may be as informative as head size, as Lewis’ work reveals. In the facial asymmetry study, unaffected mothers of children with autism display similar asymmetry, although unaffected fathers are no different than controls, Lewis says.

Studies on first-degree relatives, particularly mothers, are under way and may help determine whether maternal genes are at fault, Lewis says.

What’s missing from these genetic studies, however, is a link to cognitive abilities, says Uta Frith, emeritus professor of cognitive development at University College London.

Biological and behavioral endophenotypes have too many confounding factors to meet with much success, Frith says, adding that what scientists consider an endophenotype may in fact be a secondary consequence or compensatory event to autism.

In contrast, she says, a cognitive endophenotype based on her concept of the theory of mind ― the specific lack of cognitive capacity in individuals with autism ― can reconcile many biological causes and behavioral manifestations.

“Endophenotypes at the cognitive level have a realistic chance of pulling together the biological and behavioral strings into a middle ground,” she says.

For example, a cognitive endophenotype that can assess a child’s capacity for pretend play could help understand the social aspects of autism, Frith says. But developing the appropriate tests for each age group is likely to cost a great deal of time and money.

Despite endophenotypes’ promise, some researchers also caution against the temptation to dismantle autism into its individual clinical or endophenotypic components.

“There is little empirical justification to think that the social deficits are caused separately from language deficits or repetitive behavior, and that these three pathways somehow come together to cause autism,” says Constantino. For example, family members who are subtly affected with symptoms are affected across all three areas.

Researchers should instead focus on how different genetic perturbations can consistently cause these specific disruptions across three domains of function.

There must be a reason these symptoms hang together, Constantino notes. “Every time we try to tease apart the components of autistic syndrome in a big population, we can’t.”