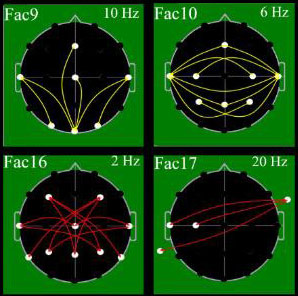 Electrical energy: This bird’s-eye view of the scalp shows which electrodes have coordinated activity. Yellow lines indicate a weaker association in the autism group compared with controls, and red linesindicate greater association.

Electrical energy: This bird’s-eye view of the scalp shows which electrodes have coordinated activity. Yellow lines indicate a weaker association in the autism group compared with controls, and red lines
indicate greater association.

Two new studies of the brain’s electrical activity — one in children with autism and the second in infants at high risk for developing the disorder — bring the field one step closer to a physiological measure that can detect autism and predict who will go on to develop it.

In one study, published in PLoS One in June1, Charles Nelson and his collaborators analyzed brain activity in infants who have a sibling with autism. These ‘baby sibs’ are at up to a 20-fold greater risk of developing the disorder compared with the general population.

The researchers found that the baby sibs have lower-than-normal activity across many different frequencies of brain activity, as measured by electroencephalography (EEG) ― a non-invasive technique that measures the brain’s electrical activity through electrodes placed on the scalp.

Between 6 months and 2 years of age, each component of brain activity in baby sibs has a unique trajectory compared with controls. The patterns converge at age 2.

“This is one of our first insights into the developmental trajectory [of brain activity] of infants at risk,” says James McPartland, assistant professor of psychology at Yale University, who was not involved in either new study. “It’s promising because a large body of literature using behavioral methods has failed to find differences that early.”

Most of the children in the study aren’t old enough to be diagnosed with autism, so it’s not yet clear whether the brain activity patterns predict which of the infants will go on to develop the disorder.

In the second study, published in June in BMC Medicine, researchers used an EEG analysis technique called principal component analysis to show that they could distinguish between children with autism and controls with about 90 percent accuracy2.

For both studies, a crucial next step will be to show that EEG analysis can distinguish between autism and other developmental disorders. This type of specificity is a critical feature for predictive and diagnostic tools.

Over the past few years, scientists have been on the hunt for early predictors of autism, especially among high-risk infants, so that they can begin therapy as early as possible.

In a long-term study published in January, Mayada Elsabbagh, assistant professor of psychiatry at McGill University in Montreal, and her collaborators showed that baby sibs who are later diagnosed with autism have a different pattern of brain activity in response to gaze than baby sibs who do not receive a diagnosis.

Nelson and his colleagues tracked brain activity in baby sibs from 6 to 24 months of age. “At every age except 24 months, the high-risk infants show dramatically less activity than the low-risk,” says Nelson, professor of pediatrics and neuroscience at Harvard Medical School.

The rhythmic brain activity detected by EEG is typically divided into different frequency bands, which are thought to reflect different cognitive states, such as attention or drowsiness.

Nelson’s team initially focused on the so-called ‘gamma frequency,’ thought to be an indicator of connectivity. One hypothesis for autism is that abnormal connections — notably a decrease in long-range connections — lead to the symptoms of the disorder. However, this hypothesis has recently been called into question.

Expanding the analysis to look at all the frequency bands revealed that “the developmental curve is very different for each bandwidth,” says Nelson. “So each one may be reflecting a different aspect of brain development.”

As the infants in the study turn 3 years old — the age at which an official autism diagnosis can be made — researchers plan to look for patterns that distinguish children who receive a diagnosis from those who do not.

To try to understand the meaning behind the unique trajectories in baby sibs, they also plan to look at whether brain activity patterns correlate with specific outcomes, such as language skills.

“If they can see trajectories that are linked to specific behavioral phenotypes later in life, it would help us understand what we already know about the autistic phenotype,” says McPartland.

In the BMC Medicine study, Frank Duffy and Heidelise Als compared brain activity patterns in 430 children with autism and 554 controls, ages 2 to 12. Duffy says they excluded children on the extreme ends of the spectrum, such as those with Asperger syndrome, to avoid confounding the results.

Rather than compare specific frequency bands, the researchers looked at spectral coherence, a measure of the similarity in electrical activity at pairs of electrodes on the scalp.

The benefit to this approach is that it doesn’t require researchers to hypothesize which components of brain activity are likely to differ, instead giving an unbiased view into activity across the entire brain.

However, the technique involves many variables — such as the different frequencies and locations on the scalp — which in turn raises the risk of spurious correlations. “If you have 24 electrodes and look at all the possible combinations and frequencies, you come up with 4,416 variables per individual, which is unwieldy,” says Duffy, director of developmental neurophysiology at Boston Children’s Hospital.

Using principal component analysis, the researchers looked at which variables increase and decrease together, and found patterns where they naturally grouped together. When they analyzed children with autism and controls together, they found that a set of 40 variables could capture half the information present in the original 4,416.

Running this analysis multiple times in different subgroups, they showed the algorithm could detect those who have autism with 90 percent accuracy.

“This is one of the largest EEG studies in autism,” says McPartland. One advantage of the study is that it is based on children who came in for regular clinical care, he says, which means that the approach could one day be tested and implemented in a clinical setting. But given the broad age range of the group, it’s unclear whether the differences in brain activity are a cause or consequence of the disorder.

Duffy’s team is analyzing brain activity in children with other disorders, such as Down syndrome and language impairments. The ability to distinguish among different disorders is imperative if the approach is to be used as a diagnostic tool.

“We’re getting good at showing this is not a typical brain,” says McPartland. “But we don’t yet have data yet to show that this is a depressed brain or a brain with autism or [attention deficit hyperactivity disorder].”

Nelson’s team also plans to look at other subgroups of children — for example, baby sibs who do not meet the criteria for autism but who have other developmental problems.

“Because the symptoms of autism exist on a continuum, any one measure may not have the sensitivity to detect a difference,” Nelson says. “What I hope these brain-based measures will do is facilitate more fine tuning of the disorder, rather than relying solely on behavioral expression.”