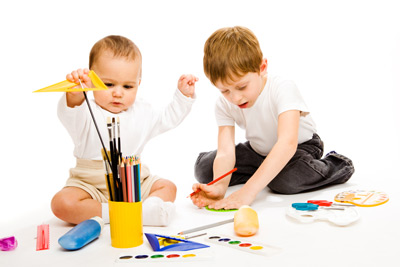 A new study finds that at 9 months of age, babies who go on to be diagnosed with autism show few behavioral signs distinguishing them from either their typically developing peers or those with disorders such as cerebral palsy, speech impairments or intellectual disability.

By age 2, however, these children show difficulty with movement, communication, emotional control and problem solving, reports the study, published 19 February in the Journal of Early Intervention1.

The findings indicate that autism can be identified as early as age 2. In the U.S., the average age of autism diagnosis is 4 years.

Diagnosing children earlier can give them access to treatments, says lead investigator Rosa Milagros Santos, professor of special education at the University of Illinois at Urbana-Champaign.

Santos and her colleagues used data from the Early Childhood Longitudinal Study, Birth Cohort, a nationally representative sample of U.S. children born in 2001 and followed through kindergarten. Unlike studies that rely on parental memory or home videos to identify autism’s early signs, the researchers collected cognitive, social and behavioral information as the children grew. They relied on parents to report whether their children had a diagnosis of autism at age 4.

“The beauty is that this is happening at the same time the parents are reporting it,” Santos says. “You’re not relying on the memories three or four years from now.”

The new findings are in line with those of other studies looking for large-scale differences in behavior to predict autism in infant siblings of children with autism. These so-called ‘baby sibs’ are at a 20-fold increased risk of autism compared with their peers.

But by definition, baby sibs don’t represent the general population and may have distinct characteristics.

“There is a question about the generalizability of the findings from those prospective family studies,” says Rebecca Landa, director of the Center for Autism and Related Disorders at the Kennedy Krieger Institute in Baltimore, who was not involved in the new work.

The new study found early predictors in a general-population-based sample, suggesting that the same markers gleaned from baby sibs can detect autism in other populations.

The study examined about 100 children with autism, 1,100 with disabilities such as hearing impairments or intellectual disability and 7,700 typically developing children.

Trained interviewers administered developmental surveys and tests to the children at home at 9 months of age and again at 2 years of age. At 9 months, the children later diagnosed with autism were more likely than children in the other two groups to wake up three or more times a night.

At both ages, those in the autism and disability groups are more likely than the controls to transition quickly from whimpering to intense crying. This suggests that the children have trouble managing their emotions, the researchers say.

However, 9 months is a key period in child development, says Sylvie Goldman, clinical assistant professor of neurology and pediatrics at Albert Einstein College of Medicine in New York, who was not involved in the study.

“That’s the time of separation anxiety,” Goldman says. “Children are going to be much more irritable, less engaging and they’re going to be fearful when someone new comes in. You might actually identify things that are just part of normal development.”

The differences among the groups became more obvious at 2 years. Parents in the autism group reported that their children used about 10 words, compared with about 22 for the disability group and about 30 for the controls.

The children later diagnosed with autism also performed significantly worse at age 2 than the other two groups on their ability to name objects, listen to others and recognize and use words. On another test, children in the autism group did not match colors or use numbers as well as those in the other two groups.

They also had trouble grasping and manipulating small objects and difficulty with sitting, standing and walking. Other studies have shown that children later diagnosed with autism show a number of motor delays beginning in the first few months of life, including having floppy arms and difficulty sitting up.

Those in the autism group also demanded more of their mothers’ attention and became more inconsolably upset when they were separated from their mothers compared with children in the other two groups.

“I do think it’s part of autism, this inability to self-soothe,” Goldman says. “It’s not a marker, but something very specific to autism.”

Some of the sharp behavioral differences in the autism group may have prompted the families to enroll their children in therapy, Santos says.

“If you take [these signs] all together, you can see there is something to be concerned about,” Santos says. “It’s not just about one thing or two things.”

By age 4, 95 percent of children with autism received speech or language therapy, and 81 percent had occupational therapy to help them engage in daily activities such as brushing their teeth.

In contrast, among children with disabilities, 39 percent and 25 percent received these kinds of therapy, respectively. Less than 1 percent of typical children are enrolled in these services.

The study’s findings serve as a reminder for doctors to listen to parents, Landa says. “What the parents are reporting might be the tip of the iceberg,” she says. “When they become concerned, turn the stone over and look under it.”