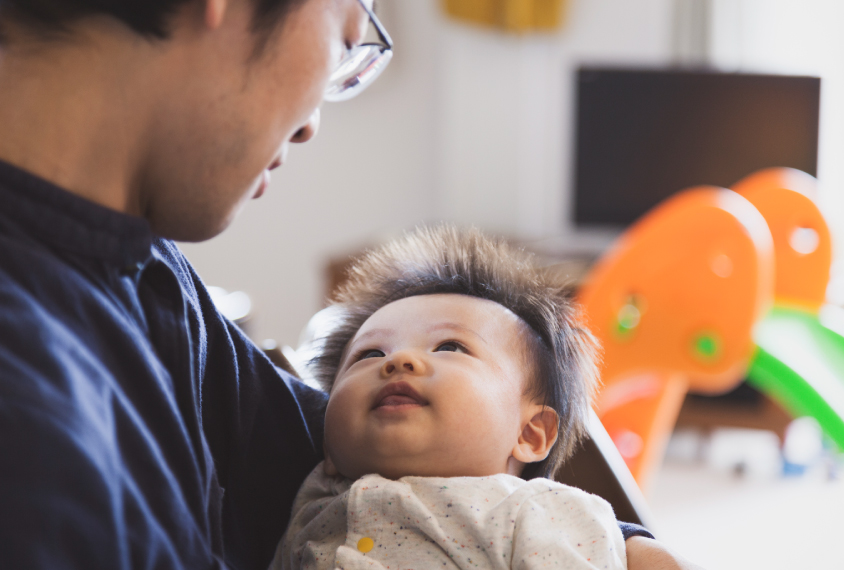 Chitchat: Talking to infant siblings of autistic children may boost their language skills.

The more words autistic children hear as infants — and the more verbal interactions they have with their caregivers — the better their language skills at age 2, a new study suggests1.

The quantity of speech young children hear in the home is known to have a strong influence on language development and in turn, on reading skills and ‘school readiness’2.

The new study is the first to look at this association in autistic children under 1 year old. Its findings suggest that coaching parents who have one autistic child to talk to their later babies could be beneficial, says lead investigator Meghan Swanson, assistant professor of psychology at the University of Texas at Dallas.

“Focusing on language skills is very important because of the cascading effect that language has on later development,” Swanson says.

The few interventions that exist for autistic children under 18 months tend to focus on social bonding. The new study shows it is possible to make a difference to language ability at a young age, says Steven Warren, professor of speech, language, and hearing sciences and disorders at the University of Kansas in Lawrence, who was not involved in the research.

“This is a really important study. I’d call it groundbreaking,” Warren says. “Many other studies have led up to this one, but I haven’t seen a study like this.”

Swanson’s team gave families of 96 babies a wearable audio recorder called LENA (Language Environment Analysis); 60 of the babies have an older sibling with autism, and 14 of these ‘baby sibs’ received autism diagnoses at 24 months.

The families used the device to record their conversation with the babies and the vocalizations the babies made over two days at ages 9 months and 15 months. The researchers then tested the children’s language skills at 24 months using the Mullen Scales of Early Learning, which also probe some nonverbal cognitive skills.

The team assessed two features in the recordings: the number of words the infants heard, and how often the babies had ‘conversational turns’ — instances in which they vocalized and a parent responded within five seconds, or vice versa.

The more words a baby hears and more conversational turns she has, the higher her language scores at age 2, the researchers found. This finding applies to both typical children and those with autism, they reported in June in Autism Research.

“Looking at these data for the first time, it was really striking to see how strong the associations were,” says Swanson.

The analysis also shows that typical babies hear fewer words at 15 months than at 9 months but have more conversational turns. That may be because older infants make more speech-related vocalizations than younger ones, eliciting more feedback from parents, the researchers say.

Autistic children also hear fewer words at 15 months, but they do not experience more conversational turns at that age than at 9 months. These children may produce fewer vocalizations than typical children do and respond less frequently to parents’ speech.

“When you have a kid who isn’t typically developing and who doesn’t give you the [social] cues back, it breaks the chain of that conversational duet,” says Kathy Hirsh-Pasek, professor of psychology at Temple University in Philadelphia, who was not involved in the study. The disrupted interactions may mean that autistic children get less practice with verbal interactions.

The study suggests that parents should persevere at conversing with their babies even when the babies don’t respond, Hirsh-Pasek says.

“Even if the kids aren’t giving us the kind of signals back to help us feel like we are part of the duet, somehow we have to intervene and create those duets anyway,” she says.

However, up to 30 percent of autistic children are nonverbal, and early language exposure probably won’t affect these children’s language skills because their difficulties have other causes, says Helen Tager-Flusberg, director of the Center for Autism Research Excellence at Boston University, who was not involved in the study.

Swanson plans to confirm the results in a larger group of babies. She is also checking the findings against brain imaging data to investigate how caregiver speech affects brain development and to determine the best time to begin to intervene.