An experimental drug that muffles the activity of neurons in the skin moderates heightened reactions to touch in six mouse models of autism, according to a study published today in Cell1. The drug also tempers anxiety and a few social difficulties in some of the mice.

The findings hint at a new strategy for treating autistic people who are highly reactive to touch. Unusual sensory responses are one of the core features of autism.

The results also suggest that sensory problems alter brain development and contribute to social difficulties. “This study is a technical tour de force,” says Mark Wallace, dean of the graduate school at Vanderbilt University in Nashville, Tennessee, who was not involved in the study. “Sensory symptoms are likely playing a bigger role in autism than we would have thought.”

However, although about 70 percent of autistic people have atypical responses to sensory stimuli, not all are unusually responsive to touch. That means drugs such as isoguvacine are unlikely to work for everyone.

“The key next step is to define which individuals with autism may most exhibit this [reactivity], and then focus on these individuals first in human trials,” says Craig Erickson, associate professor of psychiatry and behavioral neuroscience at Cincinnati Children’s Hospital Medical Center in Ohio, who was not involved in the work. 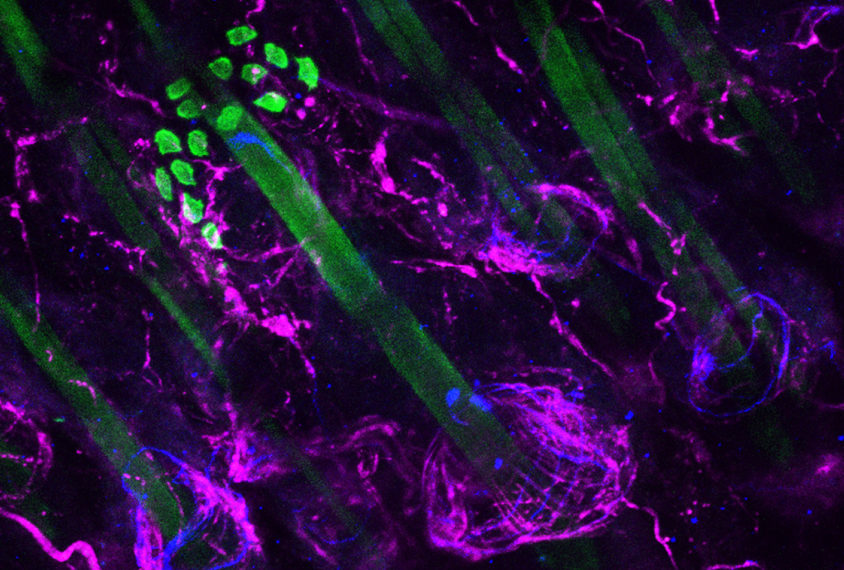 Touch neurons relay signals from the skin to the spinal cord and brain and are part of the peripheral nervous system. In 2016, Orefice and her colleagues reported that neurons for light touch are overactive in mice missing a copy of MECP2 or GABRB3, two genes linked to autism. The mutant mice’s neurons have too few receptors for a chemical messenger called gamma-aminobutyric acid (GABA), which dampens neuronal activity, the researchers found. Deficits in GABA signaling have been linked to autism.

As a result, the mice are unusually reactive to even the lightest puff of air on their fur. They are also anxious and generally do not prefer to interact with other mice over objects as controls do, or with an unfamiliar mouse over a familiar one.

In the new work, the researchers found the same tactile hyperreactivity, anxiety and social difficulties in mice missing a copy of SHANK3, another gene linked to autism, in their peripheral neurons. These behaviors arise for a different reason, however: Their touch neurons are overly excitable.

“These are three very different genes, with different functions, localizations and expression profiles,” Orefice says. “But [mutations in] all of them essentially lead to increased flow of information from the periphery to the spinal cord and brain.”

Similarly, the brains of the MECP2 and SHANK3 mice may compensate for this increased information flow in different ways, the researchers suggest. The two sets of mice show different alterations in neuronal number and activity.

“There are multiple ways to tone down the information coming into the cortex,” Orefice says. “We can find commonalities across the animal models, but we don’t expect the precise molecular mechanisms to be identical because the gene mutations are so different.”

The researchers tested several ways to dampen signals from sensory neurons to the brain.

First, they made mice that lack SHANK3 everywhere but in the peripheral neurons starting from conception. These mice respond normally to touch, have few social difficulties and are not anxious. The researchers found something similar for MECP2 and GABRB3 in their 2016 study. The results hint that normalizing the function of peripheral neurons might ease autism traits.

They also made mice in which they could reinstate a copy of MECP2 or SHANK3 in the peripheral neurons after birth. Restoring either gene in 28-day-old mice dampens their response to touch and some of their social difficulties, but not their anxiety. This suggests that there is a window early in life during which treatment might be more effective. 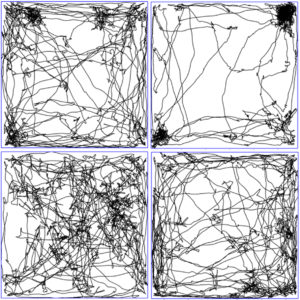 Finally, they tested isoguvacine, a drug that mimics GABA. They injected 6-week-old mice with a single dose of the drug and found that it eases reactions to touch in mice missing a copy of any of five genes — MECP2, SHANK3, GABRB3, CNTNAP2 or FMR1 — and in mice exposed in utero to an immune response.

“Despite the fact that these animal models have very different molecular mechanisms underlying their behavior, there is a common circuit,” says Camilla Bellone, assistant professor of basic neurosciences at the University of Geneva in Switzerland, who was not involved in the study. “It’s making me think in a different way about research on autism.”

The team gave daily doses of the drug to newborn mice missing a copy of MECP2 or SHANK3 everywhere. After 42 days, the treatment prevented sensory hyperreactivity, anxiety and some social difficulties.

The researchers next plan to explore how overactive touch neurons drive changes in the brain and in behavior.