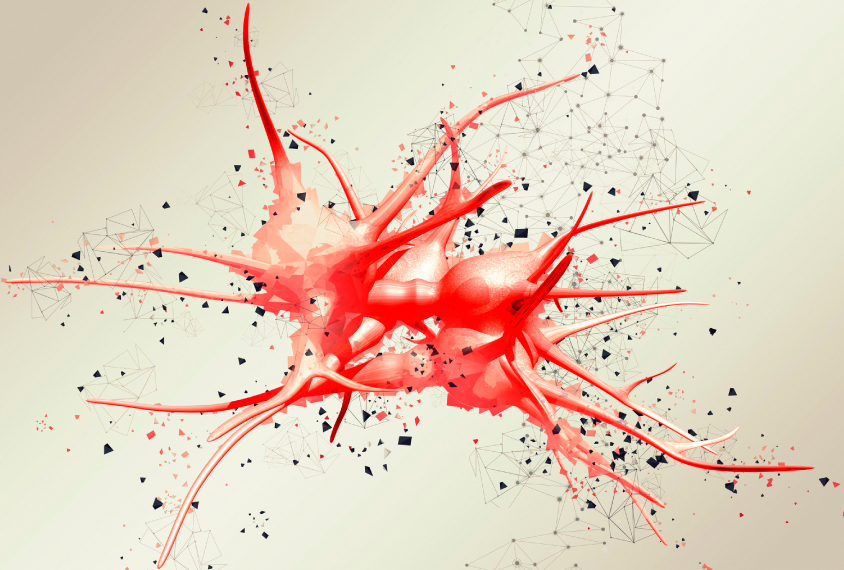 Critical cog: A new drug screen relies on the expression of a protein essential to neurons' functioning.

An experimental leukemia drug and a chemical in black pepper ease breathing and movement problems in a mouse model of Rett syndrome, according to a new study1.

Rett syndrome is a rare brain condition related to autism, caused by mutations in the MECP2 gene. Because the gene is located on the X chromosome, the syndrome occurs almost exclusively in girls. No drugs are available to treat Rett.

In the new study, the researchers developed a rapid drug screen and tested more than 900 chemicals. Many of these are approved by the U.S. Food and Drug Administration (FDA) or are in clinical trials for cancer or other conditions.

In 2016, the same team reported that neurons cultured from people with Rett, as well as the brains of mice with mutations in MECP2, have diminished expression of KCC2, another gene thought to be involved in the syndrome2. So, they looked for any drugs in their screen that increase KCC2’s expression.

The team tested two KCC2 boosters in mice lacking MECP2 — and found that both ease some Rett-like features in the mice.

“Our findings illustrate the power of an unbiased approach for discovering drugs that could significantly improve the treatment of Rett and other neurological diseases,” says Rudolf Jaenisch, lead researcher and founding member of the Whitehead Institute for Biomedical Research in Cambridge, Massachusetts. “Because we screened known and FDA-approved drugs, the path to clinical translation is likely to be shorter than with other non-approved compounds.”

Most approaches to treating Rett center around either replacing MECP2 or restoring its expression, but neither tactic is straightforward — motivating the search for other options.

KCC2 ferries electrically charged molecules in and out of neurons in the brain and spinal cord. This process calibrates neuronal activity and, when disrupted, may underlie various brain conditions. The gene has been tied to autism, epilepsy, schizophrenia and fragile X syndrome.

“Manipulating the expression of MECP2 has many hurdles, and having another target that shows promising preclinical data is exciting,” says Wendy Gold, head of molecular neurobiology at the Children’s Hospital at Westmead in Sydney, Australia, who was not involved in the work.

Jaenisch’s team inserted a gene for a fluorescent protein expressed along with KCC2 into human stem cells, providing a fast readout of KCC2 levels. They coaxed the cells to develop into neurons. And they deleted MECP2 in some of the neurons. These neurons are smaller and less mature than controls, and they signal poorly.

The team screened 929 compounds from three large drug libraries, including one focused on Rett therapies. They found 30 compounds that boost KCC2’s expression in the MECP2 neurons; 14 of these also increased the protein’s expression in control neurons.

“All of the identified compounds significantly boosted KCC2 gene expression,” says Xin Tang, study investigator and a postdoctoral fellow at the Institute.

Two of the compounds rescued signaling problems in the MECP2 neurons and normalized their size and maturity.

The team tested two of the identified compounds in mice with mutations in MECP2: KW-2449, which is a small molecule in clinical trials for leukemia, and piperine, an herbal supplement and component of black pepper. These mice have several traits reminiscent of Rett. They are prone to seizures, breathing problems, movement difficulties and disrupted social behavior.

Injecting the mice with either drug daily for two weeks improved the animals’ mobility relative to untreated mice. The drugs also eased the mice’s breathing problems, decreasing the frequency of pauses in breathing (apnea). The findings appeared in July in Science Translational Medicine.

The researchers assessed the drugs’ effect on only some of the mice’s traits, however. It is unclear, for instance, how the drugs might affect the animals’ lifespan, tremors or cognitive function.

The team also probed the biology of KW-2449. It is known to block FLT3, an enzyme in a molecular pathway implicated in blood cancers. Several of the compounds that boost KCC2 expression in the screen also inhibit this pathway. The new study is the first to indicate that this pathway is important in neurons.

“[The new work] is clever, comprehensive and covers a lot of basic biology,” says David Beversdorf, professor of radiology, neurology and psychology at the University of Missouri in Columbia. But he cautions that the compounds the study flags are far from ready for clinical use.

Still, Tang and his colleagues plan to test KW-2449 and other drugs in a mouse model of fragile X syndrome, another condition closely related to autism.