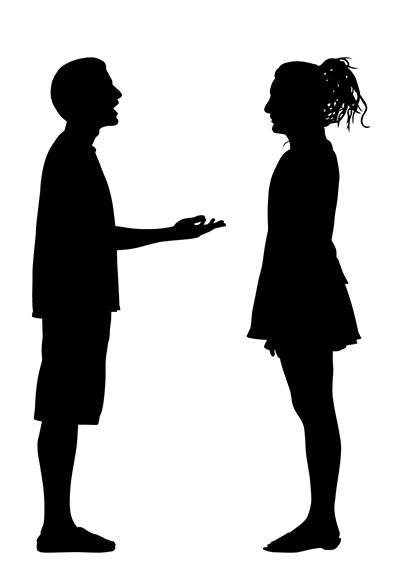 Leaning in: Propranolol may help people with autism improve their body language when they talk with other people.

The drug propranolol improves social behavior and cognition in teenagers and young adults with autism, suggest results from a small trial presented Sunday at the 2013 Society for Neuroscience annual meeting in San Diego.

At last year’s Society for Neuroscience annual meeting, David Beversdorf’s group at the University of Missouri, Columbia showed that propranolol enhances functional connectivity between certain brain regions and improves verbal fluency in people with autism. Another study published last year found that the drug improves memory and attention deficits in individuals with the disorder.

Both of these studies, however, are based on small numbers.

The new study tested the drug in 20 high-functioning people with autism who have intelligence quotients higher than 85. The individuals, 19 men and 1 woman, were between 15 and 31 years old.

The researchers recorded the participants’ heart rates and perspiration before the experiment to gauge their levels of anxiety and stress. They then gave ten of the participants a single dose of propranolol and the other ten a placebo. Neither the researchers nor the individuals knew who received which treatment.

After an hour, about the time it takes for propranolol to cross the blood-brain barrier, a researcher engaged the participants in one-on-one conversation and rated their sociability, including whether they stayed on topic and asked questions.

For the cognitive tests, the researchers measured verbal problem-solving by asking the participants to solve 20 anagrams, such as turning IRBCK into BRICK. They also asked the participants to memorize a list of 12 words and tested their memory of the list later.

They found that the participants who took propranolol earned better overall scores than people taking the placebo.

Compared with the placebo, propranolol also improves nonverbal behavior, such as whether a participant’s shoulders face another person during conversation and whether he leans in as he talks to someone.

Those who got propranolol also solved the anagrams faster than the controls, suggesting improvements in verbal problem-solving.

Interestingly, participants who had higher heart rate variability at the start of the two experiments benefited most from propranolol. It’s possible that the drug selectively helps people with autism who have high levels of stress or anxiety, Zamzow says.

“The hope is that they would come into a clinician’s office and maybe have their sympathetic activity measured before they’re even put on a drug that might not benefit them,” she says.

Correction: This article has been modified from the original. The previous version incorrectly stated that participants who had higher heart rate and perspiration (rather than higher heart rate variability) benefited most from propranolol.