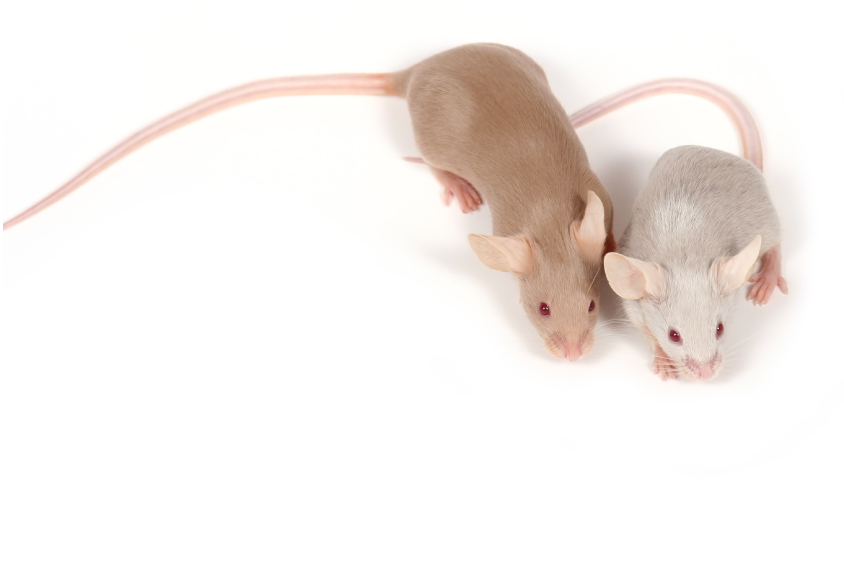 Friend request: Trouble in an oxytocin pathway may lead mice to be uninterested in new companions.

Mice missing the autism gene NLGN3 have altered social behaviors and brain responses to the hormone oxytocin, according to a new study1. A drug that helps regulate protein production improves both traits in the animals.

The compound belongs to a class of cancer treatments under development, called MAP kinase-interacting kinases. A similar drug has already proved largely safe in a clinical trial of healthy people2.

“This is not some dirty tool compound,” says lead investigator Peter Scheiffele, professor of cellular and developmental neurobiology at the Biozentrum of the University of Basel in Switzerland. “It’s a real drug that one could possibly issue and put in humans in a reasonable time.”

The treatment also improves cognition in a mouse model of fragile X syndrome, a condition that accounts for up to 5 percent of autism cases. Fragile X results from mutations in the gene FMR1.

The two genes have dissimilar functions: NLGN3 encodes the NLGN3 protein, a molecule that helps form and maintain the points of communication, or synapses, between neurons. FMR1 encodes a protein that binds RNA, a cell’s genetic instructions for making proteins via a process called translation.

The fact that the drug improves behaviors in such different mouse models suggests that a similar mechanism underlies multiple genetic causes of autism, Scheiffele says, and that mechanism may involve oxytocin.

Autism researchers have long been interested in oxytocin because of its role in social cognition. But they have not been able to establish a direct connection between the hormone and any known autism genes.

“None of [the genes] had anything to do with oxytocin, and it’s always been puzzling to align this,” Scheiffele says.

Scheiffele and his team used a common test to assess the social-recognition skills of mice missing NLGN3. Unlike controls, the knockout mice do not show increased interest in an unfamiliar mouse over one they have seen before. They do, however, show the typical preference for a novel object over a familiar one, indicating they have a neural difference specific to social behaviors.

Social recognition depends partly on the signaling of the chemical messenger dopamine in the ventral tegmental area, which is part of the brain’s reward system. When the researchers reintroduced NLGN3 into the dopamine neurons, the mutant mice performed better on the social-recognition task.

The researchers then recorded the activity of dopamine neurons in brain slices from the mice’s ventral tegmental area. They bathed the slices in oxytocin, known to at least partly control the function of dopamine neurons in social behavior. The hormone increased firing in the control mice’s neurons but not in those from the knockout mice.

The mice missing NLGN3 are not lacking in neurons that produce oxytocin, nor in receptors for the hormone. So to find out what else might explain the mice’s unusual oxytocin responses, the researchers used chemical tracers to look for differences in the production of proteins, which is known to alter neuron function. Neurons from the mutant mice had increased levels of translation, they found.

“There was no evidence before that [the NLGN3 protein] was coupled to pathways that regulate translation,” Scheiffele says. “So this was surprising.”

The team fed the mice the cancer drug, which is designed to inhibit an enzyme that regulates translation, and they found that the animals’ neurons began to respond normally to oxytocin, increasing their firing. The mice’s social behaviors also improved: They showed increased interest in new mice. By contrast, the inhibitor had no effect on the control mice. The findings were published earlier this month in Nature.

That this drug improved behaviors in fragile X mice made sense: FMR1’s main function is to regulate translation. But neuroligins would not have been expected to play such a role, says Linmarie Sikich, associate director of the Duke Center for Autism and Brain Development in Durham, North Carolina, who was not involved in the work. The study demonstrates the importance of looking at unexpected roles of different genes, she says.

“What’s interesting about this is people have never put neuroligin into that class,” Sikich says. “What is really the example they’re showing here is: If we try to look more at different kinds of functions where we might not expect this particular gene to have as marked a role, do we see that it intersects in other areas too?”

The fact that the study unexpectedly implicates oxytocin in a new genetic model supports the idea that this hormone plays a role in at least a subset of autistic people, says Jeremy Veenstra-VanderWeele, professor of psychiatry at Columbia University, who was not involved in the work.

“It’s reasonable to think about the oxytocin system as a more general target for social function or for autism-related social impairment, and that’s exciting,” Veenstra-VanderWeele says.

The study doesn’t completely map out the neural pathway from oxytocin signaling through protein translation to social behavior, he says, but that may not be necessary for developing successful treatments in people.

“If our hope is to have ideas on autism therapeutics, you don’t have to know every single step,” Veenstra-VanderWeele says. “Being able to show a particular compound actually rescues social recognition is pretty powerful.”

The mechanism may relate to other genetic contributors to autism, such as mutations in the genes TSC2 or PTEN, that are known to have disrupted translation, he says.

Although the findings are encouraging, it’s important to remember that other treatments that have worked in mice have failed in people, including those for fragile X, Sikich says. To see if the findings generalize, researchers should test the drug in other mouse models, such as those missing the autism gene CNTNAP2, she says.

Previous work has shown that those mice have unusually low levels of oxytocin and few neurons that respond to the hormone; treating them with oxytocin increases their social behaviors3.

Scheiffele’s team plans to test other mouse models of autism to see if the drug has a similar effect, and to continue studies to ready the inhibitor for clinical trials in people.