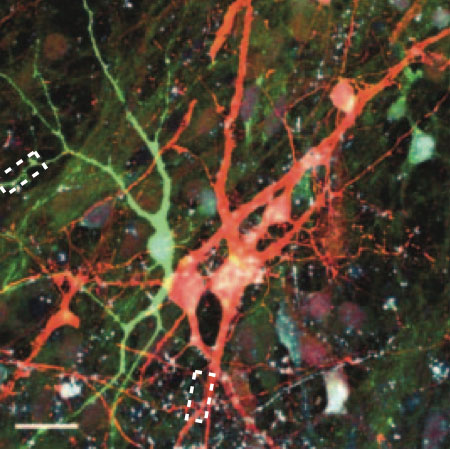 A new stem-cell model of Phelan-McDermid syndrome points to a possible treatment for the rare autism-related disorder, according to a study published 16 October in Nature1.

Phelan-McDermid syndrome is characterized by intellectual disability, autism, seizures, sleep trouble and motor problems. It is caused by glitches in the 22q13 chromosomal region, which includes SHANK3, a well-known autism candidate gene.

Several mouse models lacking SHANK3 have shown relatively subtle abnormalities, however. Each of these models has a different set of brain and behavioral defects, which researchers are only beginning to understand.

“We like mice, and we think they provide interesting insights into disease, but at the same time, we know that they are not always really great predictors of the human disease,” says Ricardo Dolmetsch, global head of neuroscience at the Novartis Institutes for Biomedical Research in Cambridge, Massachusetts. “In the case of Phelan-McDermid, that’s definitely true.”

Dolmetsch and his colleagues used chemical soups to turn skin cells from individuals with Phelan-McDermid syndrome into neurons. Compared with controls, these neurons have fewer synapses, or junctions between neurons, and dampened transmission of electrical messages between them, the study found.

When the abnormal cells are exposed to a hormone called insulin-like growth factor 1 (IGF1), however, their synaptic signaling is restored to normal levels.

The results agree with those from a previous study reporting that IGF1 improves symptoms in mice lacking SHANK3. They also lend support to a small clinical trial testing IGF1 on children with Phelan-McDermid syndrome.

“I’m optimistic, but I don’t know if IGF1 is going to be the answer,” says Catalina Betancur, director of research at the Pathophysiology of Central Nervous System Disorders unit at INSERM in Paris, who was not involved in the study.

What she’s more optimistic about, she adds, is that the new cellular model of Phelan-McDermid syndrome will allow researchers to screen many more drugs.

“The promise of being able to screen a lot of pharmacological compounds to identify a potential treatment is a huge thing,” Betancur says. “So there is hope, where a few years ago there was absolutely none.”

The researchers grew these abnormal neurons with control cells in the same culture dish, and used fluorescent labels to distinguish one set from the other.

The researchers tried two ways to rescue these defects. First, they used a virus to deliver SHANK3 to the cells, which effectively reversed the synaptic deficits. This is an important finding because SHANK3 is just one of about 25 genes in the Phelan-McDermid region, and researchers have debated whether other genes are also key players in the syndrome.

“It’s great to be able to demonstrate that all the synaptic deficits that we’re seeing in those cells are in fact due to SHANK3,” Betancur says.

The second rescue method used IGF1. Before this study, researchers had assumed that IGF1 works by boosting SHANK3 expression at synapses. But Dolmetsch’s team found exactly the opposite: IGF1 dramatically suppresses the expression of SHANK3 in both the Phelan-McDermid neurons and controls.

“We were very puzzled by this,” Dolmetsch says. “It eliminates expression of SHANK3, and yet at the same time it’s rescuing synaptic transmission. How can that be?”

In mice, most synapses express SHANK3 and its sister proteins, SHANK1 and SHANK2. But Dolmetsch’s team discovered that’s not the case in people.

Looking in samples of human fetal brain tissue, the researchers found that some synapses have SHANK3 protein and others have SHANK1 and SHANK2. “It turns out that these SHANK3-containing synapses seem to be less mature,” Dolmetsch says.

“It’s striking, and quite paradoxical” that IGF1 lowers the expression of SHANK3, says Thomas Bourgeron, director of the Human Genetics and Cognitive Functions Unit at the Institut Pasteur in Paris, who was not involved in the study. “It leaves more questions than answers, but I think this paper is a very good starting point.”

Dolmetsch began his iPS studies about six years ago, when the technology was in its infancy. Since then he has collected skin samples from about 60 individuals with Phelan-McDermid syndrome, he says, and will use them to try to replicate the findings from this study.

His team has reprogrammed cells from individuals with other rare types of autism, including Timothy syndrome, DiGeorge syndrome, Dravet syndrome and deletions of chromosomal region 16p11.2. “We’re very interested in doing drug screening in a very serious way,” he says.

Bourgeron and his colleagues have also made iPS neurons from four people who carry SHANK3 mutations.

Bourgeron says he is optimistic about finding treatments with this approach because these individuals still have one working copy of the gene. “If we could just find a molecule that boosts a little bit this good copy, maybe we could restore some function,” he says.