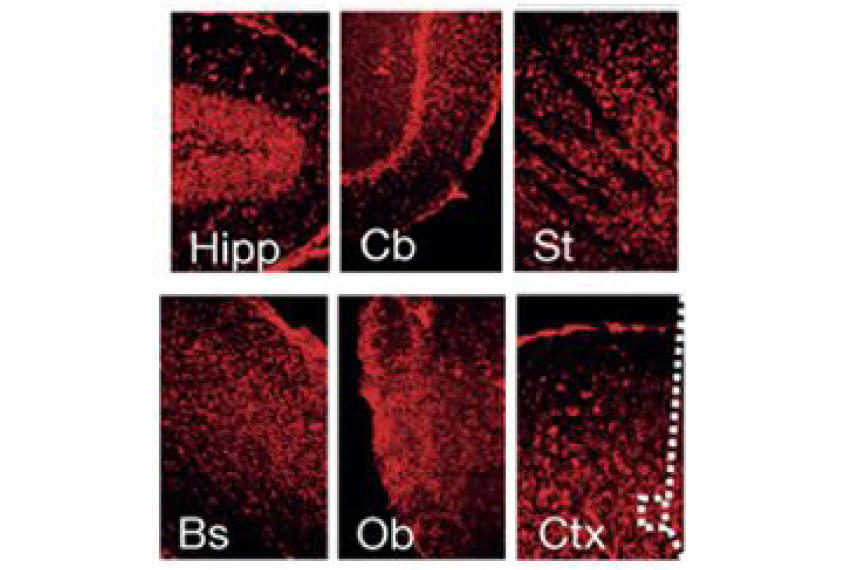 Special delivery: Tiny snippets of RNA injected into the brain can spread to multiple regions.

An experimental drug tamps down the expression of MECP2, the gene that’s duplicated in an autism-related condition, and restores typical behavior in mice.

The findings suggest that the therapy might also work for children with MECP2 duplication syndrome, which is characterized by autism, movement problems and seizures.

At least in mice, the drugs appears to be completely safe, says Yingyao Shao, a graduate student in Huda Zoghbi’s lab at Baylor College of Medicine in Houston, Texas. “Even with the highest dose, the mice still do fine.”

Shao presented the unpublished findings yesterday at the 2019 Society for Neuroscience annual meeting in Chicago, Illinois.

The drug is made up of small pieces of RNA called antisense molecules that decrease expression of the human MECP2 gene. Researchers first tested the drug in a 2015 study involving male mice equipped with a copy of the human gene in addition to the mouse version. The trial showed that the drug silences the human copy and reverses the mice’s behaviors.

But that study left open the possibility that too much of the drug — and too much suppression of MECP2 — could be harmful. (Mutations that cause a loss of MECP2 result in Rett syndrome, which has many of the same traits as MECP2 duplication syndrome.) The mice in the 2015 study were protected from this possibility because the mouse version of the gene is impervious to the treatment.

In the new work, the researchers bred mice with two copies of the human gene and no mouse copies, mimicking the situation seen in people with the duplication syndrome. These mice are anxious and less active than is typical, and have problems with motor skills and learning and memory.

The researchers also tested a more realistic delivery method. In the previous work they delivered the drug continuously through a pump into the brain, but this time they gave the mice a single injection into one of the brain’s fluid-filled spaces, or ventricles.

The drug spreads throughout the brain to multiple regions, and within two weeks it returns MECP2 protein levels to roughly the same as those seen in controls. The mice show few problems with movement, learning and memory or activity levels 10 weeks after treatment.

Shao says the team is searching for a blood-based marker that would reflect MECP2 levels in the brain and provide a less invasive way to monitor the treatment’s effectiveness.