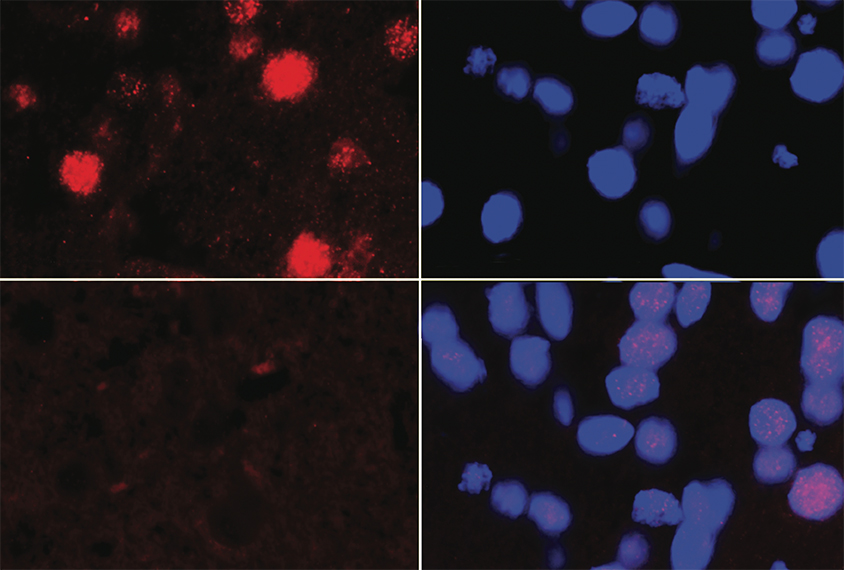 Placental peptide: The newly discovered gene, NHIP, encodes a peptide in neurons and appears to be underactive in placentas from births of autistic children.

A gene not previously linked to autism alters the expression of other genes associated with the condition, according to a new analysis of DNA in the placenta.

A placenta’s genome comes from the fetus and has a unique pattern of methylation, the suite of chemical tags called methyl groups that attach to DNA to regulate gene expression. The pattern may reflect brain development and a child’s chances of having autism, some research shows.

The findings, along with previous work on the placental methylome, show that the organ may “mirror” methylation patterns and gene expression levels in the fetal brain, says lead investigator Janine LaSalle, professor of medical microbiology and immunology at the University of California, Davis.

“We don’t exactly know why that is,” La Salle says. “But it’s exciting in that the placenta could be a good surrogate for what happened in the brain during development.”

The study demonstrates the importance of studying the oft-ignored placenta to understand brain development, says Anna Penn, associate professor of pediatrics at Columbia University, who was not involved in the work.

“If we’re going to understand diseases that we have identified as potentially having an origin in fetal development, we can’t continue to ignore the role of the placenta,” says Penn, who coined the term ‘neuroplacentology’ to describe the study of the placenta’s effects on fetal brain development. “Maybe someday we’ll respect the placenta enough not to throw it away.”

LaSalle’s team identified 134 genomic regions spanning 183 genes — many of which are linked to autism — that show different methylation patterns in autistic versus non-autistic children. Twelve of the regions, all with unusually low methylation levels, are located in 22q13.33. Though this stretch of chromosome 22 has not been previously associated with autism, it neighbors 22q13.3, home to SHANK3 and multiple other genes connected to autism, intellectual disability or neuropsychiatric conditions.

“Knowing more about what may be happening in this region will be potentially a further step for the autism field,” says study investigator Yihui Zhu, an applied bioinformatics scientist at 10x Genomics in Pleasanton, California, who completed the study as part of her doctoral research in LaSalle’s lab.

The region contains no previously identified genes, but one sequence encodes a peptide expressed in the brain, placenta and ovaries, the team found. The gene’s expression increases after neurons mature and in response to oxidative stress, cells derived from embryonic brain tissue revealed. The researchers named the gene neuronal hypoxia inducible, placenta associated, or NHIP.

The findings were published in Genome Biology in February.

A common structural variant in 22q13.33 occurs more often in autistic than in non-autistic children’s placentas, the team found. A similar trend emerged from an analysis of postmortem cortical brain samples from 27 autistic and 30 non-autistic children and adults. Brain samples with altered NHIP expression also showed expression differences in more than 500 genes, including low levels of CHD8, one of the genes most strongly linked to autism.

For 77 of the placentas, LaSalle’s team had data on the women’s use of prenatal vitamins, which contribute molecules needed for methylation. Those who reported taking vitamins in the first month of pregnancy delivered placentas with higher levels of methylation in 22q13.33 than those who did not.

Large studies could probe whether carriers of the structural variant should take even higher doses of prenatal vitamins than what is currently recommended, Zhu says.

The findings demonstrate how genes and the environment can both contribute to autism, says Magdalena Janecka, assistant professor of psychiatry at the Icahn School of Medicine at Mount Sinai in New York City, who was not involved in the work.

“You have genetic and environmental factors that converge on the same biological processes,” Janecka says. “I think that’s really cool.”

The sample is size is small, Penn says, though studies of placentas don’t tend to get much bigger. The researchers’ “sophisticated,” multi-step approach lends weight to the findings, she says.

The use of techniques to sequence methylation across the entire genome, rather than only certain areas, also helps, Janecka says. “It’s a very elegant study.”

LaSalle says she next plans to more fully characterize NHIP’s function and determine if the NHIP peptide could be used therapeutically.