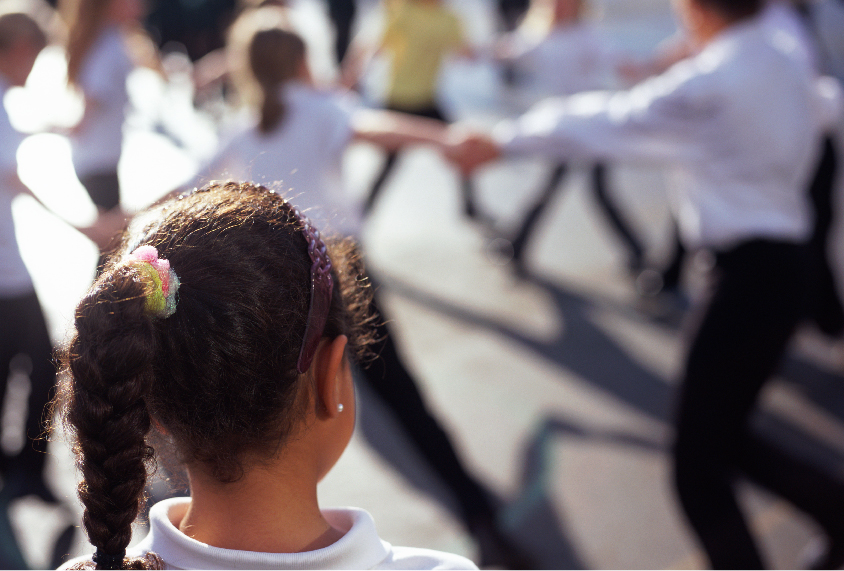 Standing apart:
Children with a deletion on chromosome 3 often want to connect with others but may lack the skills to do so. Peter Cade / Getty Images

The loss of 21 genes on chromosome 3 substantially raises the risk of autism, a new study suggests1.

The so-called 3q29 deletion increases schizophrenia risk by as much as 40-fold, but also appears to increase the risk of autism by 16-fold in males and 34-fold in females.

The deletion is associated with some social problems — but not reduced social motivation — as well as repetitive behaviors and restricted interests even among people who do not have autism. The research is based on data from 93 people with the variant, the largest such group studied so far.

“The 10,000-foot view from our paper is that the 3q29 deletion comes with social disability — a spectrum of social disability that sometimes is severe enough to be called autism,” says lead researcher Jennifer Mulle, associate professor of human genetics at Emory University in Atlanta. “But it’s a really unique profile of autism or social disability.”

Several case reports and genetic studies have linked the deletion to autism2. But because the deletion is rare, occurring in only about 1 in every 30,000 people, it has been difficult to nail down its connection to the condition.

“The autism association lacked enough power to really get a sense of whether there was an increased risk,” says Julian Martinez-Agosto, associate professor of human genetics at the University of California, Los Angeles, who was not involved in the study. “And that’s what this paper shows, and why I think it’s essential.”

Mulle and her colleagues studied 93 people enrolled in a 3q29 deletion registry, which Mulle created in 2013. They analyzed medical questionnaires that the carriers or their parents completed when they enrolled in the registry.

This difference in the ratio suggests that the deletion shrinks the sex bias typically seen in autism. One explanation for the sex bias is that girls are somehow protected from autism and so need a much bigger genetic hit than boys do to have the condition.

“What our data imply is that the effect of 3q29 deletion on social disability, whatever that biological effect is, it’s so big that it’s partially overcoming the protective effect that exists in females,” Mulle says. The findings appeared in July in Molecular Autism.

In April, Mulle and her colleagues reported other sex differences in a mouse model of the deletion3. Female mice with the deletion are hypersensitive to sound, whereas males show problems with social interaction and spatial memory, for example. Mice of both sexes tend to be small.

In the new study, Mulle’s team also gave standard autism screening questionnaires to subsets of participants, including many who do not have autism diagnoses, or to their parents.

The deletion carriers have more autism traits than neurotypical participants, the questionnaires suggest. Their restricted interests and repetitive behaviors are particularly severe; their social cognition, communication and interaction are moderately impaired.

However, their social motivation is only mildly affected. “That’s something we see when we interact with the kids directly,” Mulle says. “They really want to talk to you, they want to have peer relationships, they want to connect with you.”

This is different from what is seen in most autistic children without the deletion: Their level of social motivation tends to match other aspects of their social functioning.

Still, because the results are based on parent reports and self-reports, they need to be interpreted with caution, says Merlin Butler, a professor of psychiatry and pediatrics at the University of Kansas, who was not involved in the research. And describing the traits associated with the deletion is just the beginning, he says: “The next question is why.”

Mulle and her colleagues are trying to answer that question by teasing out which genes within the deleted segment underlie the behavioral differences. They are also conducting detailed, in-person evaluations of children with the deletion to learn more about the syndrome.

Meanwhile, Mulle suggests that clinicians routinely screen all children with a 3q29 deletion for autism.