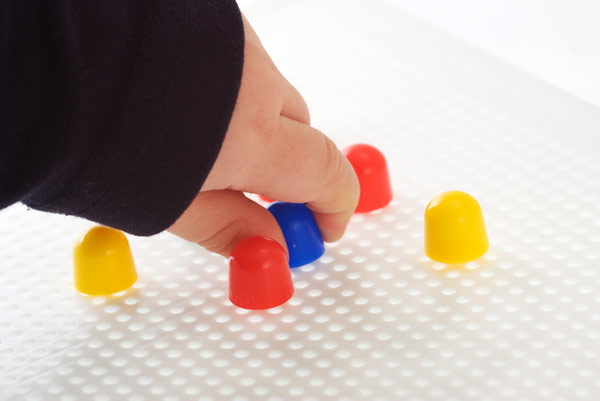 Jovan Nikolic/Shutterstock.com Motor measure: People with autism-linked glitches on chromosome 1 have difficulty placing pegs in a board.

The first in-depth look at people with alterations in the 1q21.1 chromosomal region reveals a range of features, from problems with fine motor skills to autism, according to a study published 11 June in Genetics in Medicine1.

A prior study published in 2008 found that duplications of this region lead to enlarged head size, and deletions produce the opposite pattern. The study also showed that individuals with either the duplication or the deletion tend to have developmental delay and neuropsychiatric symptoms such as attention deficit2.

The new analysis offers a clearer picture of features associated with these chromosome changes based on a detailed evaluation of 19 people with the deletion and 19 with the duplication.

This study is the latest example of a ‘genetics first’ approach, in which scientists study subgroups of people with autism who share a mutation. But unlike other autism-linked mutations that lead to a consistent pattern of features, alterations in 1q21.1 seem to have diverse effects.

“I kind of expected that we would see a pattern emerge,” says lead researcher Raphael Bernier, associate professor of psychiatry at the University of Washington in Seattle. He and his team identified a few key features of people with the copy number variation (CNV), but in general people with duplications or deletions of 1q21.1 do not present an identifiable “clinical picture.”

The lack of predictability shows that parsing autism’s genetic complexity may require delving even deeper into subgroups with the same mutation, says Thomas Frazier, director of the Cleveland Clinic’s Center for Autism.

“The article struck me by emphasizing how deep a dive we have to take into these subgroups to truly understand them,” says Frazier, who was not involved with the study. “This will take lots of work.”

For each individual in the study and any unaffected parents, Bernier and his colleagues took a medical history and conducted psychiatric, neurological and motor assessments over several days.

Of the 19 people with 1q21.1 duplications, 5 have autism. The same is true for 2 of the people with the deletion. The most common feature is fine motor deficits, which are present in some form in all of the individuals. For example, these people take longer than average to insert small pegs into a pegboard. They also tend to have trouble understanding and articulating words.

Comparing individuals with their unaffected parents revealed shifts in abilities in families even when no disability is present. “We actually look at what someone’s degree of challenge is,” Bernier says.

For example, only five of the people with 1q21.1 duplications have intelligence quotients (IQs) low enough to qualify as having an intellectual disability. But the group has an average IQ nearly two standard deviations lower than that of their parents.

The study comes on the heels of a similar massive effort by Bernier and his colleagues to characterize the effects of alterations in another chromosomal region, 16p11.2. People with deletions of this region tend to have large heads, obesity and language problems3. Roughly 20 percent of them have autism.

The new work reveals some interesting differences in autism symptoms between these two autism-linked CNVs. Those with 1q21.1 duplications and autism tend to have “classic” social deficits, Bernier says, meaning they’re uninterested in social interaction. By contrast, those with 16p11.2 CNVs and autism look like they want to interact but don’t know how.

The analysis of those with 1q21.1 CNVs also confirms previous findings of head size: Five individuals with duplications have above-average head size, whereas four people with deletions have relatively small heads.

Understanding how different CNVs lead to such variable symptoms is the next big challenge, says Helen Tager-Flusberg, professor of psychological and brain sciences as Boston University, who was not involved in the study.

“We all thought that if we took this gene-first approach, it was going to clear things up and we’d be able to parse the heterogeneity,” says Tager-Flusberg. “I think the answer is that perhaps in some cases we will, but in other cases we won’t.”