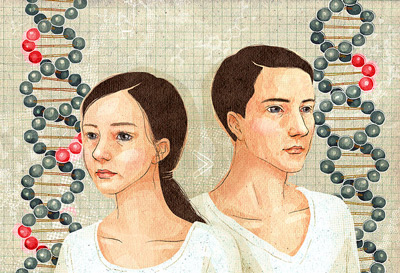 Julia Yellow Brain protection: Some brain regions that distinguish girls with autism may be linked to their ability to compensate for their problems.

Male and female preschoolers with autism have distinct sets of brain regions that distinguish them from typically developing controls, according to unpublished research presented Saturday at the 2014 International Meeting for Autism Research in Atlanta.

The findings suggest that differences in brain structure may underlie autism’s gender bias. The disorder is four times more common in males than it is in females. Girls with autism tend to have more autism-linked mutations than do boys with the disorder. This has led some researchers to suggest that girls are somehow protected from autism, and need a heavier mutational burden than boys do to develop the disorder.

The data presented Saturday suggest that part of this protection may originate from differences in brain structure. Some of the brain regions that differ between girls with autism and female controls also generally distinguish typical girls from typical boys. These changes to ‘female’ brain regions also seem to track with the ability to adapt in girls with autism.

“These regions may not be associated with autism severity, but rather with some compensatory or adaptive function,” says Christine Nordahl, assistant professor of psychiatry at the University of California, Davis MIND Institute, who presented the results.

Nordahl and her colleagues scanned the brains of 22 girls with autism and 27 age-matched female controls, as well as 134 boys with autism and 54 male controls. The researchers scanned the children while they slept to assess their brain structures. The children were all about 3 years of age and have similar intelligence quotients and autism severity.

The researchers divided the cortex — the outer layer of the brain, responsible for most higher-order functions — into 68 regions. They looked for differences in the size of these regions between the groups.

In girls, changes to the volume of the left superior temporal gyrus — a region critical for language processing — are associated with greater autism severity. In boys, this is true for the left anterior cingulate, which has been linked to empathy and emotion.

Although the results are preliminary, the researchers hypothesize that the brains of girls with autism show evidence of compensatory mechanisms. Nordahl says she aims to recruit at least 90 more girls to balance the number of males and females in the study.