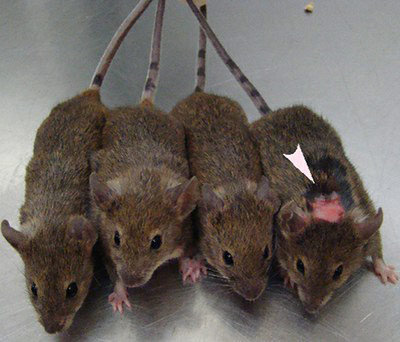 Mice that have an excess of the Rett syndrome protein MeCP2 have biochemical and neuronal characteristics that are strikingly similar to those of mice that completely lack the protein, according to unpublished research described Sunday at the 2011 Society for Neuroscience annual meeting in Washington, D.C.

Mice lacking the MeCP2 protein mimic the symptoms of Rett syndrome, the autism-related disorder. By contrast, those with excess MeCP2 model a rare human disorder in which the MeCP2 gene is duplicated.

“This might explain some of the overlap in symptoms,” says lead investigator Huda Zoghbi, director of the Neurological Research Institute at Baylor College of Medicine in Houston.

“The clinical phenotype in the mice starts the opposite but then becomes similar,” Zoghbi says. “But gene expression is always opposite.”

By reducing the levels of certain molecules affected by MeCP2, the researchers have been able to alleviate anxious behavior in mice that have excess MeCP2. “Restoring gene expression levels, even pharmacologically, mitigates disease phenotypes,” Zoghbi says. Some of this work is in press.

Last year, Zoghbi’s team debuted a mouse model that lacks MeCP2 only in neurons that produce the neurotransmitter gamma-aminobutyric acid2. This work is part of a larger effort to create mouse models lacking MeCP2 in different subsets of neurons.

“The idea of analyzing specific neuronal populations with known functions is wonderfully appealing,” says Emanuel DiCicco-Bloom, professor of neuroscience and cell biology at Robert Wood Johnson Medical School in New Jersey, who is not involved in the work.

Zoghbi’s team has created another mouse that lacks MeCP2 only in cholinergic neurons, which produce the neurotransmitter acetylcholine. These mice have difficulties with learning and memory.

The researchers have preliminary data suggesting that drugs that boost the function of cholinergic neurons improve these symptoms. Zoghbi’s team plans to investigate these and other drugs in mouse models of Rett syndrome.