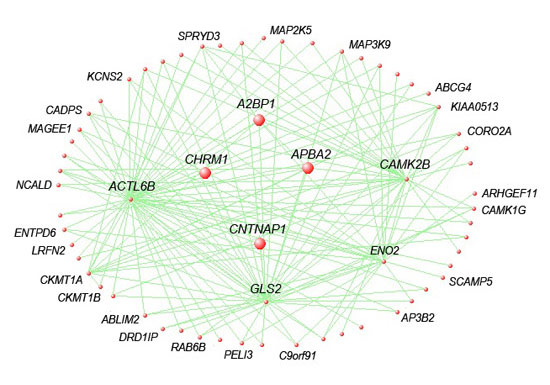 Matching modules: Autism associated with a 15q11-13 duplication has the same gene network defects seen in common forms of the disorder.

A rare form of autism linked to a duplication of the 15q11-13 chromosomal region shares a molecular signature with more common forms of the disorder. Researchers presented the unpublished results yesterday at the 2014 Society for Neuroscience annual meeting in Washington, D.C.

The finding is intriguing, as it suggests that autism linked to a single genetic defect shares molecular underpinnings with more complex forms of the disorder.

In 2011, Daniel Geschwind and his team analyzed 36postmortem brains andshowed that genes in the cortex cluster into 18 networks, or ‘modules,’ with similar functions and expression patterns in the brain. Two of these modules are altered in autism.

In the new study, Geschwind’s team looked at patterns of gene expression in postmortem brains from 16 adults with idiopathic autism — meaning autism of unknown cause — and 8 with autism and 15q11-13 duplications.

The brains of the people with idiopathic autism express lower levels of genes that play a role at neuronal junctions, or synapses, and higher levels of those involved in inflammation, compared with controls. Strikingly, the brains of people with 15q duplications show the same trends — only exaggerated.

“It’s kind of remarkable,” Geschwind, distinguished professor of neurology, psychiatry and human genetics at the University of California, Los Angeles, said when presenting the results. “This is showing that a single gene disorder has the same pattern [as idiopathic forms of autism].”

Of the candidates identified, 26 are ‘double hits’ seen in both studies, and 12 cluster in the two modules altered in autism.

“The proof is in the replication,” Geschwind said of the exome studies confirming his 2011 findings. “Although autism is very heterogeneous, we can capitalize on these findings to identify common molecular pathways.”

The researchers speculate that autism stems from inherited genetic defects that cause dysfunctional synapses. The brain tries to correct the synaptic dysfunction, but this sets off an inflammatory response resulting in fewer active synapses. This could explain the imbalance between excitatory and inhibitory signaling seen in autism.