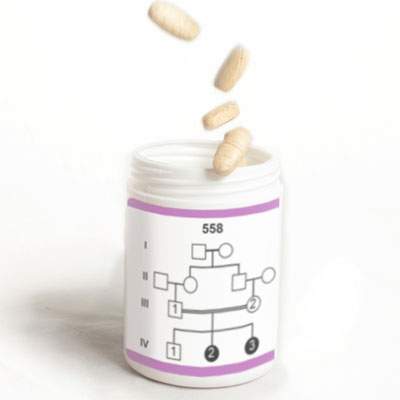 Simple source: By studying families in which the parents are related, researchers have found an inherited form of autism that might be treatable.

Simple source: By studying families in which the parents are related, researchers have found an inherited form of autism that might be treatable.

Researchers have uncovered a rare, genetic form of autism caused by mutations that speed up the breakdown of certain amino acids. The findings, published 6 September in Science,suggest that nutritional supplements may alleviate symptoms of the disorder in people with these mutations1.

The mutations are in a gene called branched-chain ketoacid dehydrogenase kinase (BCKDK), which produces an enzyme of the same name. The enzyme inactivates the molecular machinery that typically breaks down branched-chain amino acids, a set of molecules that are essential for building proteins.

Mutant mice lacking the gene show symptoms similar to those seen in people with this rare form of autism — seizures and low levels of these amino acids in the blood. Feeding the animals a diet high in the amino acids reverses the symptoms within a week.

“As far as I know, this is the first example of a form of autism where there is a personalized treatment,” says lead investigator Joseph Gleeson, professor of neurosciences at the University of California, San Diego. “It [is] remarkable.”

Given the dearth of treatment options for autism — the only two drugs approved for the disorder are for irritability — the possibility of a simple treatment is significant.

“It’s exciting because this type of autism, at least, might be treatable with a metabolic intervention,” says Valerie Hu, professor of biochemistry and molecular biology at George Washington University in Washington, D.C., who was not involved in the study.

Mutations in BCKDK are rare — identified in just three families to date — so it’s unclear whether the results are relevant to other forms of autism. But the study adds to other evidence linking metabolic issues to the disorder.

Research published in May suggests that a genetic defect in the synthesis of carnitine, a molecule that plays a central role in the body’s ability to make energy, might slightly increase the risk of autism.

“These are both inborn errors of metabolism that are linked to autism, which had not yet been identified because they don’t jump out on standard metabolic tests,” says Arthur Beaudet, professor of human and molecular genetics at Baylor College of Medicine in Houston, Texas, who led the carnitine research. “In both cases, there is concern about whether certain nutrients reaching the brain might be part of the problem.”

Gleeson and his collaborators identified mutations in this enzyme in two families, each with two children who have both autism and epilepsy. Both families are consanguineous, meaning the parents are related. The researchers found just one additional case of the disorder after searching their database of genomic data from consanguineous families.

It’s not yet clear how lack of these molecules leads to autism symptoms. But researchers speculate that the root cause lies in their transport into the brain.

Analysis of brain tissue from mutant mice supports this idea. These mice have lower concentrations of the branched-chain amino acids and higher levels of other amino acids in their brains than controls do. Either of these anomalies might cause seizures and autism, the researchers say.

The mutations don’t seem to affect neuronal shape or activity, however, suggesting that the mechanism at work is outside the neuron. “Our view is that the neurons are innocent bystanders,” says Gleeson.

Though mutations in BCKDK appear to be rare, it’s possible that mutations in other molecules involved in the metabolism or transport of branched-chain amino acids might have a similar effect.

For example, Hu’s research shows that expression of BCAT, a gene that encodes an enzyme that can either synthesize or break down branched-chain amino acids, is elevated in cell lines created from people who have a similar profile of epilepsy, autism and language impairment.

“Maybe the elevated expression is a compensatory mechanism to try to replenish some of the branched-chain amino acids,” she says.

The findings speak to the value of looking at genes that aren’t directly linked to neuronal function but still affect the brain, Hu says.

They also suggest a means of preventing this rare disorder, notes Beaudet. “One would like to identify children like this before they become symptomatic, with the idea that dietary intervention would prevent the disorder.”