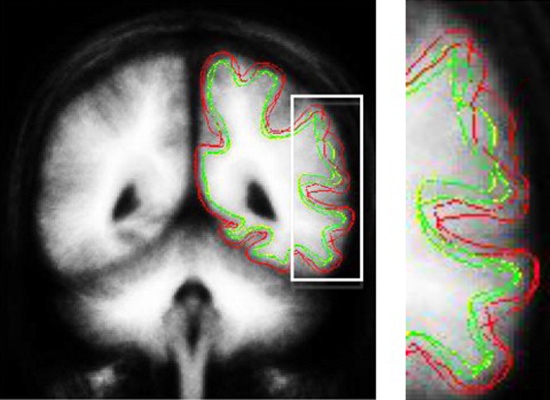 Etch a Sketch: New pattern-recognition technology reveals subtle differences in the size and shape of gray matter in people with autism (red) compared with controls (green).

An imaging study widely interpreted as heralding a diagnostic brain scan for autism is more preliminary than popular media reports would indicate, according to experts familiar with the work.

The paper, published 10 August in the Journal of Neuroscience, created a buzz even before it was available on the journal’s website. Multiple media reports claimed that a magnetic resonance imaging (MRI) scan would be able to diagnose autism with 90 percent accuracy1.

But these reports miss the mark, says Uta Frith, emeritus professor of cognitive development at the University College London Institute of Cognitive Neuroscience.

“I am a bit skeptical about the exaggerated claims that are being made in press releases about the imminent possibility of diagnostic brain scans,” Frith says.

Still, the study offers preliminary proof that structural features of the brain specific to autism may one day be used to design a diagnostic test to replace, or supplement, behavioral tests. “I believe that this will eventually be possible and I look forward to it, but a lot of work needs to be done first,” Frith says.

The work also reaffirms the potential of imaging studies to fuel research into the causes of autism and related disorders. By identifying brain features that may be linked to specific genes or pathways, studies like this one can turn up provocative leads and uncover previously unsuspected connections.

Several research groups have identified abnormalities in various brain structures and regions in people with autism. Studies have shown, for instance, that people with autism have larger head size and irregularities in the surface of the cortex, the gray matter of the brain that plays a critical role in language, memory and attention.

But the ability to diagnose autism using a brain scan has been held up by the lack of consistent, replicated biomarkers for the disorder.

“Autism is associated with a variety of complex, interacting, pathologies, which don’t affect just one aspect of brain anatomy,” notes lead investigator Christine Ecker, lecturer in forensic and neurodevelopmental sciences at King’s College Institute of Psychiatry in London.

She and her team used MRI to scan the brains of 20 adults with autism, 19 with attention deficit hyperactivity disorder (ADHD) and 20 healthy controls. They then used a new tool — the Support Vector Machine (SVM) — to analyze the scans.

SVM is an emerging pattern-recognition technique that can be used to classify data by differentiating between two or more classes, “for example between those with a particular disorder and controls,” says Ecker. The technique has been used for automated recognition of speech, handwritten postal codes and images of human faces, but her group is the first to use the technology to study autism.

Using SVM to simultaneously analyze imaging data on the thickness and volume of brain regions known to be implicated in autism, Ecker’s team was able to chart and compare five specific anatomical parameters. The researchers then sorted these parameters to arrive at a binary classification: does the individual have autism, or not?

Comparing the scans of individuals with autism to those with ADHD as well to healthy controls is a key feature of the study, Ecker says. “We had to make sure that what we were finding was not simply arising due to a non-specific effect of having a neurodevelopmental disorder in general, but is driven by autism-related differences in brain anatomy.”

Based on their results, the researchers conclude in the paper that their study “offers a ‘proof of concept’ for describing the complex multidimensional gray matter differences” in people with autism.

So far, Ecker and colleagues have looked only at adult men diagnosed with autism, but they plan to scan children, and adults with either high-functioning autism or Asperger syndrome.

The study confirms that the brains of people with autism have distinct abnormalities, notes Frith, adding that “it is not at all surprising, but completely expected.” But more to the point, she says, the scans cannot reveal which brain abnormalities are ‘primary,’ meaning they are present in the individual from birth, and which are a consequence of the adaptability of the developing brain.

“This is one of the reasons why the present findings are difficult to interpret,” she says.

The new approach may prove useful in exploring the genetic and neurological underpinnings of autism, says Frith. “But it is unlikely to be useful for diagnostics in the immediate future.”