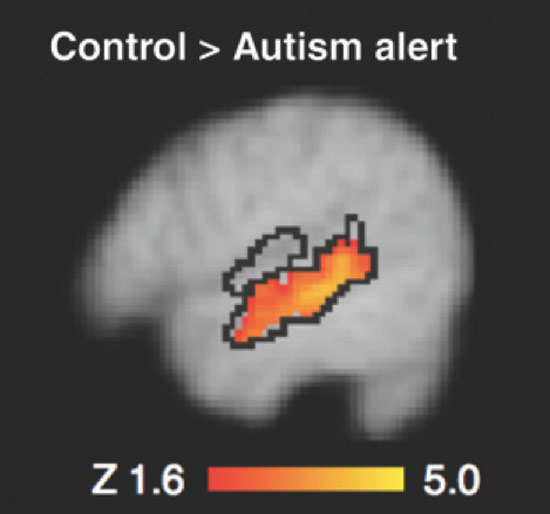 Scan signals: When listening to speech, children with autism have less activity in one part of the temporal lobe (red) compared with healthy children.

In the past year, several studies have suggested that brain scans could soon help clinicians diagnose autism.

Many experts disagree, saying these scans are far from — and may never be — ready for use as diagnostic tests.

“[Scans] give us insight into underlying mechanisms and heterogeneity, rather than actual diagnosis,” says Joseph Piven, professor of psychiatry at the University of North Carolina-Chapel Hill. The diagnostic angle “is so naïve and oversold,” Piven says. “It kind of misses the point of what this research should be about.”

Advocates often claim that brain imaging could offer a more objective way to diagnose autism than behavioral tests, which cost around $1,000 per child and cannot definitively diagnose the disorder before age 3. A diagnostic scan could conceivably identify signs of the disorder in the first year of life for a comparable price.

The studies in question compare brain activity of children with autism to that of healthy children and pinpoint distinctive patterns, or ‘signatures,’ in the autism groups. The research runs the gamut of technologies, from scanners that trace the shape of brain structures and neural connections to scalp electrodes that measure split-second blips in brain waves.

The latest of these studies appeared 31 May in Radiology1. Joy Hirsch of Columbia University and colleagues reported that, when listening to speech, children who have both autism and significant language problems show less activity in a word comprehension area of the brain than do healthy controls.

Findings like these are widely covered and often exaggerated by the popular press. But everybody, including the researchers themselves, seems fed up with the diagnostic spin.

“I am more than annoyed,” says Nicholas Lange, associate professor of psychiatry and biostatistics at Harvard University, who worked on an imaging study that identified differences in neural connectivity between autism and control groups. “In my unvarnished opinion, many reports appear to serve the scientists and the journalists directly involved, and not those they seek to serve.”

It’s not that imaging studies aren’t important: They give researchers a window into the living brain. By zeroing in on regions that seem to be different in people with autism, the scans also point to potential causes of the disorder.

But before being used as a diagnostic tool, imaging signatures must be verified with scans on volunteers of different ages and abilities.

For example, the field needs a firm grasp of how a healthy child’s brain develops in the first few years of life. Brain activity patterns in children with autism must be compared with those of children who have distinct, but similar, conditions, such as language delay or intellectual disability. Some experts argue that autism is simply not a candidate for diagnosis by brain imaging.

“Autism, as a thing, exists at the level of cognition and behavior,” says Richard Griffin, lecturer in psychology at Tufts University in Medford, Massachusetts. “When we look at neuroimaging data, we see electrical activity, blood flow, cellular structure, etcetera. We don’t see language, social interaction or anything that resembles thinking.”

In May, Griffin published a commentary2 criticizing an imaging study that reported distinguishing between infant siblings of children who have autism and healthy controls with 80 percent accuracy.

Because siblings have a higher-than-average chance of developing the disorder, the media trumpeted this study as a method for detecting infants at “high risk” of autism. That description is “seriously misleading” to the lay public, Griffin says, because most siblings of children with autism do not develop the disorder. “It’s easy to see why the media would report these findings — and some of the spin comes from the researchers as well.”

Some researchers blame the media entirely. “I don’t want to over-interpret these results, [but] a lot of people who are science writers want to do that,” says Hirsch, referring to her new study.

Still, she calls the work “a very important and seminal step toward showing that functional imaging can be used to differentiate autistic brains.”

Hirsch’s team scanned 12 children who have both autism and language impairments and 15 age-matched healthy controls using functional magnetic resonance imaging (fMRI). As they lay in the scanner, participants heard recordings of their parents talking to them. The autism group showed dampened activity in a region called the superior temporal gyrus compared with controls.

Hirsch attempted to verify the results by looking for the same pattern in 27 other children with autism and language impairments. This group had come to the hospital for unrelated MRI tests that require sedation. After adjusting the scans to control for differences between awake and sedated brains, the researchers showed that the autism signature appears in 26 of the 27 children.

“That’s the key, because it means that even if you sedate a child, you can drive a language system,” Hirsch says.

Other researchers are critical of the study’s methodology, however.

It’s not surprising that children who have language problems show differences in a region related to language, notes Susan Bookheimer, professor of cognitive neuroscience at the University of California, Los Angeles. “Would this differentiate autism from severe speech [or] language disorder? Unlikely.”

Others note that it’s inappropriate to compare awake and sedated groups. “Without a sedated control group, we cannot say that what they found is true,” notes Martin Styner, assistant professor of psychiatry and computer science at the University of North Carolina-Chapel Hill. “In my opinion, it’s meaningless.”

The case for imaging:

There is a push for imaging diagnostics for other brain disorders, too, notably Alzheimer’s and Parkinson’s diseases. But because these conditions occur in mature adult brains and show distinctive brain damage, imaging holds more promise for diagnosing them than it does for neurodevelopmental disorders, Styner says.

Still, researchers are keen to find imaging biomarkers for autism because of inadequacies in the way the disorder is typically diagnosed. The most rigorous tests are based on a trained clinician’s subjective assessments of a child’s behavior.

One drawback of these tests is timing: They cannot be done until behaviors are noticeably abnormal, which for many children isn’t until 2 or 3 years of age. Yet studies show that children with autism benefit from early interventions.

Behavioral testing also takes about six hours and runs to at least $600 per child, according to Janet Lainhart, associate professor of psychiatry at the University of Utah. Because the evaluation is usually done in a mental health clinic, insurance only covers half of the expense, she adds.

The costs of imaging are comparable, and are likely to become less expensive over time, she says. An hour in an MRI machine costs about $600, but children may only need to be scanned for 15 minutes. And because it’s considered a medical laboratory test, insurance pays about 80 percent. “So the cost to the family will likely be much, much less,” Lainhart says. Last year, Lainhart and Lange reported brain signatures of autism using diffusion tensor imaging, an MRI-based method.

Like the other studies, Lainhart’s could only distinguish between a child with autism and a healthy child — something that a naïve observer could probably do just as well. The goal of a clinical diagnosis is to distinguish autism from related disorders, such as speech delay or attention deficit hyperactivity disorder. “Right now, imaging methods give less information than a clinical diagnosis,” Lainhart says.

But in a few years, after many more children are scanned, imaging may significantly add to behavioral evaluations, Lainhart says.

“Imaging could bring the medicine of autism into the 21st century,” she says. “But much, much more work needs to be done.”