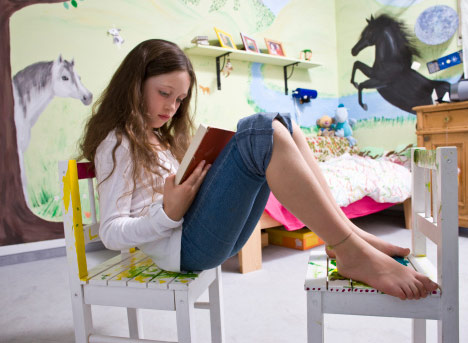 Subtle signs: Girls may manifest symptoms of autism in subtle ways — such as obsessing over facts about horses — and may go undiagnosed as a result.

Boys and girls with autism may have similar symptoms. They may have trouble empathizing with others, for example, or have difficulty carrying on conversations.

Still, girls are less likely to be diagnosed with autism than boys are, unless they also have intellectual or behavioral problems, according to a study published 26 June in the Journal of the American Academy of Child and Adolescent Psychiatry1.

This suggests one of two things, says lead investigator Francesca Happé, professor of cognitive neuroscience at King’s College London. It suggests either that clinicians miss autism in girls, or that girls are better able to cope with any social or communication difficulties — as long as they don’t also have a low intelligence quotient or behavioral problems such as hyperactivity.

Autism is known to be more prevalent in males than in females: About four times as many boys as girls are diagnosed with autism.

At first, researchers thought this is because autism is tied to the X chromosome, says John Constantino, professor of psychiatry and pediatrics at Washington University in St. Louis, Missouri, who wasn’t involved in the study.

Other conditions linked to intellectual disability, such as X-linked mental retardation, are known to fall along gender lines. But studies suggest that this does not explain all of the observed gender bias in autism.

Other potential explanations for the gender imbalance include greater susceptibility among boys because of hormone levels, diagnostic tests that are better at diagnosing the disorder in boys than in girls, and girls being genetically protected in some way.

“The fact is that very little is known,” says Constantino. “I think it’s open season.”

In the new study, Happé and her colleagues used data from the Twins Early Development Study, a U.K.-based project that follows twins born between 1994 and 1996 to understand gene-environment interplay.

The researchers looked at two independent measures of autism for 363 participants: the Childhood Autism Spectrum Test (CAST) for 8-year-old children, and the Development and Well-Being Assessment (DAWBA) for 10- to 12-year-olds.

Of the 302 children that scored above the high-risk threshold for developing autism on CAST, 227 are boys and 75 are girls. Only 20 of those girls meet the diagnosis criteria for autism using DAWBA — a diagnosis rate of 38 percent — compared with 108 boys, or 56 percent.

Their results are consistent with other studies in finding a gender bias in diagnosis, but it’s unclear how they fit with the genetic and behavioral underpinnings of autism.

For example, clinicians may have a male stereotype in mind when diagnosing autism. That could be problematic because girls may manifest autism-like behaviors [differently] than boys do, says Happé.

“A girl with autism may be fascinated by horses or by a particular pop star,” says Happé. This isn’t unusual among girls, and may not stand out as much as a boy who is obsessed with the Latin names of plants, for example. “But the intensity and narrowness of [her] interest is unusual.”

A separate study published in August in the Journal of Attention Disorders suggests that gender differences in some aspects of behavior among children with autism mirror those among typically developing children2.

Analyzing data from parent questionnaires collected on 64 children with autism and 60 controls — girls comprising roughly half of each group — researchers found that boys and girls with autism have similar levels of social difficulties. Boys in both groups have more repetitive motor movements and attention and communication problems than the girls do.

Some girls, such as those who have Asperger syndrome, may have learned to cope with social or communication difficulties by mimicking how others dress or interact with people, says Simon Baron-Cohen, professor of developmental psychopathology at Cambridge University in the U.K.

“This means that for the first hour of a diagnostic interview, the clinician is often convinced that the person does not have Asperger syndrome, “Baron-Cohen says. This sort of coping behavior is incredibly stressful and tiring, however.

There can also be a kind of diagnostic overshadowing in clinics, says Happé. That is, a clinician might take symptoms of autism at face value and not probe the underlying cause.

For example, there has been speculation that some girls with eating disorders, such as anorexia, may in fact have an autism spectrum disorder, she says. “But the clinician sees that as an eating disorder, which of course is a far more female-typical condition.”

Happé plans to follow the children in her study long term to see how they fare as they transition out of school around 18 or 19 years old. She aims to assess their overall quality of life, the stresses they may encounter, and whether they face any consequences a result of their coping behavior.