The findings from the conference report below were published 19 April 2016 in Molecular Psychiatry1. 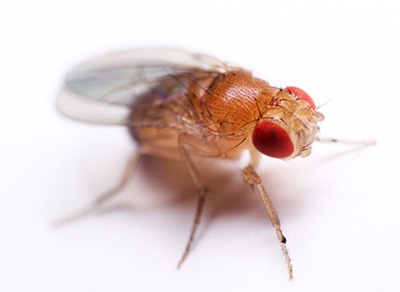 The memory and sleep troubles that accompany fragile X syndrome originate in a glitch in insulin signaling, suggests an unpublished study of fruit flies presented today at the 2014 Society for Neuroscience annual meeting in Washington, D.C.

Metformin, the drug most commonly prescribed for diabetes, reverses these problems in the flies. The findings suggest the drug may help people with fragile X syndrome.

“The great thing about metformin is it’s very, very safe and very, very well tolerated,” says Sean McBride, a postdoctoral fellow in Thomas Jongens’ lab at the University of Pennsylvania, who presented the work. “We’d like to move this forward in the mouse and then hopefully get a clinical trial going in people.”

Several years ago Jongens’ group created a Drosophila model of the syndrome by disrupting the fly version of FMR1. The mutant flies show defects in memory, social behavior (as measured during courtship rituals) andsleep and circadian rhythms.

In the new study, the researchers used tricks of genetic engineering to express normal FMR1 in subsets of the mutant flies’ brain cells. Much to their surprise, restoring the gene in cells that produce DILP2 — a fly version of insulin — reverses the flies’ circadian impairments. This was particularly intriguing because the fly brain has just 14 of these cells. “I was pretty shocked by this,” McBride says.

The researchers found that the mutant flies have abnormally high expression of DILP2 in those 14 cells, as well as a hyperactivation of the insulin pathway across the brain. Restoring FMR1 expression in the DILP2 cells curbs insulin signaling.

In the fly, the insulin pathway begins when DILP2 and similar proteins bind to the insulin receptor. This activates several proteins, including PI3 kinase and mTOR. This pathway is involved in growth and development, and has been linked to cancer and other types of autism.

The researchers genetically manipulated several parts of the pathway in the mutant flies. For example, they found that blocking PI3 kinase, directly or indirectly, reverses the mutants’ memory and circadian deficits.

The also tried giving adult mutant flies a nine-day treatment of metformin. This type-2 diabetes drug is known to inhibit the activity of PI3 kinase and mTOR. Metformin also reverses the fragile X-related problems in the flies.

People with fragile X syndrome don’t seem to have an increased risk of developing diabetes. The new study suggests that they instead have a subtle dysregulation of glucose signaling, McBride says.

Metformin may also be effective in other neurodevelopmental syndromes that tap into this pathway, such as tuberous sclerosis and neurofibromatosis type 1, he says.