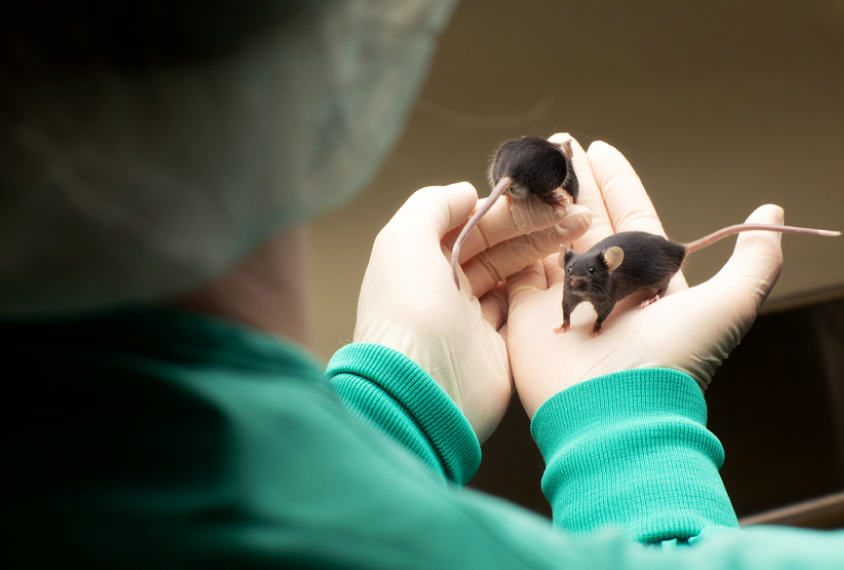 Social distancing: Female mice missing a copy of the KMT5B gene are prone to antisocial and stress-induced repetitive behaviors.

Loss of the gene KMT5B stunts growth in male mice and leads to social difficulties in female mice, a new study suggests.

Mutations in KMT5B are strongly associated with intellectual disability and autism in people, according to work that began about five years ago. The new study is the first to investigate the mutations’ effects on the mouse brain.

“We knew basically nothing about what it did in the brain until our paper,” says lead investigator Holly Stessman, assistant professor of pharmacology and neuroscience at Creighton University in Omaha, Nebraska.

Likely very few people in the world have KMT5B mutations, Stessman says, but the gene may shape the function of other autism-related genes.

The new study provides an important first step toward understanding how KMT5B mutations might affect a wide array of autism traits, says Siddharth Banka, senior lecturer in evolution and genomic sciences at the University of Manchester in the United Kingdom, who was not involved in the study.

“I think this study provides a good introduction to a mouse model for the disease, which will be useful going forward,” he says.

Stessman and her colleagues obtained mice from the Knockout Mouse Project and bred them to produce litters of mice missing one or both copies of KMT5B, as well as wildtype controls.

Mice missing both copies died as embryos or soon after birth, but the team carried out a battery of social and cognitive tests on male and female young adult mice missing one copy of the gene. They assessed sociability; learning and memory; fear; anxiety and depression. Compared with wildtype mice, the animals — both male and female — were less depressed and anxious.

The researchers found several sex differences among the mice missing one copy of KMT5B, however. Females were prone to antisocial and stress-induced repetitive behaviors, whereas the results in males were unclear. And the male mice tended to be hypersensitive to pain, whereas the females demonstrated the opposite.

The newborn males in particular had weaker reflexes on a series of motor tests and opened their eyes later than wildtype mice. They also had significantly smaller bodies and brains than wildtype mice. And compared with female mice missing a copy of the gene, these differences occurred earlier, were more pronounced and persisted until later into adulthood.

This overall shrinkage in the males may reflect KMT5B’s role in cell proliferation and maintaining a reserve of adult muscle stem cells for muscle regeneration, Stessman says.

“If you’re depleting that pool too early, that might explain a growth problem that we see in our mice,” she says.

The study provides a broad overview of how KMT5B may be implicated in autism, Stessman says. But the strain of mice used to create the knockouts — known as C57BL/6N — tends to be less social than other strains, raising important questions about the validity of the results, she says.

In one of the sociability tests most relevant to autism, the three-chambered sociability test, the wildtype mice in the study showed no preference for an unfamiliar mouse, contrary to other wildtype mice. This difference suggests the test may have been done incorrectly, says Jacqueline Crawley, professor emeritus of psychiatry and behavioral sciences at the University of California, Davis, who was not involved in the study and who created the task.

It’s also unclear how the study’s mouse model squares with what we know about people with KMT5B deletions, Banka says. Whereas mice in the new study shrank and lost body weight, people with the deletion tend to be taller and have a larger-than-average head size than people without the deletion, according to a study he conducted.

“It’s opposite [of] what we find in humans,” Banka says. “And that is not explained or not explored.”

Although KMT5B may affect similar mechanisms in mouse and human brains early on, its downstream effects on growth and cell division may be starkly different, he says.

Stessman and her colleagues plan to pinpoint which genes KMT5B regulates and learn more about where and when it is expressed in the brain, particularly in the context of early embryonic brain development, she says.