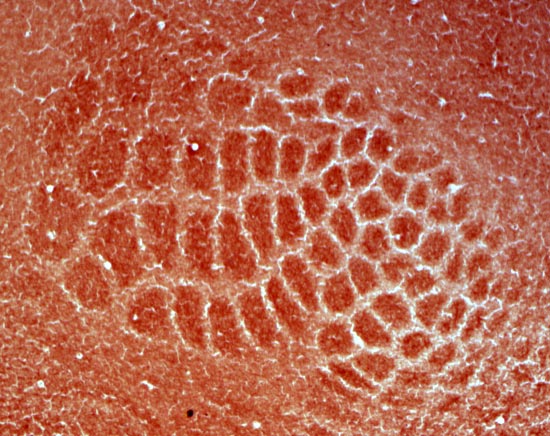 Sensing trouble: In mouse models of fragile X syndrome, the whisker-response region (above), is late to mature.

Young mouse models of fragile X syndrome show a significant lag in the development of synapses, the connections between neurons, according to a study published in February in Neuron1.

The researchers spotted the delay in the barrel cortex, the region of the mouse sensory cortex that responds to whisker sensation. Their findings suggest that a similar mistiming may be responsible for the sensory problems — such as hypersensitivity to touch and sound — sometimes seen in people with fragile X syndrome.

The study marks the first time that researchers have identified a functional synaptic problem in the development of fragile X syndrome, a genetic disease characterized by mental retardation and, often, autism.

“It basically awakens the field to the fact that we need to focus on earlier time points in development,” says Ricardo Galvez, assistant professor of psychology at the University of Illinois at Urbana-Champaign, who was not involved with the work. “Now we can start looking at how drugs affect abnormalities in these earlier time points, with the hope that we can somehow turn back the clock.”

Fragile X syndrome is caused by repeated DNA sequences in the FMR1 gene, which encodes the FMRP protein. Scientists don’t understand the precise role of FMRP, but say it may be involved in synthesizing proteins surrounding the synapse.

During normal development, brain cells grow many dendritic spines — long, thin branches that receive electrical signals from other cells. During a short ‘critical period’, those young spines that are adequately stimulated morph into sturdy, mushroom-shaped synapses and those that aren’t disintegrate.

Older neurobiological studies have found some anatomical signs that this pruning doesn’t happen properly in people with fragile X syndrome and in mice that lack FMRP. For instance, scientists analyzing postmortem human brain tissue from adults with the syndrome have found denser, longer and more dendritic spines in several cortical areas compared with healthy controls2. Adult mouse models have similarly immature spines in the sensory cortex compared with controls3.

In the new study, researchers electrically stimulated brain slices taken from mice at various times from just after birth to about three weeks old. They found that the critical period in these animals peaks around postnatal day seven — about four days after it does in healthy animals. In mice, the first week of life is roughly equivalent to the second trimester of a human pregnancy.

“We think that if that plasticity is disrupted, even by a few days, there’s other consequences further down the line, because each segment of the cortex has to develop in a precise way at a precise time,” says lead investigator Anis Contractor, assistant professor of physiology at Northwestern University.

If the sensory cortex misses these essential developmental cues, it could lead to a widespread miswiring and, eventually, trouble with processing sensory stimuli, he adds.

Interestingly, when the researchers looked at later time points, around postnatal day ten or after, they found no difference in synaptic plasticity between the fragile X mice and controls.

“It seems that the brain has this capacity to compensate, but cannot compensate in a timely fashion,” notes Miklos Toth, professor of pharmacology at Cornell University, who was not involved with the work. “It’s a little bit late. But that little delay, that’s enough to make a life-long problem.”

Toth’s work has shown that mouse models of fragile X, like people with the syndrome, are hypersensitive to sensory stimulation4,5. He points out that the new study doesn’t address whether the delay in synaptic plasticity is causing these behaviors.

To find out, researchers would need to perform a rescue experiment, in which they try to reverse the sensory problems by using a drug to normalize the delay in synaptic plasticity.

It’s also unclear whether these early problems in synaptic plasticity affect later stages of development. The new study analyzed the first critical period in mouse development, when dendrites from the thalamus — a deep brain region that relays signals to several outer areas — make connections to the barrel cortex.

Around postnatal day 30, mice go through another critical period, in which synapses within the different layers of sensory cortex make connections to one another. Connections that aren’t strengthened during this period are lost. Galvez’s work has shown that in fragile X models, this later stage of pruning doesn’t happen.

If the connections from the first critical period aren’t hardwired by postnatal day seven, that could delay or prevent the proper development of synapses in later critical periods, setting off a “snowball effect,” Galvez says.

The problem could also originate even earlier. “One of the things that this paper is screaming for us to think about is whether there are other critical windows that happen in utero that we don’t normally study, because they’re so difficult to examine,” Galvez says.