Defects in mitochondria linked to autism 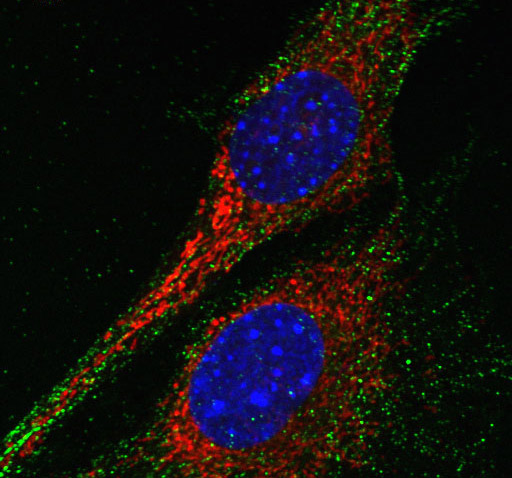 Energy star: Mitochondria (in red) supply all of the energy needed to power neurons, but only about half of the energy used by immune cells.

Cells drawn from a small sample of children with autism show defects in the functioning of their mitochondria — structures that produce energy to power cellular functions — according to a study published this week in the Journal of the American Medical Association1.

However, the small size of the sample — ten children with autism and ten controls — and aspects of the study’s methodology trouble some researchers who are investigating the same phenomenon.

The new study looked at lymphocytes — a type of white blood cell that helps fight infection — and found that the cells produce less energy than do those from healthy controls. The level of the enzyme pyruvate dehydrogenase, an indicator of mitochondrial activity, is also markedly lower in the cells of those with autism. Other biomarkers of mitochondrial function are between 30 and 60 percent lower than controls in about half the children.

Earlier studies with muscle tissue have also found evidence of mitochondrial dysfunction in children with autism2,3.

Brain development depends on the energy produced within cells, so mitochondria that fail to supply neurons with enough energy could play a role in neurodevelopmental disorders like autism, says lead investigator Cecilia Giulivi, professor of molecular biosciences at the University of California, Davis.

However, the unconventional decision to use lymphocytes should have been validated, says Fernando Scaglia, associate professor of molecular and human genetics at Baylor College of Medicine in Houston. “I’m not saying that studies done in lymphocytes are useless,” says Scaglia, an expert in inherited metabolic disease. “But they should be validated in other tissue.”

About 1 in every 4,000 people has a mitochondrial disease. Symptoms range from muscle cramping to seizures and liver failure, all caused by mitochondria’s failure to transform sugars to energy that can power cellular function.

The possibility of a link between mitochondrial defects and autism has intrigued researchers since the first report of mitochondrial disease in a child with autism in 19984. Ten years later, the U.S. Court of Federal Claims Vaccine Program ruled that vaccination had aggravated a pre-existing mitochondrial disorder in a 9-year-old girl, and had led to her degenerative brain disease, with features of autism.

Researchers say there is no evidence to support a link between autism and vaccination. However, a handful of groups in the U.S. and overseas are investigating whether mitochondrial defects are present in a subset of people with autism.

“Lymphocytes are fine to study chromosomal DNA, but they are a horrible source for studying mitochondrial DNA,” he says.

Cells have hundreds of mitochondria, each with multiple copies of the DNA. In people with mitochondrial disease, some cells have healthy DNA and others have the mutated copies, he notes. In a blood sample, defective lymphoctyes tend to get lost among rapidly proliferating healthy cells.

“The best source for studying mitochondria are post-mitotic cells such as muscle,” he says. “That way you are sampling the set of cells the child was born with.”

Giulivi says her team decided to use lymphocytes after studying frozen genomic DNA samples taken from children in the CHARGE study, based at the M.I.N.D. Institute in Sacramento, which investigates the link between genetics and the environment in autism.

Drawing blood is far less invasive than taking a muscle biopsy, Giulivi points out, and less painful and difficult for children. “We wanted to use something readily available,” she says, particularly because one of the goals of the study is to find metabolic biomarkers for autism.

They not only found elevated levels of hydrogen peroxide, but also saw deletions in mitochondrial DNA in two of the ten children with autism.

“More oxygen is produced by the mitochondria, which tries to overcome the damage by producing more mitochondrial DNA copies,” Giulivi says. “In this battle between free radicals that damage everything they find, you see mitochondrial DNA deletions, broken down by these highly reactive species.”

Gargas says that because the team used polymerase chain reaction (PCR) to examine partial sequences of mitochondrial DNA, rather than full mitochondrial DNA sequencing, he’s not sure what to make of this finding. “That’s the one [result] I have the least confidence in,” he says.

Like the use of lymphocytes, the partial sequencing methodology to measure copy number needs to be validated, adds Scaglia, as “quantitative PCR can be inaccurate.”

Though the study is small, Giulivi says the results are statistically significant. Her team is looking at the parents and siblings of the children. “It would be nice to see if any of the other family members are affected, perhaps in a subclinical way.”