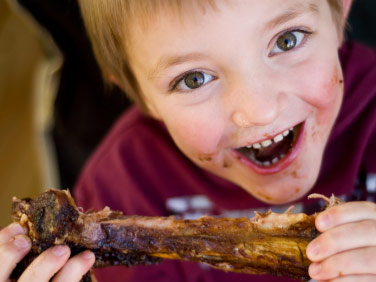 Meat eater: Genetic defects in the body’s ability to make the molecule carnitine, which is found in high levels in red meat, may be linked to autism.

Meat eater: Genetic defects in the body’s ability to make the molecule carnitine, which is found in high levels in red meat, may be linked to autism.

A genetic defect in the synthesis of carnitine, a molecule that plays a central role in the body’s ability to make energy, might slightly increase risk for autism in some children, according to research published 8 May in the Proceedings of the National Academy of Sciences1.

The study found that in families that have two boys with autism, those boys are 2.82 times more likely than controls to have a deletion in the gene trimethyllysine hydroxylase epsilon (TMLHE). This gene codes for the first enzyme in a biochemical reaction that synthesizes carnitine in the body. The project was funded in part by the Simons Foundation, SFARI.org’s parent organization.

The finding is interesting because it suggests both “a potential mechanism and also a potential treatment,” says Joseph Gleeson, professor of neurosciences at the University of California, San Diego, who was not involved in the study. Carnitine supplements are available over the counter, and the molecule is abundant in red meat.

He and others caution, however, that the findings are preliminary and need to be replicated in a larger population, particularly in more multiplex families, which have two or more children with autism, says Gleeson.

Even if TMLHE defects have a small effect compared with other genetic risk factors, the fact that it is a risk factor that can potentially be treated with a simple supplement makes it important to study further, says Arthur Beaudet, professor of molecular and human genetics at Baylor College of Medicine in Houston, Texas, and senior scientist on the research.

Two observations from the study argue against TMLHE playing a major role in autism. The researchers did not find a link between the mutation and autism in simplex families, which have only one affected child and unaffected parents and siblings. (That may change once larger groups are studied.)

Moreover, they found that mutations in TMLHE are fairly common in typical males, found at a rate of 1 in 366. Only about three percent of males with the deletion have autism.

Carnitine, which helps transport fatty acids into the mitochondria, can either be made by the body or derived from the diet. Meat eaters get roughly 75 percent of their carnitine from food. Vegetarians and especially vegans, on the other hand, must synthesize the majority of the molecule.

The TMLHE deletion is the first example of an inherited disorder of carnitine synthesis within the body. Scientists have known about more severe genetic defects that prevent the molecule from getting into cells, disabling the body’s ability to process fats for energy. This disorder can be detected in routine newborn screening. Symptoms typically occur in infancy or early childhood and include severe brain dysfunction, but these disorders are not generally linked to autism.

Beaudet’s team first linked TMLHE to autism when they were scanning for small deletions in the exome — the protein-coding portion of the genome — in families that have a child with autism. They discovered one child with a deletion of the second exon in the gene2.

All together, researchers have identified the same deletion in 22 people with autism, but also in 24 healthy males. The team focused on males because the gene is located on the X chromosome. Males have only one copy of the gene and are more likely to show symptoms.

After failing to find a significant link between autism and the mutation in simplex families, Beaudet and his colleagues decided to focus on families that have two boys with the disorder. They hypothesized that the mutation might be enriched in this group because a mother with one bad copy of the gene has a 50 percent chance of passing the mutation to each son.

Sequencing 900 males from sibling pairs in which both boys have the disorder, the researchers found the mutation at a rate of 7.7 percent compared with 2.7 percent of controls. (These were mainly unaffected fathers from several different autism projects.) In six out of seven of the cases, the second brother has the mutation as well.

The researchers also analyzed data from 43 boys with autism who have a sister with autism, but found no cases of the deletion.

Biochemical studies showed that those with the deletion have very low or undetectable levels of the enzyme produced by TMLHE. But the effect on carnitine levels, and the link to autism, is still unclear. Two of the boys with the mutation, age 15 and 17, have normal blood levels of carnitine.

“This is a brand-new metabolic error, and a lot more needs to be learned to know what’s going on,” says Ellen Elias, a member of the autism subcommittee at the American Academy of Pediatrics, who was not involved in the study. “Time will tell how significant this really is for the autism community.”

Aside from the potential link to autism, the frequency of this disorder in the general population is a surprise, researchers say.

“It’s rather startling because it’s 20 times more common than PKU in males,” says Beaudet, referring to phenylketonuria, a metabolic condition in which people can’t break down a specific amino acid. Inherited metabolic disorders typically occur in only about 1 in 10,000 children, he says.

Beaudet says his priority now is to replicate the finding in a larger sample. His team aims to recruit 1,000 male sibling pairs, and he says he hopes the new publication will encourage families and physicians to participate.

Because dietary carnitine is supplied mainly through meat, Beaudet says he suspects that risk associated with this gene might be higher among vegetarian families. He aims to study such families, either in the U.S. or in countries such as India where vegetarianism is more common.

Beaudet also speculates that carnitine metabolism could play a broader role in autism than is suggested by this particular gene. “We are interested in other aspects, such as the amount of carnitine in diet, and genetic variation in the ability to transport carnitine across the blood-brain barrier,” he says.

Beaudet’s laboratory plans to offer free genetic testing to boys with autism who are younger than 5 and are non-dysmorphic, meaning they don’t have unusual facial features or birth defects. Dysmorphology would typically signal that a more severe genetic mutation is at play.

Some tenuous links between carnitine and autism already exist. Defects in the mitochondria, which have previously been linked to autism, can sometimes lead to carnitine deficiency. And treating children with autism with valproic acid, an anti-seizure medicine that can lower carnitine levels, can have serious side effects.

Douglas Wallace, director of the Center for Mitochondrial and Epigenomic Medicine at The Children’s Hospital of Philadelphia, says Beaudet’s findings are in line with his own theory that a number of the genetic defects underlying autism affect mitochondrial function.

“We think this kind of partial energy defect may be an important factor in autism,” says Wallace. He published a paper on 17 April identifying a number of copy number variants — deletions or duplications in stretches of DNA — in people with autism encompassing genes involved in cellular energy production, the structure of neuronal connections, and ion transport3.

Elias says it’s too soon to know whether giving carnitine to children with autism would help. The supplement, which is currently used to treat severe inherited or drug-induced carnitine deficiency, can cause side effects in children, such as intestinal troubles.

If the link between carnitine deficits and autism is repeated in a larger study, clinical trials would then be needed to determine whether carnitine supplements can help prevent or treat the disorder.