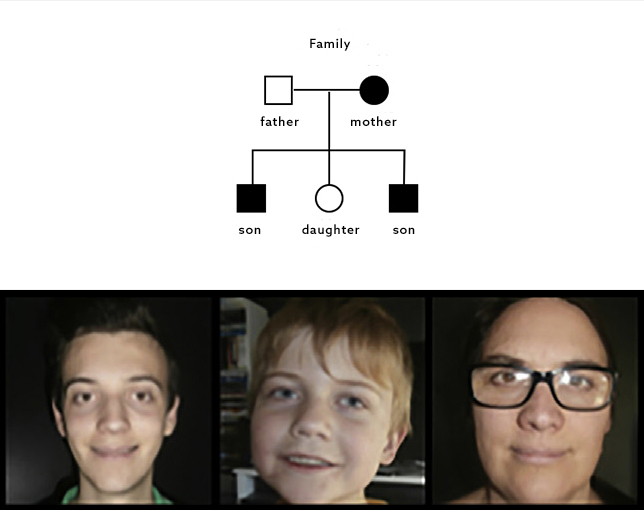 Family matters: A mother and her two sons each have a mutation in a gene called NAA15.

Harmful mutations in a gene called NAA15 may lead to autism, intellectual disability and delayed speech and motor function1.

NAA15, a gene that modifies other cellular proteins, has known ties to developmental delay. And a few sequencing studies identified harmful mutations in the gene in people with autism2.

In the new study, researchers sought to characterize the effects of mutations in NAA15. They identified and characterized 38 people who carry an NAA15 mutation.

Overall, mutations in the gene are more common in people with a neurodevelopmental condition than in the general population, says lead researcher Gholson Lyon, assistant professor at Cold Spring Harbor Laboratory in New York.

“I was confident we were on to something,” Lyon says.

Of the 38 people with an NAA15 mutation, 24 have autism features. All of the 23 individuals who were tested have intellectual disability.

Those numbers convincingly link the gene to both autism and intellectual disability, says Stephan Sanders, assistant professor of psychiatry at the University of California, San Francisco, who was not involved with the study.

“I think it’s fair to say this is a new association with intellectual disability and autism,” he says. “It’s time for a family group to start up with this and to figure out how it fits into the big picture for autism.” Family groups provide support and resources for members, as well as spurring scientific progress.

In a study published last year, another team of researchers sequenced NAA15 in more than 13,000 people from across the globe. This effort identified 13 people with a harmful mutation in the gene.

For the new work, researchers combed large databases of genetic information from people with developmental conditions. They also registered with the GeneMatcher program, which connects scientists with people who have a mutation in a gene of interest.

The researchers collected information from clinicians on the features of individuals with NAA15 mutations.

The findings link the mutations to motor delays and possibly congenital heart defects; 4 of the 38 individuals have heart defects. The study appeared 3 May in the American Journal of Human Genetics. A previous study linked NAA15 mutations to heart defects and neurodevelopmental delay. However, the new results suggest that other genetic factors may be necessary for the effect on the heart, Lyon says.

The clinical observations are a strength of the study, says Raphael Bernier, professor of psychiatry and behavioral science at the University of Washington in Seattle, who characterized some of the people in the study.

“It’s all good and well if we find genes that reach significance in research cohorts, but you need to actually go back and find patterns in actual people to make sure the gene has meaning in relation to the phenotype,” Bernier says.

NAA15’s function is unusual for an autism candidate: It modifies other proteins.

“It’s sort of orthogonal to what we’ve seen before. From that point of view, it will be interesting to see how it all fits together,” Sanders says.

Lyon and his colleagues are looking for more people who carry mutations in NAA15 and the related gene NAA10, also implicated in developmental delay.