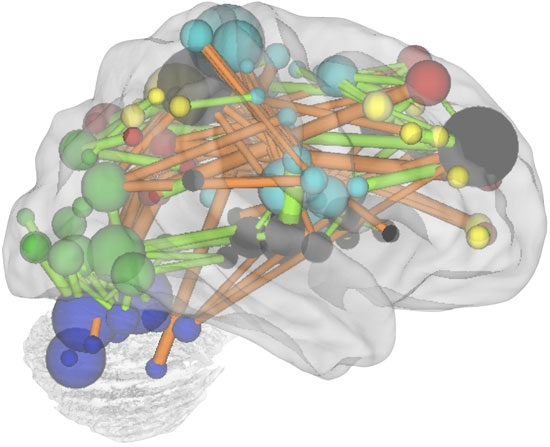 Science/AAAS Resting brain: Even when people lie passively in a brain scanner, several regions of their brain are in sync.

Some areas of the brain are active when daydreaming or sleeping, but become quiet during most goal-directed tasks. The hubs of this circuit are not synchronized properly in individuals with autism, according to an imaging study published 15 October in Neuroimage1.

In the past few years, there has been a flurry of interest in this so-called ‘default network’ and its role in autism and other psychiatric conditions, such as schizophrenia and attention deficit hyperactivity disorder (ADHD). For example, in August, researchers reported that children with ADHD have weak connections among regions of the default network2.

Scanning the network is catching on partly because it’s relatively cheap, quick and can be done on children. “We think the default mode offers the best window into brain function for a number of disorders,” says Godfrey Pearlson, professor of psychiatry at Yale University and lead investigator of the autism study. “You can acquire very interesting quantitative data in just five minutes.”

Individuals with autism and those with ADHD have problems with attention, routine behaviors and impulse control, all of which can be probed by studying the default network, notes Joel Nigg, who led the new ADHD study. “It’s a powerful way to index the fundamental tension between our automatic and our deliberate behavior,” says Nigg, professor of psychiatry and behavioral neuroscience at Oregon Health and Science University.

The fact that children with autism and children with ADHD show similar patterns of default network activity might explain why the disorders have significant overlap in symptoms, he adds.

The approach could someday help diagnose the disorders — but only after researchers analyze the scans from many clinical subgroups. “At the moment, it’s still hype, but I hope it’ll be feasible down the line,” Nigg says.

Researchers first noticed in the 1990s that certain regions of the brain are more active while participants are resting than while they perform a specific task3. One of the researchers, Marcus Raichle, later coined the term ‘default mode’ to describe this pattern4.

A 2003 study showed that it’s possible to measure this network when a participant lies passively in a brain scanner for just five to ten minutes5, a finding that dramatically boosted research in this arena. The technique, called ‘resting-state functional connectivity,’ determines which brain regions are most in sync — ramping up or down at the same time — implying that they’re part of the same circuit.

Many circuits, including those related to visual, auditory, motor and memory systems, show this synchronized humming at rest. “This appears to be some very important element of how the brain organizes itself,” says Raichle, professor of radiology at Washington University in St. Louis. “These aren’t a bunch of free-wheeling, balkanized systems — they’re both organized within themselves and organized among themselves.”

The network that has received the most attention — and is probably least understood — is the default network.

“There really is no consensus in the field about what this network is doing,” says Michal Assaf, senior research scientist at the Olin Neuropsychiatry Research Center in Hartford, Connecticut.

Some clues come from traditional, task-based experiments showing that several regions of the default network are important for introspection and social cognition. The medial prefrontal cortex, for instance, is involved in the ability to understand what people are thinking, or ‘Theory of Mind,’ which is impaired in people with autism. Likewise, the posterior cingulate cortex is thought to be involved in self-reflection and social memory, both of which are difficult for people with the disorder. In the new autism study, Assaf and Pearlson gathered five-minute scans of 16 individuals with high-functioning autism and 16 healthy controls, all between the ages of 11 and 23.

The researchers found that individuals with autism show weak connectivity in two core areas of the default network: the precuneus — a deep groove in the parietal lobe, wedged between the two hemispheres — and the medial prefrontal cortex. What’s more, they found, the weaker the synchrony between areas, the more severe is the participants’ social impairment.

Pearlson’s group is investigating the default network and other resting-state circuits in people with various psychiatric disorders and their unaffected relatives. Ultimately, the researchers hope to identify common genetic variants that are associated with particular patterns in the resting brain and confer risk of developing a disorder.

For example, if 200 genes associated with a resting-brain signature tend to crop up in the precuneus of people with autism, the genes might cluster into just a few biological pathways. “You may come up with novel pathways that no one’s really considered before,” Pearlson says. “It gives you leads that could translate into clinical therapeutics.”

Analyzing murmurs of the resting brain could also help researchers understand and compare the trajectory of psychiatric disorders.

On 10 September, researchers reported in Science that brain maturity can be gauged based on individual resting-state scans2. By scanning healthy people aged 7 to 30 years, the team found that six major long-range circuits — including the default network — strengthen with age6. The finding is intriguing because one long-held hypothesis holds that autism is associated with weak long-range connections, such as those between the brain’s right and left hemispheres.

Still, it’s foolhardy to extrapolate these findings too far because researchers have just begun to collect resting-state scans from young children and from those with developmental disorders, notes Steven Petersen, lead investigator of the Science study and professor of cognitive neuroscience at Washington University.

His team, for instance, is collecting scans from families that have only one child with autism. “If it turns out that every neurodevelopmental disease is a matter of the immaturity of connections, then [the scans] would not be terribly useful as a diagnostic tool,” he says.

In fact, many studies have suggested that ADHD, like autism, is the result of delayed brain development, notes Petersen’s co-investigator Damien Fair, a postdoctoral fellow in Nigg’s lab at Oregon Health and Science University.

To parse the similarities between the two disorders, Fair and Nigg are measuring default-network patterns in about 100 children with autism with and without hyperactivity, 100 children with ADHD, and 100 healthy controls.

Because of the relative ease of the methods, the field of functional connectivity research “is really exploding,” Fair says. “It’s a resting-state tsunami.”