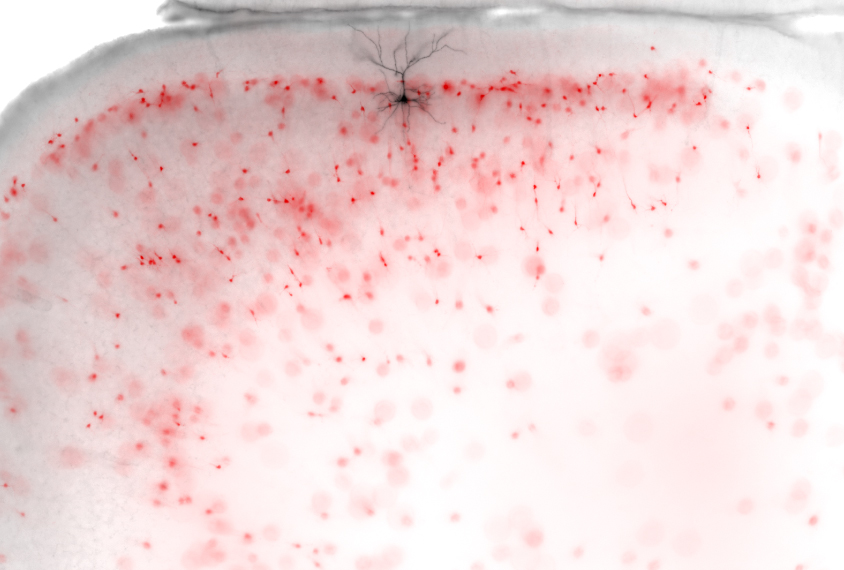 Mice missing a copy of the autism-linked gene FOXG1 in the brain have atypical social behavior and an imbalance in excitatory and inhibitory signals, according to a new study. Transplanting wildtype inhibitory neurons into the animals between their first and second weeks of life prevents these differences from occurring, the study also shows.

The results pinpoint a critical time window for FOXG1 during neurodevelopment. Mutations in the gene cause a rare form of autism called FOXG1 syndrome.

The researchers who led the new work suspected the gene leads to autism traits by disrupting the development of circuits involving the inhibitory chemical messenger gamma-aminobutyric acid (GABA). Having too few GABA-producing cells could result in an imbalance between excitatory and inhibitory brain signals, which is linked to autism.

Impairments in these GABAergic cells contribute to other autism-linked conditions, including Rett syndrome and Angelman syndrome, according to previous work in mice. And too much FOXG1 appears to cause an overgrowth of GABAergic neurons in organoids derived from the cells of autistic people with no known autism-linked mutations.

“We already had this GABAergic hypothesis, and on top of that we had this gene FOXG1, so we wanted to put them together,” says lead investigator Goichi Miyoshi, assistant professor of neurophysiology at Tokyo Women’s Medical University in Japan. “Maybe there’s a link.”

To forge the connection, Miyoshi’s team created novel mice missing one copy of FOXG1 from some or all of their cells. Unlike controls, mice missing the gene throughout their bodies had no preference for interacting with another mouse over an empty cage, a sign of atypical social behavior. They also had fewer GABAergic neurons and smaller brains than controls.

All of the FOXG1 mice showed a signaling imbalance only as juveniles, even though the behavior differences appeared in adults. The team found they could block both the signaling imbalance and atypical social behaviors by transplanting immature GABAergic cells from wildtype mice into the cortex of 1-week-old FOXG1 mice. Transplanting the cells at 3 weeks had no effect.

When the team manipulated wildtype mice to overexpress FOXG1 in both inhibitory and excitatory cells, these mice, too, showed social-behavior differences — but only when FOXG1 was overexpressed between 1 and 2 weeks of age. Overexpressing the gene when mice were older than 2 weeks had no effect.

The findings were published in Nature Communications in June.

The fact that behavior differences occur only when the gene is altered in both types of neurons is “intriguing,” says Flora Vaccarino, professor of neuroscience at Yale University and lead investigator on the organoid study, who was not involved in the new work.

Although some of the effects are subtle and need to be further investigated, she says, the study is “the first time we actually have an inkling of” precisely how the gene is contributing to autism.

The identification of a critical time window for FOXG1’s role in brain development offers hope that interventions could help children with FOXG1 syndrome, says Ilaria Meloni, associate professor of medical genetics at the University of Siena in Italy, who was not involved in the study.

Because many traits of the syndrome are severe, researchers have questioned whether interventions after birth could have any benefit, Meloni says.

“It suggests for the first time that we have a real time window for intervention,” she says, and adds that the new mouse models will be useful for future work.

Miyoshi suspects that FOXG1 is crucial for a small subset of both inhibitory and excitatory cells that help build brain circuits early in development. His team is working to identify that subset, which could have implications for autism beyond FOXG1 syndrome.